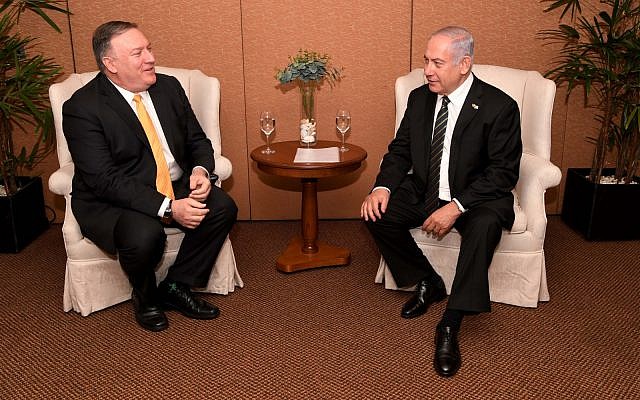 Pompeo met Netanyahu on Tuesday in Brasilia, where both men are attending the inauguration of Brazilian President Jair Bolsonaru. The discussion is another sign that US agencies may be slowing or even trying to halt implementation of Trump’s command, issued suddenly after a December 14 phone call with Turkish President Recep Tayyip Erdoğan.

On Monday, US officials said Trump’s 30-day timetable for departure had been pushed out to four months.

Netanyahu has expressed concern that Trump’s announcement is an abandonment of the attempt to limit the influence of Iran, an essential ally of the Assad regime. Israel had regularly carried out airstrikes to disrupt Iranian operations, including the transfer of missiles and other weapons to Hezbollah, and Netanyahu has demanded the departure of all Iranian military personnel.

Pompeo said on Tuesday that the US will continue countering Iran in the Middle East, assuring that Trump’s order
“in no way changes anything that this administration is working on alongside Israel”: “The counter-ISIS campaign continues, our efforts to counter Iranian aggression continue and our commitment to Middle East stability and the protection of Israel continues in the same way it did before that decision was made.”

Netanyahu said before the meeting:

We’re going to be discussing our, the intense cooperation between Israel and the United States which will also deal with the questions following the decision, the American decision, on Syria and how to intensify even further our intelligence and operational cooperation in Syria and elsewhere to block Iranian aggression in the Middle East.

He pointedly added that Israel was very appreciative of the “strong…unequivocal support” Pompeo gave in recent days to Israel’s “efforts at self defense against Syria”.

State Department spokesman Robert Palladino said the meeting “discussed the unacceptable threat that regional aggression and provocation by Iran and its agents poses to Israeli and regional security”.

US National Security Advisor John Bolton, a hard-line foe of the Islamic Republic, travels to Turkey and Israel for discussions next week.

Turkey’s priority is its effort to remove the Kurdish militia YPG, the leading force in the US-led Syrian Democratic Forces, from northern Syria. US withdrawal opens the way for a Turkish-rebel offensive to move into some of the 27% of Syria held by Kurdish factions; however, Erdoğan is reportedly concerned that a sudden American departure would allow pro-Assad forces to reoccupy territory quickly.