Iran Daily: Rouhani — We Are Not Afraid of US Sanctions 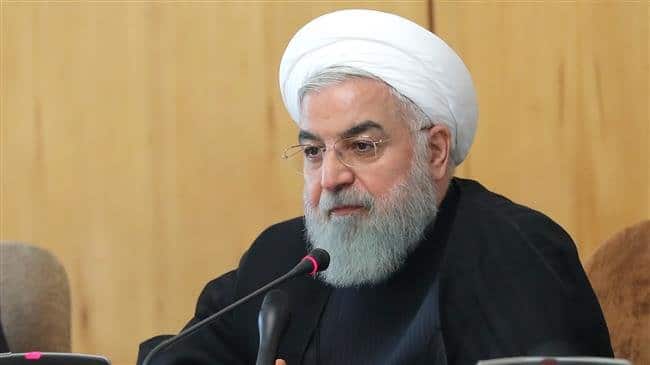 President Hassan Rouhani has insisted that Iran does not fear comprehensive US sanctions which take effect from Sunday.

Addressing the Cabinet on Wednesday, Rouhani said of the sanctions, ordered by Donald Trump in May as he withdrew the US from the 2015 nuclear agreement between Iran and the 5+1 Powers (US, UK, France, Germany, China, and Russia):

November 4 this year translates into a new instance of oppression by America. Our people need to rest assure that the government is not afraid of US threats.

Iran was already facing difficulties with production, investment, trade, employment, and currency before Washington stepped up its pressure. The impending sanctions have helped cut Iran’s oil exports — which provide almost half of Government revenue — by 40% since April. A further drop is expected next week as South Korea and Japan halt imports and China suspends purchases by two large State companies.

Annual inflation, which had been reduced to single digits by the Rouhani Government, is now 37%. The Iranian rial has fallen 70% against the US dollar and is dropping again after a brief recovery. The International Monetary Fund has replaced a projection of 4% growth with a forecast of 1.5% contraction this year and 3.6% in 2019.

But Rouhani continued with his line, echoing the Supreme Leader, that it is the US which is under pressure:

We are certain that the Americans will fail in their new plot, and that they are actually in gradual retreat….

The US will raise hue and cry for a few days, but will have to eventually leave, because they cannot make decisions for the people of the region.

Even as the impending sanctions shrank Iran’s oil exports to 1.1 million barrels per day in early October, from the high of more than 2.5 million bpd this spring — and as Tehran is trying to sell crude on the stock market — Rouhani asserted, “We tell them that ‘you will not reach any of your goals with regard to Iran’s oil sales. You will neither be able to bring it to zero nor reduce it’.”

India has reportedly agreed with the US to cut imports of Iranian oil by one-third until March 2019.

Washington has agreed a waiver for India from sanctions, according to “sources familiar with the matter”.

Indian companies can import about 1.25 million tons of oil per month.

India imported about 22 million tons of crude oil from Iran in 2017-18 and planned to raise this to about 30 million tons in 2018-19 before the announcement of comprehensive US sanctions.

India and Iran still have to figure out shipping and insurance details to continue trade.

In a marker of the scale of Iran’s difficulties, Iranian State media are treating the reduction as a victory: “India Gets US Waiver to Continue Iran Oil Imports“.