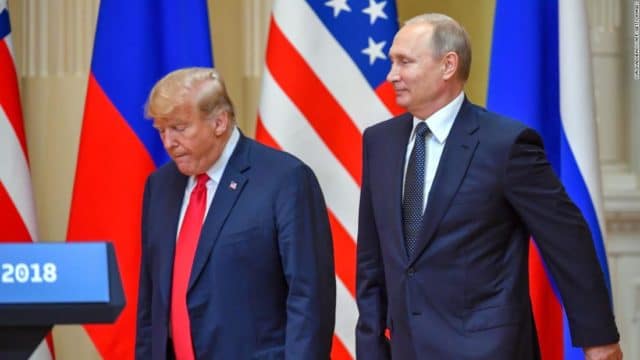 The US Justice Department accuses allies of the Kremlin, following its intervention in the 2016 Presidential elections, of interfering in November’s mid-term ballots.

Federal prosecutors unsealed charges on Friday against an operative of a close ally of President Vladimir Putin, labelling her the “chief accountant” in the campaign of “information warfare”.

Elena Alekseevna Khusyaynova has managed a multimillion-dollar budget since April 2014 for the effort, the criminal complaint alleged. It asserted that she bought internet domain names and Facebook and Instagram ads, spent money to build Twitter accounts, and paid for promotion of divisive posts on social media.

Khusyaynova works for several entities owned by Yevgeny Prigozhin, known as “Putin’s chef”, who was among 13 Russians indicted in February by Special Counsel Robert Mueller over Russian interference in the 2016 vote.

Prosecutors said that, as in 2016, “Project Lakhta” sought to raise tensions through posts on immigration, guns, race relations, women, and the debate over “Take A Knee” protests by National Football League players during the National Anthem.

“The conspiracy has a strategic goal, which continues to this day, to sow division and discord in the US political system,” FBI Special Agent David Holt wrote in an affidavit.

In contrast to the support for Donald Trump, operatives have not backed a particular candidate this year. But the complaint said that the campaign — with smoother messaging and a better command of US political discourse than in 2016 — included targeted campaigns against Trump’s opponents and other politicians.

Operatives instructed colleagues to frame Senator John McCain, who died in August, as an “anti-Trump geezer”. House Speaker Paul Ryan should be described as “an absolute nobody”.

Attacks were directed at Republicans who failed to adequately promote Trump’s Wall with Mexico. Strict voter identification laws, especially in “blue states” favoring Democrats, were to be promoted. In line with the efforts of Trump and the White House, Special Counsel Mueller’s Trump-Russia investigation was to be undermined by highlighting “scandals that took place when Mueller headed the FBI”, and operatives would “emphasize that the work of this commission is damaging to the country and is aimed to declare impeachment of Trump”.

Some instructions were racist. One member said of posts aimed at lesbian, gay, bisexual and transgender groups: “Colored LGBT are less sophisticated than white; therefore, complicated phrases and messages do not work.”

Khashoggi was killed inside the Saudi Consulate in Istanbul, Turkey on October 2 after he sought a document for his upcoming marriage. The Saudis initially denied any involvement, posting faked images of the journalist leaving the Consulate.

Under pressure, Riyadh finally acknowledged Khashoggi’s death on Friday, but said it was because “discussions did not go as required”. The Arabic version of the statement says he was killed in a “fist fight”.

Eighteen people have been arrested, and two senior advisors dismissed.

#STATEMENT | On the case of the disappearance of the Saudi citizen Jamal bin Ahmed Khashoggi pic.twitter.com/RmgOwtYdNW