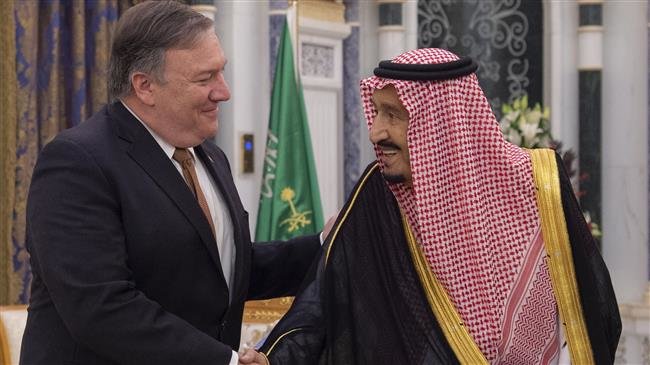 Khashoggi disappeared on October 2 after he entered the Consulate to obtain documents for his marriage to fiancée Hatice Cengiz. Turkish officials say he was killed and dismembered.

Podcast: Saudi Arabia, the US, and Khashoggi’s Disappearance

The Trump Administration was initially reticent. Then Trump indicated last week that he would take no action, as Khashoggi was a permanent resident and a citizen of the US — and as he did not want to lose a $110 billion arms sale to Saudi Arabia, announced during Trump’s visit to Riyadh in May 2017.

Over the weekend, Trump spoke of “severe punishment” if the Saudi monarchy was found responsible. However, after a 20-minute phone call with King Salman on Monday, he deflected blame onto “rogue killers”.

On Tuesday, he made clear his backing of the King and his son the Crown Prince: “Here we go again with you’re guilty until proven innocent.”

The comment was a clear echo of Trump’s defense this autumn of his Supreme Court nominee Brett Kavanaugh, accused by three women of sexual assaults in the 1980s. The Republican leadership finally pushed through Kavanaugh’s confirmation earlier this month, without a full investigation of the claims.

Trump’s support of the Saudi monarchy came hours after US Secretary of State Mike Pompeo arrived in Riyadh. He smiled and shooking hands with Mohammed bin Salman and, in a statement, twice thanked the King — including for a supposed promise of a “thorough, transparent, and timely investigation” into Khashoggi’s disappearance.

Turkish authorities were finally allowed into the Saudi Consulate on Monday night for a nine-hour inspection, but only after a cleaning crew had entered the premises earlier in the day. Turkish officials said yesterday that they had evidence of an attempt to cover up a crime scene. President Recep Tayyip Erdoğan told reporters that investigators are looking into “toxic materials, and those materials being removed by painting them over”.

Meanwhile, several Saudi suspects named by Turkey are close to the Crown Prince. One is a frequent companion, inlcuding on trips to the US, France, and Spain. Three others are linked to Mohammad bin Salman’s security detail.

A fifth is a forensic doctor who holds a senior position in the Interior Ministry.

The New York Times reported on Wednesday that it has confirmed independently that at least nine of the 15 Saudi suspects have worked for the Saudi security services, military, or other government ministries. One of them, Maher Abdulaziz Mutreb, is a diplomat who was assigned to the Saudi Embassy in London and who has traveled extensively with the Crown Prince.

The Washington Post, for whom Khashoggi was a columnist, said 11 of the 15 suspects are part of the Saudi security services. It cites Khalid Aedh Alotaibi, a member of the Saudi Royal Guard who has accompanied King Salman and Mohammad bin Salman on US trips.

But none of the claims are likely to shake Trump. After Pompeo’s meeting with the King and Crown Prince, the President tweeted:

Just spoke with the Crown Prince of Saudi Arabia who totally denied any knowledge of what took place in their Turkish Consulate. He was with Secretary of State Mike Pompeo…