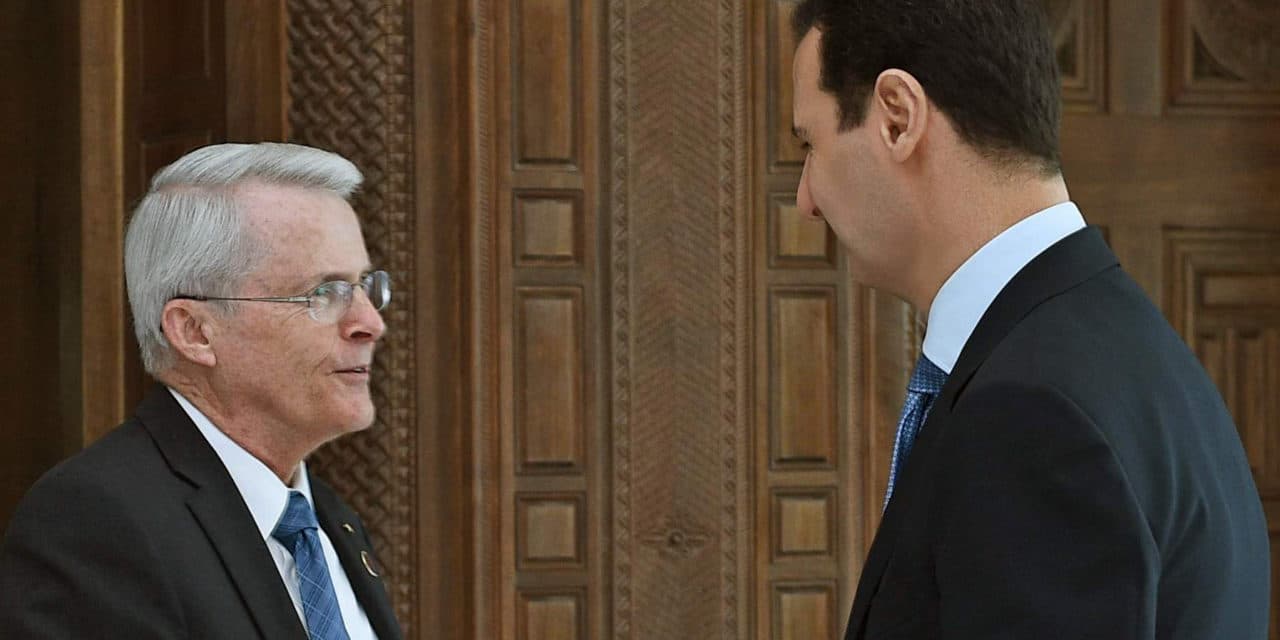 Using a US State Senator, Iran is pushing a conspiracy theory to support a Russia-Assad regime offensive on Idlib Province, the last major opposition area in Syria.

The prop for Ambassador Alireza Jahangiri is Virginia State Senator Richard Black, who was hosted by the Assad regime this week to put out the false claim.

Black is a long-time supporter of the regime and has often been used by Damascus to proclaim that it has international support from politicians, even in Western countries.

US senator: Britain's #MI6 is planning a #fake chemical weapons attack on #Syria. This proves what has been said many times in the #OPCW’s meetings. If the world takes such statements seriously, we will not see any disasters like the Iraq war. https://t.co/4cOcBafjSl

Following advances elsewhere in Syria this spring and summer, Russia and the Assad regime had hoped to overrun Idlib and northern Hama Provinces in the northwest. While deploying personnel for the assault, they had been setting up the pretext of a “false flag” chemical attack by rebels and White Helmets rescuers, supported by US and British special forces.

The “false flag” pretext has been used in previous Russia-regime offensives — including on eastern Aleppo city in late 2016 and on East Ghouta near Damascus this spring — to justify assaults and to provide cover for the regime’s own chemical attacks.

The latest campaign has been pressed by the Russian Defense Ministry and Russian State outlets with a series of false statements — including declarations of several “false flag” attacks that never occurred — and by pro-Assad and pro-Kremlin activists on social media.

Black has done his part with an interview with the Lebanese pro-Assad outlet al-Mayadeen: “Around four weeks ago, we knew that British intelligence was working towards a chemical attack in order to blame the Syrian government, to hold Syria responsible.”

The Senator, little known before his promotion of Bashar al-Assad, has also been interviewed by The Washington Post. He added to the Assad regime’s long-running effort to denigrate White Helmets rescuers:

From what I can tell, they have been planning a fake attack, not a genuine one, but one where they actually move people out of a town and they have trained people to portray victims of a gas attack. And the plan is to use the White Helmets who have always been involved in these notorious deceptions, to portray an attack.

Assad regime media are also headlining the comments of another backer, US Senator Tulsi Gabbard of Hawaii, who ignored Idlib’s civilians — half of them displaced from other areas of Syria — and reduced all rebels to “Al Qa’eda” and “jihadists” in a statement to the chamber on Thursday:

But the Russian-regime offensive, despite the efforts of Black, Gabbard, and other supporters, is running into difficulties. Turkey is holding out against any assault on Idlib, as the UN warns of a “humanitarian catastrophe” that could displace up to 800,000 of the province’s estimated 3 million residents.