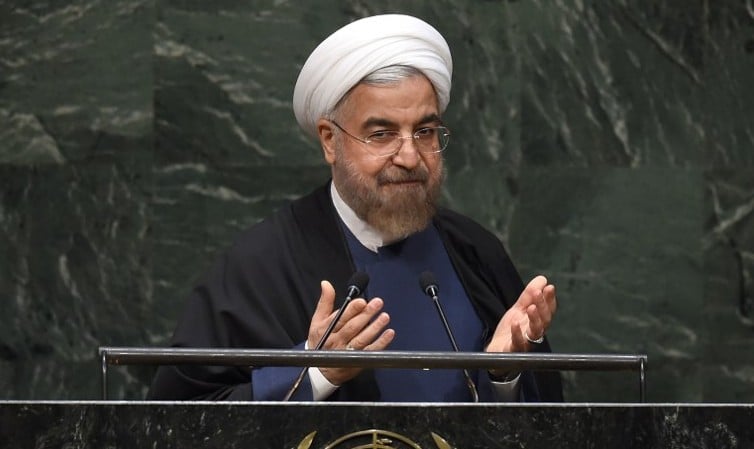 “The US understanding of international relations is authoritarian.”

Iran’s President Hassan Rouhani has used his speech to the UN General Assembly to denounce US sanctions on Tehran as “economic terrorism”.

Rouhani focused on the restrictions which are seeking to break Iran’s economy, with Donald Trump withdrawing from the 2015 nuclear agreement in May and announcing comprehensive measures by November 5:

Unlawful unilateral sanctions in themselves constitute a form of economic terrorism and a breach of the right to development.

The economic war that the United States has initiated under the rubric of new sanctions not only targets the Iranian people but also entails harmful repercussions for the people of other countries, and that war has caused a disruption in the state of global trade.

The President maintained the line that, despite an economic crisis fostered by long-term internal problems as well as the sanctions, the Islamic Republic will triumph over Washington:

The Iranian people have demonstrated their unwavering resilience during the past forty years despite the difficulties and constraints caused by sanctions, and have shown that they can overcome this difficult phase as well. The multi-millennial history of our country demonstrates that Iran and Iranians have never broken in the face of a storm of events — not even been bowed.

Earlier on Tuesday, Trump used his speech to the Assembly to urge the isolation of Iran. In contrast, Rouhani focused on a message of unity in cooperation — “No war, no sanctions, no threats, no bullying; just acting according to the law and the fulfillment of obligations. The world will not have a better friend than Iran, if peace is what you seek.”

For dialogue to take place there is no need for a photo opportunity. Dialogue can resume in this #UNGA from the same point & by the same party who left the accord. Beginning a dialogue starts w/ ending threats & unjust sanctions negating principles of ethics & international law.

The US understanding of international relations is authoritarian. In its estimation, might makes right. Its understanding of power, not of legal and legitimate authority, is reflected in bullying and imposition. No state and nation can be brought to the negotiating table by force, and if so, what follows is the accumulation in the ‘grapes of wrath’ of those nations, to be reaped later by the oppressors.

There have been shows of support for Iran and the nuclear agreement in New York, notably the European Union’s proclamation, alongside Foreign Minister Mohammad Javad Zarif, of financial measures to get around the US sanctions.

But the EU is limited in the protection it can give European companies because of the threat of US punishment of any firm that continues business with Tehran.

The Iranian currency is continuing its historic decline, with a fall of almost 10% today and 17% since Monday.

The currency has now lost 75% of its value since January, when it was at an already historically low point of 45,000:1.

Government measures have been unable to halt the fall. They include declaration of a new foreign exchange market, raising interest rates on savings, and a crackdown on officials and unofficial currency dealers with special Revolutionary Courts and no appeals of sentences.

With inflation resurgent and production crippled, the Government is reportedly considering rationing of food and essential items.

India, one of Iran’s primary customers, is halting imports of Iranian oil from November as comprehensive US sanctions take effect.

The cutoff is another blow to Tehran’s attempts to maintain oil revenues. South Korea and Japan, two of its top five buyers, have already halted imports. That leaves China as the lifeline for the Islamic Republic, for whom oil exports provide 80% of Government funds.

Indian Oil and Bharat Petroleum, India’s two largest state-owned refiners, have not asked for cargoes for loading in November. Nayara Energy does not plan any purchases, an industry executive said. Mangalore Refinery and Petrochemicals has not made any nominations, but may do so later, according to a company official.

Iran’s oil exports have fallen 30% since April, from 2.5 million barrel per days to below 2 million bpd. Analysts have predicted that, with the advent of US sanctions, exports will drop 40% to 1.5 million bpd.

But the Indian decision, and uncertainty over China, raises the prospects of greater decline.

“Iranian exports may drop below 1 million barrels a day in November, with Indian refiners potentially loading nothing and China cutting back as well,” Amrita Sen, chief oil analyst at Energy Aspects, said in a note to clients.