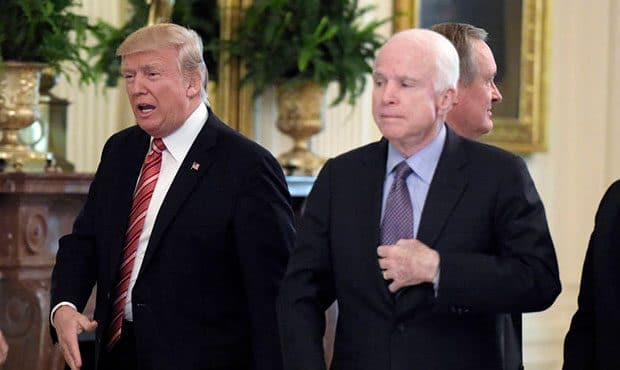 Developments on Day 571 of the Trump Administration:

Trump has repeatedly insulted McCain, a pilot who was a POW in North Vietnam for 5 1/2 years, mocking the Senator as “not a war hero” for being weak in “allowing” himself to be captured. Trump’s anger was further fuelled by McCain’s decisive vote last year preventing the repeal of ObamaCare.

But both he and Vice President Mike Pence pointedly declined to mention McCain:

Trump avoided military service during the Vietnam War by claiming bone spurs in his feet.

Hours after the Fort Drum event, Trump launched another verbal attack on McCain, who was diagnosed with glioblastoma, a rare brain cancer, last year. He referred to the ObamaCare vote, “One of our wonderful senators said ‘thumbs down’ at two o’clock in the morning.”

McCain said in a statement:

I'm proud the NDAA is now law & humbled Congress chose to designate it in my name. As Chairman of the Armed Services Cmte, I've found high purpose in service of a cause greater than self—the cause of our troops who defend America & all that she stands for. https://t.co/Gco9E57HdC

He did not comment on Trump’s remarks, but his daughter Meghan, a conservative commentator, said Trump had been “gross and pathetic.”