TrumpWatch, Day 530: Trump Lies About Border Security, Journalists, and His “Many Best-Selling Books” 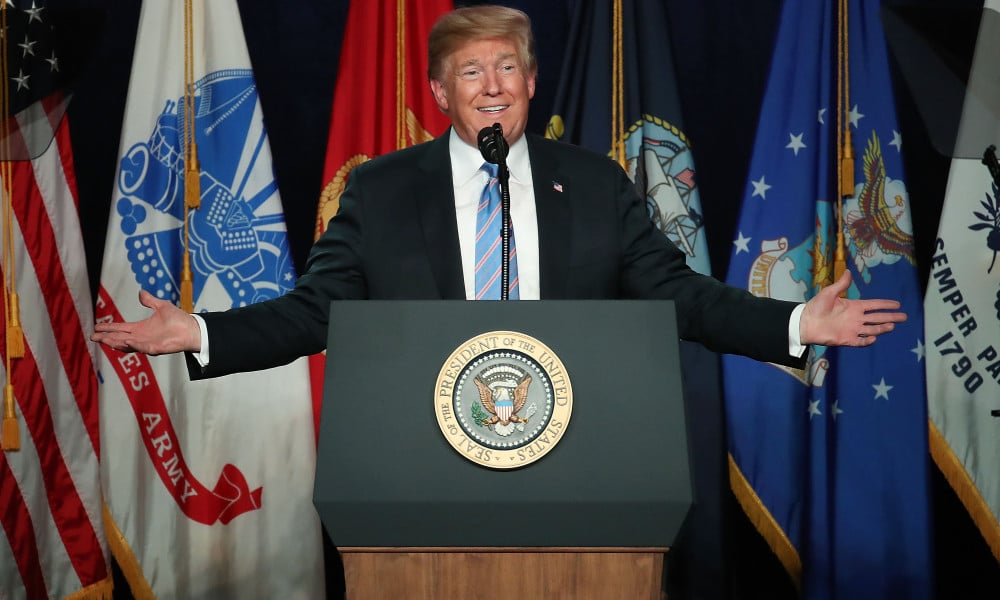 Setting up his Adminstration’s campaign for Congressional elections in November, Donald Trump lies about border security in a denunciation of Democrats.

In a day of 17 exclamation-filled tweets, Trump began with the falsehood that his opponents want to abolish security at the borders — an assertion which also tries to shift attention from the Administration’s separation and detention of immigrant children and parents:

Many Democrats are deeply concerned about the fact that their “leadership” wants to denounce and abandon the great men and women of ICE, thereby declaring war on Law & Order. These people will be voting for Republicans in November and, in many cases, joining the Republican Party!

While some Democrats have called for an end to Immigration and Customs Enforcement, seen as implementing the harsh crackdown of the Administration, legislators and activists are seeking its replacement with an agency which will also observe the legal rights of undocumented immigrants.

See also Trump Order: No Reunion of Separated Immigrant Families Without Acceptance of Deportation
Video: The Detained Children Representing Themselves in Immigration Court

On Monday, in a possible violation of Federal law, the official White House Twitter account lashed out at Democrat Senators Elizabeth Warren and Kamala Harris for their pursuit of the reform of border enforcement and highlighting of the conditions in children’s detention centers.

Far from stepping back, Trump stepped up the tactics of hardline advisor Stephen Miller to promote “zero tolerance” by insulting and lying about opponents. He railed over another Democrat representative, “crazy Maxine Waters”, again reduced undocumented immigrants to vermin by proclaiming “an ‘infestation’ of MS-13 GANGS”, and doubled down on his assault:

How can the Democrats, who are weak on the Border and weak on Crime, do well in November. The people of our Country want and demand Safety and Security, while the Democrats are more interested in ripping apart and demeaning (and not properly funding) our great Law Enforcement!

He repeated the deception — including his lie that ICE is “liberating towns” from undocumented immigrations in a Wednesday night speech in West Virginia:

5 Days After 5 Journalists Were Killed….

Five days after five staff were shot dead at a Maryland newspaper, Trump renewed his denigration of journalists.

Showing an ignorance — either wilful or unwitting — of how media operates, and lying about the non-existence of sources, Trump lashed out:

The Washington Post is constantly quoting “anonymous sources” that do not exist. Rarely do they use the name of anyone because there is no one to give them the kind of negative quote that they are looking for. They are a disgrace to journalism but then again, so are many others!

It is unclear which Post story upset Trump, but reports this week have highlighted the possible cooperation of former Trump attorney Michael Cohen with prosecutors, including in the Trump-Russia investigation.

In an interview with ABC News, Cohen said his “first loyalty” is to family and country, rather than Trump.

From Witch Hunt to Iran to “Great Books”

Trump also betrayed his worry about the Russia inquiry by misrepresenting a deletion of call records by the National Security Agency, which collects electronic and communications intelligence:

The NSA did not remove any “phone calls” or “text messages”. The deletions were of telephone numbers and times of calls.

The agency, which can only collect information of communications involving a foreign actor, said its analysts had noted “technical irregularities” in some of the data received from telephone companies, leading to the production of some call detail records that the agency “was not authorized to receive”.

Trump also blatantly distorted a domestic dispute inside Iran to try and portray a betrayal by the Obama Administration of US interests.

A hardline cleric, Mojtaba Zolnour, attacked the Rouhani Government and the 2015 nuclear deal by declaring that Obama’s officials had granted citizenship to 2,500 Iranians, including the children of officials.

The statement was made through Fars, the outlet of the Revolutionary Guards, Iran’s elite military force who are in a power struggle with the Government.

Ignoring the domestic context, the single source, and altering the statement, Trump chided:

Just out that the Obama Administration granted citizenship, during the terrible Iran Deal negotiation, to 2,500 Iranians – including to government officials. How big (and bad) is that?

But the most unusual shout of Trump — or staff tweeting in his name — was over a supposed lack of respect for his skills as an author. 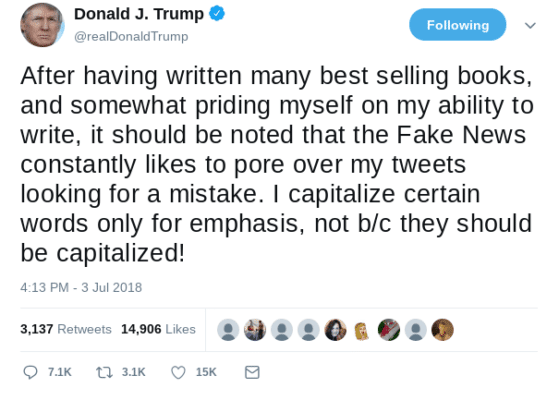 Trump’s “Art of the Deal” was penned by ghostwriter Tony Schwartz, who said in 2016, “I put lipstick on a pig.”

J.K. Rowling, the author of the Harry Potter series, offered this assessment:

Defying Donald Trump’s shouts of “Witch Hunt”, the Senate Intelligence Committee has issued a report of further evidence to support the US intelligence community’s assessment that Russia interfered in the 2016 Presidential election to help elect Trump.

The Committee, with a Republican majority, said “information obtained subsequent to publication” of the January 2017 report by US intelligence agencies “provides further support” to the conclusion of the “sound intelligence product”:
“The committee finds that the overall judgments issued…were well-supported and the tradecraft was strong.”

Richard Burr, the Committee’s GOP chairman, said it “sees no reason to dispute the conclusions” of the January 2017 report. Democrat vice-chairman Mark Warner said, “The Russian effort was extensive and sophisticated, and its goals were to undermine public faith in the democratic process, to hurt Secretary Clinton and to help Donald Trump.”

A schoolteacher has approached scandal-ridden Environmental Protection Agency head Scott Pruitt in a Washington restaurant: “Hi! I just wanted to urge you to resign.”

Kristin Mink, holding her 2-year-old son, introduced Pruitt to him:

Pruitt has gutted the EPA’s protection, slashing staff and stripping back environmental, health, and safety regulations. A denier of human-based climate change, he has ordered the agency to give up its attention to the issue.

Meanwhile, Pruitt has been involved in a series of controversies about claimed abuse of power. He has paid $50 per month for a rental in a condo owned by the wife of an energy lobbyist. He has ordered staff to obtain goods for him, including a used mattress from a Trump Hotel and tickets for US football’s Super Bowl.

Earlier this week it was revealed that Pruitt kept a “secret” calendar of his meetings, including with energy lobbyists and a Catholic Cardinal accused of sexual offenses, while ordering staff to scrub the official EPA record.

You’ve been paying about 50 bucks a night to stay in a DC condo that’s connected to an energy lobbying firm, while approving their dirty sands pipeline.

We deserve to have somebody at the EPA who actually does protect our environment, somebody who believes in climate change and takes it seriously, for the benefit of all of us, including our children.

Pruitt left the restaurant without responding.