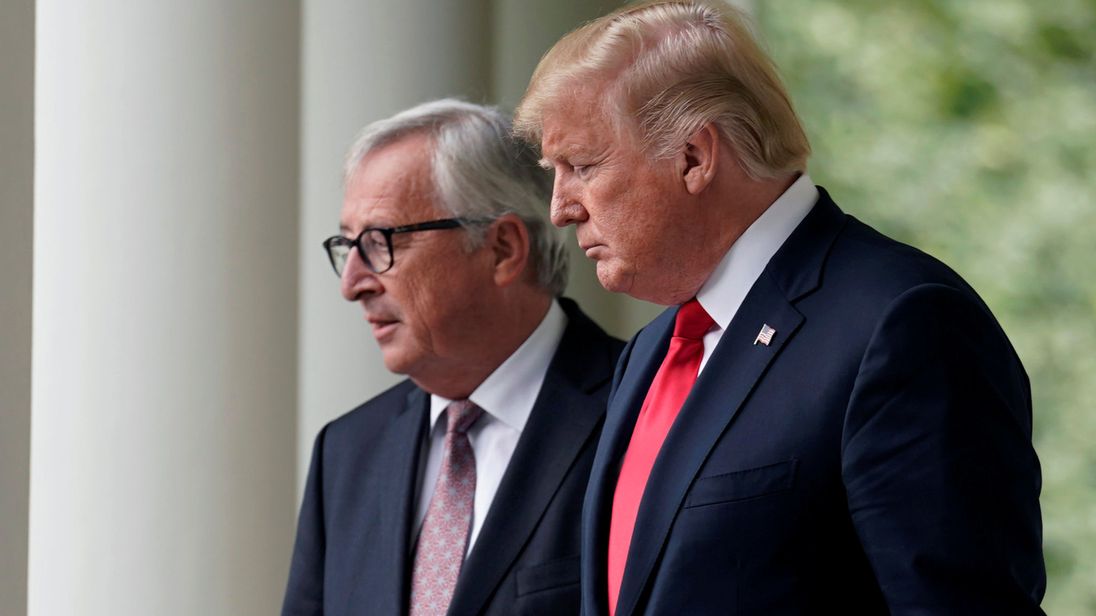 The European Union gives Donald Trump some space over his threatened trade wars, with a meeting in Washington producing rhetoric about tariff reductions.

The President of the European Commission, Jean-Claude Juncker, saw Trump on Wednesday amid the Administration’s imposition of steel and aluminum duties and Trump’s consideration of tariffs on automobiles, notably from Germany. Trump has also launched a conflict with China, with duties on $36 billion of goods and threats to punish more than $400 billion more.

But on Thursday, Trump and Juncker said they would work for lower tariffs and other trade barriers, with the EU leader saying Europe will buy billions of dollars of American soybeans and natural gas.

Trump said,“We’re starting the negotiation right now, but we know very much where it’s going.

Only on Tuesday, Trump had proclaimed via tweet, “Tariffs are the greatest!”. But by the end of the day — whether from a swing in emotion or a foreshadowing of the statement with Juncker, he suggested, “Both the U.S. and the E.U. drop all Tariffs, Barriers and Subsidies!”

The EU’s tactics allowed Trump supporters to claim an immediate victory from the threatened trade wars, but any “concessions” are minor. With China’s retaliatory tariffs making it difficult for US soybean farmers to sell there, Europe can step in with purchases. European countries were already hoping to diversify natural gas suppliers, amid tensions with Russia; however, increased purchases from the US is dependent on construction of more American export terminals, which will take years.

There was also no rollback of the Trump tariffs on steel and aluminum, imposed on $7.7 billion of EU production, and on the EU’s retaliatory measures on $3.3 billion of US products such as jeans, motorcycles, and bourbon whiskey.

Still, Trump could switch from his labelling of the EU as America’s primary “foe” to hailing “a new phase in the relationship between the United States and the European Union”. And there was no repetition of his castigation of Germany and Chancellor Angela Merkel, which dominated his recent trip to the NATO summit in Brussels and to the UK.

Some analysts expressed caution over Trump’s sudden shift in behavior. They noted that Trump has twice rejected trade deals with China and then imposed more tariffs.

And some Republican legislators from farm states were unnerved that they had been summoned to the White House, for what they thought would be talking on limiting the damage of the tariffs on China, only to be ushered into the Trump-Juncker appearance.

“We arrived there and then we became eye candy on the set,” said Senator Pat Roberts of Kansas.

But others were happy to declare victory. Rep. Michael Conaway of Texas, he chairman of the House Agriculture Committee, said:

There’s an emotional uplift, because this is the first big breakthrough….[This] demonstrates the president believes he’s on the right track, and it’s hard to argue that he’s not.