TrumpWatch, Day 515: Trump Lashes Out to Maintain Separation of Children from Parents 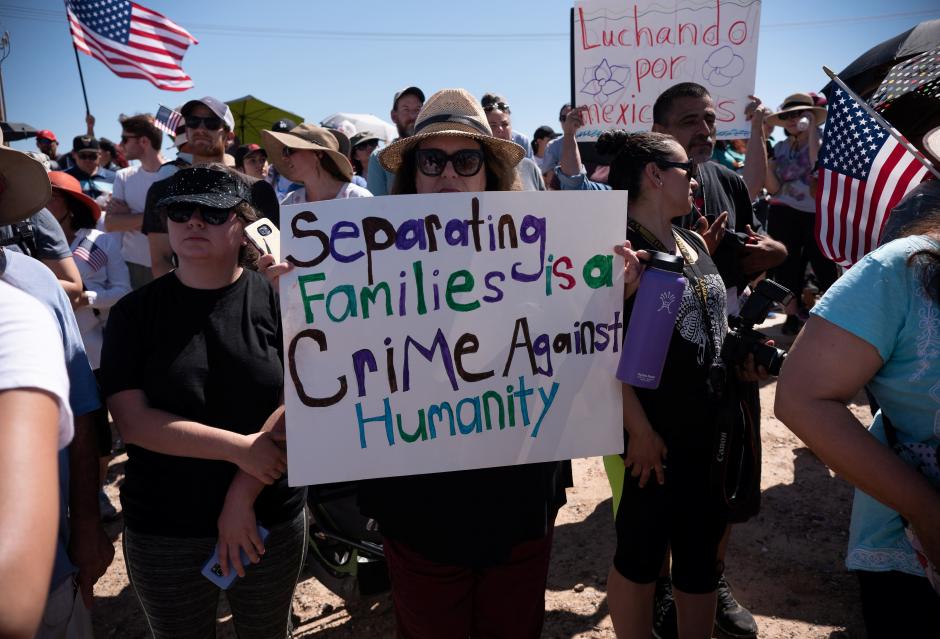 Trump: “They could be murderers and thieves and so much else”

Developments on Day 515 of the Trump Administration:

Despite growing criticism and further revelations over the detention of immigrant children, Donald Trump maintains his policy of separating them from their parents.

Trump tried a series of tactics. He repeated his lie that the separations are not a result of his Administration’s policy, announced by Attorney General Jeff Sessions in April, but are due to a (non-existent) “law” passed by Democrats. He invoked the specter of the MS-13 gang, often used by Trump to cover condemnation of all undocumented immigrants. He stirred up political uncertainty in Germany, where Chancellor Angela Merkel is facing a challenge within her coalition goverment over immigration, by claiming — falsely — that “crime in Germany is way up” (in fact, crime is at its lowest rate since reunification in 1990).

Most of all, Trump used the children as hostages, implicitly saying that their situation would be resolved if Democrats would accept his conditions for legislation granting $25 billion for a Wall with Mexico, sharp reductions in legal immigration and admission of refugees, an end to the Visa Diversity Lottery program, and a ban on immigrants bringing relatives to the US. He combined all his approaches, albeit with checking his spelling:

It is the Democrats fault for being weak and ineffective with Boarder Security and Crime. Tell them to start thinking about the people devastated by Crime coming from illegal immigration. Change the laws!

Trump described immigrants, including the children and parents, to reporters, “They could be murderers and thieves and so much else. We want a safe country, and it starts with the borders, and that’s the way it is.”

Homeland Security Director Kirstjen Nielsen, under pressure from Trump over “border security” to the point where she reportedly consider resignation, continued her own deceptive comments. Having said falsely on Sunday, “We do not have a policy of separating families at the border. Period,” she held a press conference yesterday:

DHS Sec. Nielsen:"What has changed is that we no longer exempt entire classes of people who break the law. Everyone is subject to prosecution." But she still won't admit it is Trump policy they are enforcing. https://t.co/7KtmhQBU5J pic.twitter.com/uoc4neBEte

Nielsen put out the distorted line, “Parents who entered illegally are by definition criminals. By entering our country illegally, often in dangerous circumstances, illegal immigrants have put their children at risk.”

In fact, border crossers have the legal right to present themselves at a port of entry to make a case for asylum. But, under the Trump Administration’s “no tolerance” policy, they are being detained before they can reach the port or being told that there is no space for applicants and sent back to wait indefinitely in border camps.

Meanwhile audio, secretly recorded by journalists of ProPublica, of children traumatized as they are taken from their parents at the border. A border patrol officer says, “Well, we have an orchestra here, right? What we’re missing is a conductor.”

A Growing Whisper from the GOP

Republican legislators have been slow to join the pushback against the policy, which has seized almost 2,000 children in six weeks.

But on Sunday, Senator Susan Collins objected, and several Representatives joined the critics yesterday. Steve Stivers of Ohio, who leads the House Republicans’ campaign arm, warned that if the policy is not changed, he would support “means to stop unnecessary separation of children from their parents”.

Fred Upton of Michigan denounced the “ugly and inhumane practice”. Mario Diaz-Balart of Florida said the separations are “totally unacceptable”. Mia Love of Utah, whose parents emigrated from Haiti, rejected the “horrible” policy:

As a mother of three children and daughter of immigrant parents, this is something that’s both very tangible and heartbreaking to me. This is not a partisan issue — it’s an issue of right or wrong.

Senator Ted Cruz of Texas, a Presidential candidate in 2016, said on Monday that he will propose legislation to double the number of federal immigration judges and authorize new temporary shelters so that families can remain together while their cases are expedited through immigration courts.

None of this had any apparent effect on Trump, even as a reported dispute within the White House delayed Press Secretary Sarah Huckabee Sanders’ briefing by more than three hours. Instead, Trump used former allies as a whipping boy, “We don’t want what is happening with immigration in Europe to happen with us!”, and reduced his approach to three words:

We don’t want what is happening with immigration in Europe to happen with us!

The next political round will come on Tuesday when Trump meets legislators. Then on Thursday, the House of Representatives will consider two measures: one a hard-line package which will give the Administration many of its demands, the other a compromise which also provides a path to citizenship for almost 800,000 “Dreamers”, children who came to the US with their undocumented immigrant parents.