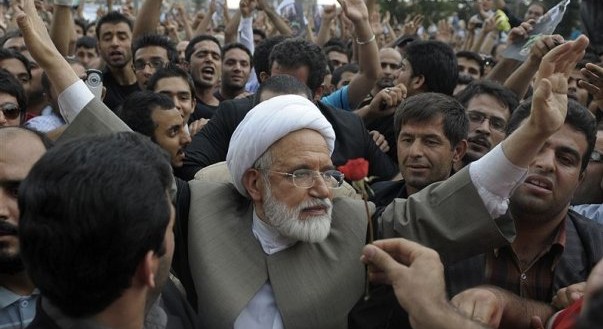 Wind in My Hair: One Iranian Woman’s Struggle Against the Hijab

Iranian cleric Mehdi Karroubi, one of three opposition leaders held under strict house arrest for more than seven years, has said that only death will bring his freedom.

Karroubi, who turned 80 last September, was detained with fellow leaders Mir Hossein Mousavi and Zahra Rahnavard in February 2011, with Iran’s regime’s fearing a resurgence of the mass protests after the disputed 2009 Presidential election.

Karroubi and Mousavi were both candidates in that election, “won” by President Mahmoud Ahmadinejad with the backing of the Supreme Leader. Mousavi’s wife Rahnavard, also prominent in the Green Movement formed during that campaign and amid the protests, is a noted academic and artists.

Karroubi’s wife Fatemeh was also held but released later in the year.

The cleric wrote in an open letter to members of the National Trust Party, which he launched in 2005:

This illegal and unauthorized house arrest has been going on for [almost] eight years and apparently there’s no end to this arrogant action.

No one considers himself accountable. The way things are going, it seems our fate will be determined by the angel of death, Azrael.

Karroubi again asked the NTP to accept his resignation as Secretary General.

President Hassan Rouhani, in his 2013 Presidential campaign, said he would pursue the freedom of the Green Movement leaders as part of the release of political prisoners; however, he was quickly rebuffed by the Supreme Leader, who said house arrest was a merciful alternative to the executions that the trio deserved. Individual MPs like the conservative maverick Ali Motahari have also failed to get a trial.

In his open letter, Karroubi described the 2009 election of Ahmadinejad as a “rubber-stamped joke”:

When he was installed as President for a second time by adding seven million to his votes… the people’s protests…were violently suppressed and we entered a new phase.

We paid a heavy price for writing letters to the officials and the people warning them about the consequences of the violent crackdown on the protests.

Karroubi was hospitalized several times for heart-related problems in summer 2017.

Last month, some regime officials said Rahnavard had refused an offer for some of the restrictions on her to be lifted. The activist denied the report and pledged to remain in solidarity with the other leaders: