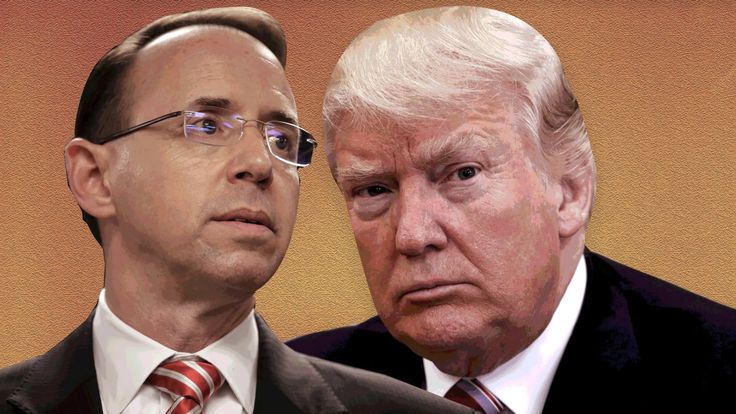 Angered by an exposé of more meetings between his top advisors and representatives of foreign powers during and after the 2016 election — and worried about an FBI counter-intelligence agent in contact with some of his aides, under suspicion over Russian links — Donald Trump threatens the Justice Department on Twitter.

A storm of eight Tweets culminated in Trump’s promise — likely to be in violation of the Constitution — that he would steer the Department away from the Trump-Russia inquiry onto other matters:

I hereby demand, and will do so officially tomorrow, that the Department of Justice look into whether or not the FBI/DOJ infiltrated or surveilled the Trump Campaign for Political Purposes – and if any such demands or requests were made by people within the Obama Administration!

Since early 2017, Trump and his aides have tried to block the expanding Russian inquiry with allegations that the Obama Administration and agencies “spied” on the campaign. An initial attempt to claim the Administration had placed wiretaps inside Trump Tower was soon exposed as unfounded, but the Trump camp has persisted in claims that an FBI warrent to surveil Russian officials — and a Trump campaign advisor, Carter Page, suspected of being a Russian agent since 2013 — was not obtained properly from the top-secret FISA (Foreign Intelligence Surveillance Act) court.

The Trump camp have distorted this operation with a claim that the FBI inserted a “spy” into the campaign. Against the opposition of the Justice Department on security ground, they have demanded that the name of the agent, an American academic in the UK, be revealed.

In his Sunday tweets, Trump also berated the FBI and the Justice Department for not focusing on Democratic nominee Hillary Clinton, her chief of staff John Podesta and his brother, and the Democratic National Committee:

What ever happened to the Server, at the center of so much Corruption, that the Democratic National Committee REFUSED to hand over to the hard charging (except in the case of Democrats) FBI? They broke into homes & offices early in the morning, but were afraid to take the Server?

Trump’s threatened order to the Justice Department, which is an independent body and not under the direction of the President, is the latest possibility of a political and Constitutional crisis amid the Trump-Russia investigation. Non-compliance by Deputy Attorney General Rod Rosenstein, who oversees the inquiry, could lead to Trump’s attempt to dismiss him. That in turn would pave the way for Rosenstein’s replacement to fire Special Counsel Robert Mueller.

But Rosenstein moved quickly to stem that scenario, offering Trump the crumb of the Justice Department’s Inspector General looking into the matter: “If anyone did infiltrate or surveil participants in a presidential campaign for inappropriate purposes, we need to know about it and take appropriate action.”

Justice Department and FBI officials have already used contacts with the media in recent weeks to assure that there was no impropriety in the handling of the counter-intelligence agent.

Triggered by a New Revelation

Trump was triggered on Sunday morning by a new revelation pointing to another front in the Trump-Russia investigation.

The New York Times reported that Donald Trump Jr. and other campaign aides met envoy George Nader, representing the UAE and Saudi Arabia, and Israel social media specialist Joel Zamel about intervention on behalf of Trump in the final months of the campaign.

After the election, Nader remained in contact with high-level Trump officials, proposed a plan to challenge Iran and brokering a meeting in January 2017 between Eric Prince — founder of the Blackwater paramilitary firm and a close ally of the Trump camp — and Kirill Dmitriev, a Russian wealth fund manager with ties to President Vladimir Putin.

Trump opened Sunday with the blast:

Things are really getting ridiculous. The Failing and Crooked (but not as Crooked as Hillary Clinton) @nytimes has done a long & boring story indicating that the World’s most expensive Witch Hunt has found nothing on Russia & me so now they are looking at the rest of the World!

Despite his wife Melania having just returned to the White House after several days in hospital for kidney treatment, Trump then spent the next hour firing off tweets. He returned a few hours later with his complaint, “The Witch Hunt finds no Collusion with Russia – so now they’re looking at the rest of the World. Oh’ great!”, and the pledge to make the Justice Department look elsewhere.