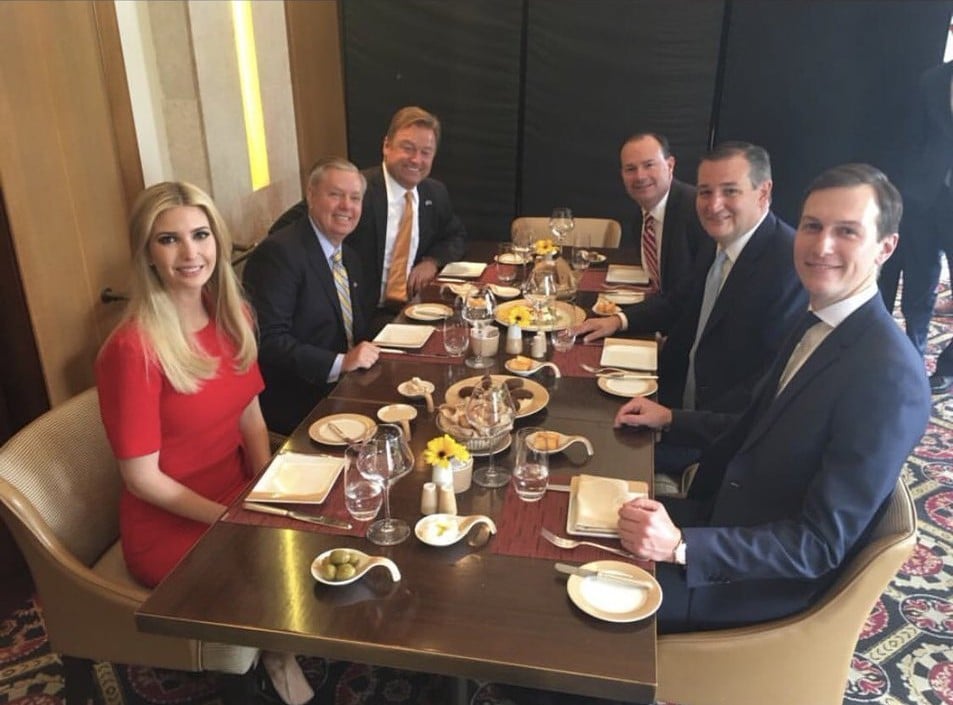 Trump Ignores Killings While Hailing US Embassy in Jerusalem

Donald Trump has celebrated the opening of the US Embassy in Jerusalem but ignored an immediate consequence, as Israeli security forces killed at least 58 Palestinians and wounded more than 2,700 at the Gaza border.

Even before Trump’s daughter Ivanka and son-in-law Jared Kushner — who has hailed himself as the man who will bring “Middle Eastern peace” — spoke at the Embassy ceremony, Palestinians who had gathered were being killed by live fire. Almost all of those killed and more than half of those injured were struck by bullets.

See also Stop Telling Palestinians to Be Resilient — The World Has Failed Them
Podcast: Palestinians Isolated as US Puts Embassy in Jerusalem

Tens of thousands of Palestinians took part in the Gaza protests. Rather than criticizing the killings, Trump’s White House blamed Hamas, the group in control of Gaza, for organizing the demonstrations.

Protests also took place on the West Bank, which is controlled by the Fatah party.

The Israeli military claimed that some in the crowds were planting or hurling explosives, and that many were flying flaming kites into Israel, with at least one kite igniting a wildfire outside the Nahal Oz kibbutz. A spokesman for the Israeli Defense Forces, Lt. Colonel Jonathan Conricus, questioned the casualty figures, asserting that a large number of the injured had suffered only tear-gas inhalation.

Among the casualties were a slain Palestinian paramedic and an injured Canadian doctor, who wrote:

Despite our efforts to clearly identify ourselves as first responders, several of our medical team were wounded by Israeli live fire. One paramedic, Musa Abuhassanin, was killed while attempting a victim rescue under fire. One hour before he was shot in the thorax and killed, Musa was one of my rescuers when I was shot by live ammunition. I sustained a moderate injury to my left leg and a minor one to the right leg….He had a great laugh and was a good paramedic.

What happened today is unacceptable and inhuman. The death toll provided this evening by Gaza health authorities…is staggering. It is unbearable to witness such a massive number of unarmed people being shot in such a short time….

This bloodbath is the continuation of the Israeli army’s policy during the last seven weeks: shooting with live ammunition at demonstrators, on the assumption that anyone approaching the separation fence is a legitimate target. Most of the wounded will be condemned to suffer lifelong injuries.

Most of our wounded patients in #Gaza say they have nothing to lose, no hope, no jobs. They tell our @msf staff that they just want 2 go back & die at protest sites. Some returning 2 demonstrations w/ casts, on crutches, or w/ external fixators holding together shattered bones.

A journalist ducks after a sniper’s bullet passes by:

This happened too – pretty sure elites snipers know what and where they are targeting pic.twitter.com/faRx8GxcKd

Kushner: “Journey to Peace Started with a Strong America”

None of this appeared to concern Trump, who opened Monday by promoting his friends at Fox TV as well as his allies in Israel:

U.S. Embassy opening in Jerusalem will be covered live on @FoxNews & @FoxBusiness. Lead up to 9:00 A.M. (eastern) event has already begun. A great day for Israel!

He tweeted a couple of hours later, “Big day for Israel. Congratulations!”, and then he — or a staff member — posted video of the ceremony. It was his last mention of the events.

In a recorded video message for the ceremony, Trump — in a statement taking on unintended irony as the day progressed — said the US “remains fully committed to facilitating a lasting peace agreement”.

Kushner also contributed in his speech, “When there is peace in this region, we will look back upon this day and will remember that the journey to peace started with a strong America recognizing the truth.”

However, Trump’s son-in-law did go farther with an implicit reference to what was happening at the Gaza border, “Those provoking violence are part of the problem and not part of the solution.”

He did not identify those who were “provoking violence”.

Back in Washington, Secretary of State Mike Pompeo was silent.

When we asked SecState Pompeo if he had anything to say –anything– on the violence in Israel right now… he turned his back, and walked away.

Did Trump Lift US Sanctions on Chinese Company Because of Conflict of Interest?

The Huffington Post offers another possibility for Donald Trump’s sudden shift on economic measures against China.

On Sunday, Trump ordered the Commerce Department to lift a seven-year ban on US components to XTE, China’s second-largest manufacturer of smartphones, imposed the firm lied about repayment of a $1.2 billion fine for violating American sanctions on Iran.

Trump’s intervention appeared to be linked to a threat by Chinese Vice Premier Liu He to cancel a trip to Washington on Tuesday for further talks about US tariffs imposed on Beijing in late March.

But The Huffington Post noted last week that an Indonesian theme park resort, in which the Trump Organization has an interest, signed a deal for another $500 million in Chinese Government loans.

The Trump Organization has a franchise deal to license its name to the MNC Lido City, project outside Jakarta.

The Education Department has “effectively killed investigations” into fraud and abuse by for-profit colleges, according to “current and former employees”.

The team of about a dozen lawyers and investigators has been reduced to only three, and its mission has been changed to processing student loan forgiveness applications and examining smaller compliance cases.

The supervisor of the team is Julian Schmoke, a former dean at DeVry University, now known as Adtalem Global Education. He was selected by Education Secretary Betsy DeVos after an investigation in DeVry was halted last year.

DeVry agreed to a $100 million settlement in 2016 in a Federal Trade Commission lawsuit that alleged its ads about employment and salaries after graduation misled prospective students,

Former employees of Bridgepoint Education and Career Education Corp. also began working for DeVos after investigations into those companies were ended.