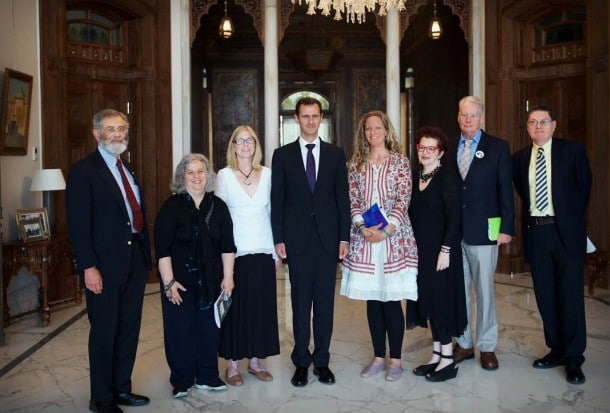 How Russia and its social media allies are “running interference for the Assad regime” with latest false claims and attacks on rescuers, journalists, and activists

Bethania Palma writes for Snopes, the site specializing in debunking of false claims and conspiracy theories, with a contribution from EA: “Scott Lucas noted that there has been an overlap between pro-Assad trolling, disinformation, and propaganda and support for the regime from the American alt-right and far right.”

On 7 April 2018, reports began emerging from the opposition-held city of Douma, east of the Syrian capital of Damascus, that scores of civilians had been killed and hundreds injured in a chemical attack. In response to mounting global criticism, the Russian government, which has allied with the regime of Syrian president Bashar al-Assad, ramped up its military-grade propaganda machine in an ongoing to attempt to obfuscate facts.

Although no blame has yet been officially ascribed, this latest deadly attack in the now seven-year Syrian civil war is not unique. The Assad regime has for years been condemned for using chemical weapons against civilians. In 2013 the regime was accused of using sarin, a nerve agent, in an attack that killed more than 1,400 people in Ghouta….

The disinformation machines have cranked up their propaganda offensive in response to criticism. Russia’s state-funded networks like TASS and RT began churning out stories reflecting the government’s talking points….

Official Russian government channels are not the only sources of misleading information. [There are] a coterie of Western social media personalities and bloggers who have concentrated their efforts on running interference for the Assad regime.

Although their motivations are not entirely clear, they generally fall under three categories — people who cling to what they consider anti-imperialist views and fear potential Western-led regime change in Syria, people who equate current events in Syria with the lead-up to the 2003 Iraq war, and another group of activists who, without explanation, have migrated their activism from support for Palestinians in Gaza to support for the Assad regime.

These bloggers have actively participated in campaigns to denigrate the White Helmets, even opining the rescuers are legitimate military targets….