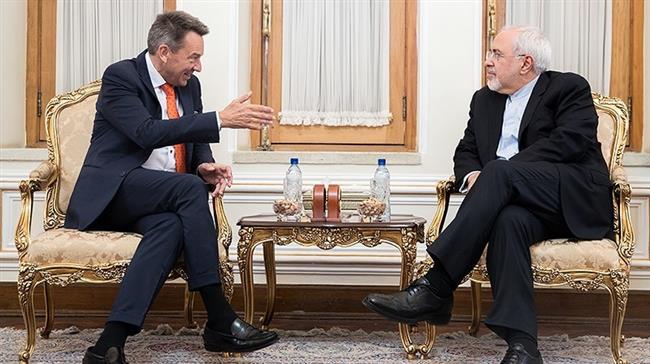 Iran’s Foreign Secretary Mohammad Javad Zarif has condemned bombing of Yemen’s civilians, while avoiding any statement over Tehran’s support of attacks in Syria by the Assad regime and Russia.

Zarif issued the statements in a meeting with Red Cross President Peter Mauer in Tehran on Sunday. He asserted, “The Islamic Republic of Iran will make its utmost efforts to alleviate the pain and suffering of the war-stricken people of Syria and Yemen and dispatch humanitarian aid to the two countries’ people.”

He denounced the Saudi-led military intervention in Yemen from 2015, backing the Government against an insurgency by Ansar Allah (Houthis) which took the capital Sana’a and much of the country. Thousands of civilians have been slain, and millions are at risk from shortages of food and supplies amid a blockade by Saudi Arabia and its allies.

Zarif said, “It is imperative for the international community to get more effectively involved in ending the senseless aerial attacks and establishing a ceasefire.” He declared that Iran is ready to cooperate with the UN “to facilitate and encourage an immediate end to these senseless bombardments and initiation of a genuine dialogue to find a political solution to this tragic crisis”.

The Foreign Minister did not make a similar commitment to a ceasefire in Syria, where Iran’s allies have killed about 1,400 people and wounded thousands since February 1 in an assault on East Ghouta near Damascus. Nor did he explain how his call for “humanitarian aid” can be reconciled with the five-year siege on the opposition-held area.

State English-language outlet Press TV tries to cover Zarif’s differing approaches by referring to a January 30 statement by senior advisor Hossein Jabari Ansari, “Iranian forces entered Syria at the request of the Syrian government in order to help Syrian government in the battle against terrorism.”

On Saturday, the Supreme Leader sought deflection from the Assad regime’s chemical attacks on East Ghouta, with at least seven chlorine assaults since January 13, with blame on Western countries for support of Saddam Hussein as Iraq used chemical weapons on Iranian forces in their 1980s war.

Maurer hailed a positive meeting with Zarif in a tweet:

The official also wrote about “an impressive display of [Iranian] search and rescue capabilities” and an agreement “on our joint humanitarian actions”. He praised a meeting with a conservative Iranian ayatollah about “the important contribution of Islamic scholars to build understanding and respect for humanitarian values”.

Maurer did not refer to either Yemen or Syria.

Backing the Supreme Leader’s statement as well as the Assad regime and Russia, Iranian media is stepping up false claims.

Mehr’s attack on the White Helmets was initiated by pro-Assad British agitator Vanessa Beeley, presented as a “journalist” in her polemic in Russia’s Sputnik, and then promoted by the Assad regime’s outlet SANA. Sputnik also posted the chemical workshop disinformation, citing Fars, the outlet of Iran’s Revolutionary Guards.

The BBC is appealing to the UN Human Rights Council to stop Iran’s harassment of BBC Persian staff in London and their families in Iran.

Iranian authorities have been pursuing a campaign of intimidation and threats against staff, including arrests of relatives, travel bans, seizure of property, and disinformation over sexual behavior.

The regime has targeted BBC Persian since the disputed 2009 Presidential election, when it blamed mass protests on interference by the service and other foreign outlets.

Former BBC employee Nazanin Zaghari-Ratcliffe was seized in April 2016 and is serving a five-year prison sentence for espionage, with no evidence produced to support the claim. BBC Persian staff are unable to travel to Iran — for example, to attend to sick relatives or visit them in hospital or to go to funerals — for fear of arrest.

An estimated 18 million Iranians, a quarter of the population, regularly use the BBC’s Persian service online, on radio, or on satellite television.

Narges Hosseini, handed a two-year sentence last week for her protest over compulsory hijab, has said the punishment will not stop her.

Hosseini was the second woman to take off her hijab and wave it on the end of a stick in Enghelab (Revolution) Street in Tehran. The protests, which began in late December, soon spread across Iran.

Tehran Prosecutor Abbas Jafari Dolatabadi said last Wednesday that Hosseini attempted to “encourage corruption through the removal of the hijab in public”.

Hosseini spent 20 days in prison after her early January protests before was released on bail of 600 million rials (about $16,000). She is expected to serve three months of her sentence, with the other 21 suspended.

Hosseini said she was “shocked by the verdict” — “I did not expect to be condemned to prison and paying a huge fine” — but “even though I have been convicted, I believe more than ever that the compulsory hijab law in Iran should be resisted”.

Iranian authorities said they detained 29 women over the protests, with the Supreme Leader accusing foreign “enemies” of fomenting the women’s demonstrations and implicitly criticizing President Hassan Rouhani for advocating a more lenient line over hijab.