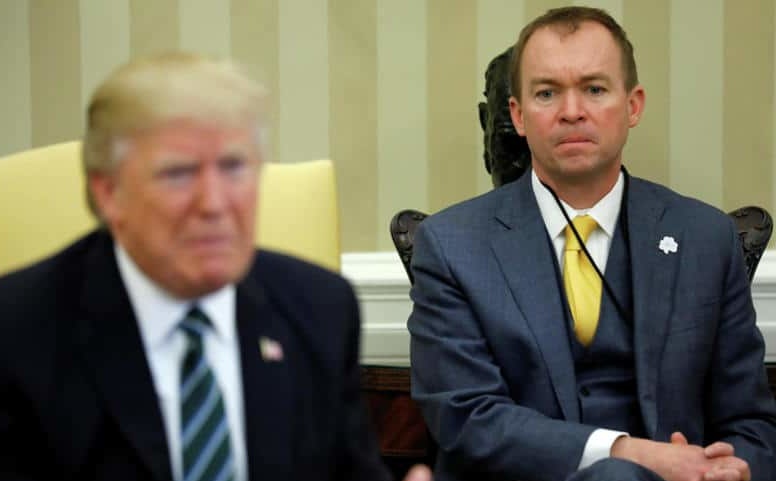 Developments on Day 388 of the Trump Administration:

Donald Trump will unveil a budget plan on Monday which — unsurprisingly, in light of a $1.5 trillion tax cut and last week’s Congressional authorization of more spending on the military and domestic programs — will give up on the long-held goal of eliminating the Federal Government’s annual budget deficit over the next decade.

Instead of reducing the deficit, the actions of the Trump Administration and Republican legislators will produce an annual gap of $1.1 trillion by fiscal year 2019, according to Government estimates.

The deficit in FY 2017, under the final budget of the Obama Administration, was $666 billion.

The Trump Administration has still to produce a final budget after more than a year in office. But in December, it finally got its first major legislative victory with the $1.5 trillion tax changes. That plan is projected to add $1.4 trillion alone to the Government deficit by 2027.

The situation was compounded by the recurrent need, without a confirmed budget, to get Congressional authorization of supplemental funding to keep the Federal Government open. The fifth authorization was reached on Monday with the guaranteed allocation of about $500 billion over two years to the military and to domestic programs such as infrastructure, disaster relief, and child care.

Trump’s draft budget still has sharp reductions for almost all Government agencies except the military, homeland security, and veterans. Proposals would slash funds for the State Department and Environmental Protection Agency by about 30%, and there will also be significant cuts for agriculture, education, housing, and programs for low-income Americans.

Medicaid and the Supplemental Nutrition Assistance Program are also being targeted for spending decreases.
However, “people familiar with the proposal” said there is no possibility of elimination of the deficit by 2028.

Some conservative GOP lawmakers have complained about the outcome. Last week they unsuccessfully tried to block the military-domestic spending agreement and the raising of the Federal Government’s debt ceiling.

The US Government has about $20 trillion of accumulated debt.

Defying all projections, the White House maintained on Sunday that the budget “imposes a fiscal discipline on Washington spending that many in today’s political climate reject, yet which remains more important than ever”.

Meanwhile, Donald Trump railed on Twitter that he is not being fairly represented:

So many positive things going on for the U.S.A. and the Fake News Media just doesn’t want to go there. Same negative stories over and over again! No wonder the People no longer trust the media, whose approval ratings are correctly at their lowest levels in history! #MAGA

Arrests Double of Immigrants With No Criminal Convictions

Encouraged by Donald Trump and his Administration, Immigration and Customs Enforcement officers have doubled the arrests of immigrants with no previous criminal convictions.

The agency made 37,734 “noncriminal” arrests in the Government’s 2017 fiscal year. The category includes suspects facing possible charges as well as those without criminal records.

The number is part of a 40% surge in detentions by the ICE since Trump took office.

Those facing deportation who show up for periodic “check-ins” with ICE to appeal for more time in the US can now be detained. Officers are detaining suspects in courthouses more often. Street-level ICE officers and field directors have greater latitude to determine whom they arrest and under what conditions, taking additional people into custody when they knock on doors to arrest a targeted person.

In June, a Virginia mother was sent back after her 11 years in the US because of a traffic stop. A Connecticut man with an American-born wife and children and no criminal record was deported to Guatemala last week.

Last month, US District Judge Katherine Forrest rebuked the ICE over the arrest of an immigration activist in New York, Ravi Ragbir:

It ought not to be — and it has never before been — that those who have lived without incident in this country for years are subjected to treatment we associate with regimes we revile as unjust.

We are not that country.

The State Department has lost almost 12% of its foreign affairs officers since Donald Trump took office.

Observers say the decline reflects low morale and dissatisfaction with Secretary of State Rex Tillerson’s treatment of the career workforce.

The overall civilian workforce at the State Department shrunk about 6.3% between September 2016 and September 2017.

The attrition has been particularly great among experienced staff. More than 16% of civilian employees with 25 or more years of service left in the nine months up to September.