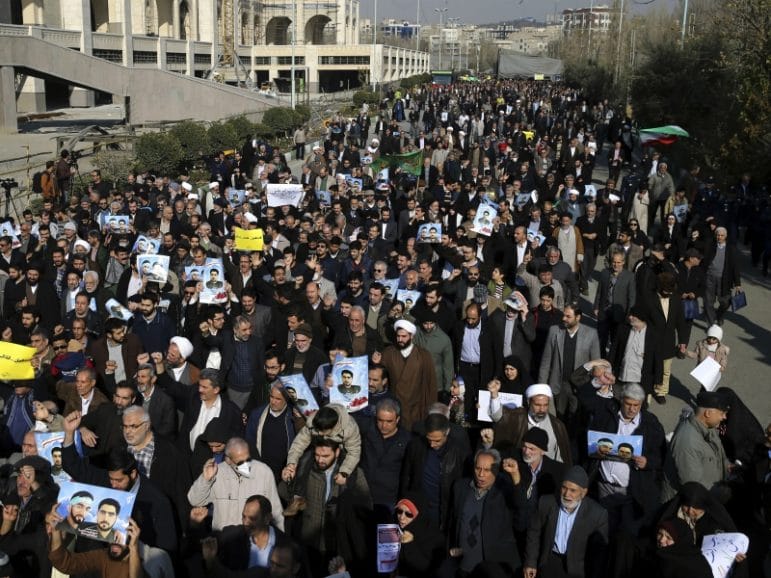 UPDATE 1730 GMT: The regime is continuing with its proclamation of supportive rallies and enemy plots.

State media proclaims a fourth straight day of marches, claiming “thousands” in gatherings in Tehran; Sari, Amol, and Semnan in the north; Ilam in the west; and Kerman in the south.

The Secretary of Iran’s Expediency Council, Mohsen Rezaei, is the latest high-level official to put out the regime’s tale of a foreign-instigated hijacking of demonstration.

Expanding the explanation circulated on Friday by a Prosecutor General, Rezaei said officials from CIA, the Saudi regime, and even the “Barzani family” — political leaders in Iraqi Kurdistan — and Saddam Hussein’s brother-in-law worked with the “terrorist” Mojahedin-e Khalq Organization (MKO).

Rezaei said a secret meeting in Erbil in Iraqi Kurdistan planned “to take control of most of Iranian cities from the government so they could smuggle weapons into the country to kill a number of people and then pressure the UN Security Council to impose new sanctions against Iran under the pretext of human rights”.

In a second phase, the plotters would prepare for the entry of MKO members to further unsettle the regime.

No Iranian official has provided any evidence so far to support the story.

More than a week after the spread of protests across the country, Iran’s regime has tried to stage a counter-rally to overshadow the dissent, only to face ongoing demonstrations.

The regime displayed a march by thousands of people after Tehran Friday Prayers, the third straight day of organized events trying to show that most Iranians support it despite the political and economic issues raised by demonstrators

Tehran Friday Prayer leader Ayatollah Ahmad Khatami told authorities to deal “firmly” with organizers of protests. However, in contrast to the approach taken by the regime towards mass protest after the disputed 2009 Presidential election, Khatami, a hardline cleric, conferred legitimacy on the causes of the demonstrations — and applied some pressure on the Government — by calling on it to “pay more attention to people’s economic problems”.

The regime, which initially tried to ignore the show of dissent that began on December 28 in Iran’s second city Mashhad, is trying to limit the presentation of protest to economic matters. The approach would both insulate the Supreme Leader, who has been the target of criticism in many demonstrations, and put the onus on President Hassan Rouhani to act.

At the same time, Khatami and other regime officials whipped up the spectre of Iran’s “enemies” hijacking the protests by supporting “violence” among a minority. The cleric spoke of “those ordinary Iranians who were deceived by these American-backed rioters”. Public Prosecutor Mohammad Jafar Montazeri proclaimed a plot masterminded by the US, Israel, and Saudi Arabia which began four years ago and was developed in Herat, Afghanistan — interestingly, an area of Iranian influence — and in Erbil in northern Iraq.

But the regime efforts have not yet suppressed the demonstrations. While footage has been slower to get out of Iran because of the regime’s restrictions on communications, videos on Friday showed more gatherings in Tehran and other cities.

The rally in Tehran last evening:

In Tabriz, during a football match, “The people of Azerbaijan reject suffering and abjection”. Fars News, linked to the Revolutionary Guards, insist that the crowd’s shout “A person with no honor” was aimed at the referee and not regime officials:

In Masjed Soleiman in Khuzestan Province in western Iran, mourning the killing of two protesters:

In Khomein, the birthplace of the founder of the Islamic Republic, Ayatollah Rouhollah Khomeini, a crowd praised the former monarch of Iran, “God bless your soul Reza Shah”.

At the UN Security Council, in an emergency session arranged over Russia’s objections, US Ambassador Nikki Haley said Iranian people should be supporteed because they are “rising up” for something their government “cannot deny them…their human rights”: “The Iranian regime is now on notice: The world is watching.”

But most Security Council members, including US allies, were cautious in their statements. While Britain also challenged Iran’s leaders over human rights, others set aside backing of the demonstrations with calls for moderation:

#UK, #France, #Sweden, #Netherlands at Security Council did not condemn #Iran regime nor expressed solidarity w/protestors. They called for dialogue & no violence on both sides.#IranProtests