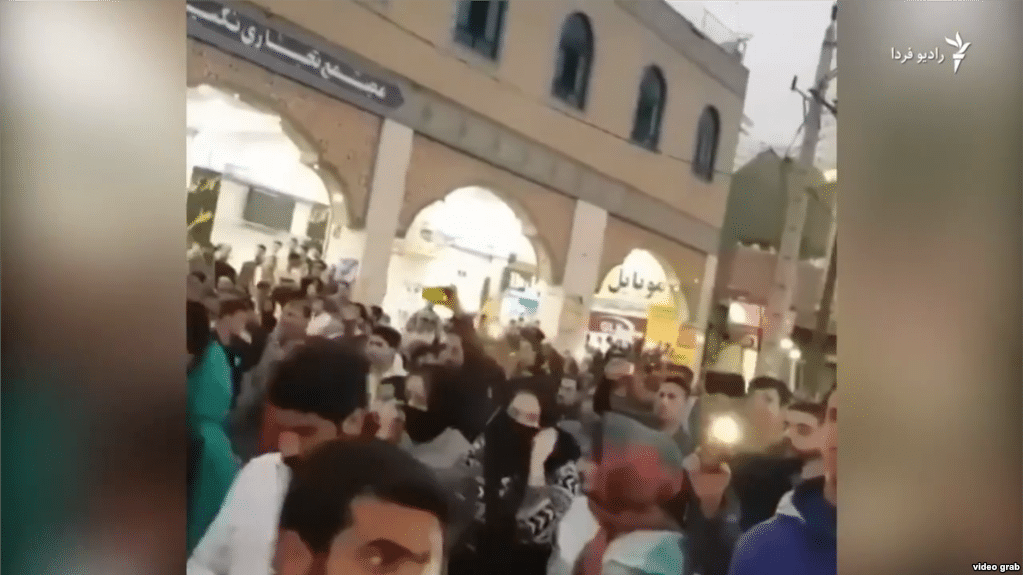 UPDATE 2100 GMT: The Iranian regime has put out its story of the foreign conspiracy which it says is behind the protests.

Public Prosecutor Mohammad Jafar Montazeri proclaimed a plot masterminded by the US, Israel, and Saudi Arabia which began four years ago.

He said the “main mastermind” was “Michael Andrea”, a “former CIA member in charge of combatting terrorism that formed the group to create unrest: “Michael Andrea along with an officer affiliated to the Mossad spy agency where in charge of masterminding the plot while Saudi Arabia paid for all the expenses.”

In June, The New York Times revealed that Michael D’Andrea, who oversaw operations pursuing Obama bin Laden and the US drone strike campaign, had been put in charge of the CIA’s Iran group for a more muscular approach to covert operations”.

On Thursday, Robert Fisk, a columnist for The Independent of London, put out the conspiracy theory, “Why is Trump’s man in Iran, Michael D’Andrea, Missing from Conversations About the Protests?”

Montazeri said the plot, “Consequential Convergence Doctrine”, had planned demonstrations based on scenarios such as inflation, high costs for services and good, and financial demands on retired people. They were models on the Tunisian and Libyan uprisings of 2011, and prepared through “operation rooms” in Ebril in northern Iraq and Herat in western Afghanistan.

UPDATE 1145 GMT: Iran’s Embassy in the UK has sent an official letter complaining about coverage of the protests.

The Iranian regime is trying to portray the demonstrations as instigated or hijacked by foreign powers.

Iranian authorities, notably the Revolutionary Guards, have long pursued a campaign of intimidation and harassment of staff of BBC Persian and their relatives still in Iran.

However, in line with the Rouhani Government — and in contrast to the approach taken by the regime towards mass protest after the disputed 2009 Presidential election — Khatami, a hardline cleric, said, “Those ordinary Iranians who were deceived by these American-backed rioters should be dealt with based on Islamic clemency.”

Khatami also conferred legitimacy on the causes of the protests, calling on the government to “pay more attention to people’s economic problems”.

ORIGINAL ENTRY: Protests continued in cities across Iran for an eighth day on Thursday. So did arrests, with more than 1,700 people now detained at some point during the demonstrations over political and economic issues.

Meanwhile, the UN Security Council has scheduled an emergency meeting for Friday despite Russian objections. US Ambassador Nikki Haley called for the meeting earlier this week in support of the right to protest: “This is a matter of fundamental human rights for the Iranian people, but it is also a matter of international peace and security.”

Despite the regime’s claims, including from Revolutionary Guards head Gen. Mohammad Ali Jafari, that protests had been quelled, at least three gatherings took place in the capital Tehran. One was on Jomhouri (Republic) Avenue, not far from the Supreme Leader’s residence. Chants included “Not Gaza, not Lebanon, I give my life to Iran”.

There were demonstrations in Shiraz in the south of Iran, Ahvaz and Dezful in the southwest, Aligoodarz in the west, and Noshahr in the north. Protests were also reported for the first time in Tabriz in the predominantly Azeri speaking northwest, with crowds chanting “spring of freedom”.

Lawyer and activist Shirin Ebadi, winner of the 2003 Nobel Peace Prize, suggested civil disobedience, “People should stop paying electricity, water and gas bills. They should not pay their tax. They should withdraw their money from banks.”

Ebadi also appealed to Iran’s security forces, “I call on my dear children in the police forces and the Revolutionary Guards to put down their guns and do not kill their own brothers and sisters. If the country’s situation improves, you would also benefit from it.”

The regime will hope to project its message of ascendancy over the protests with a third straight day of counter-marches on Friday. Today’s event of support is planned for Tehran after Friday prayers.