Who are Britain’s Far-Right Islamophobes Boosted by Trump’s Retweets? 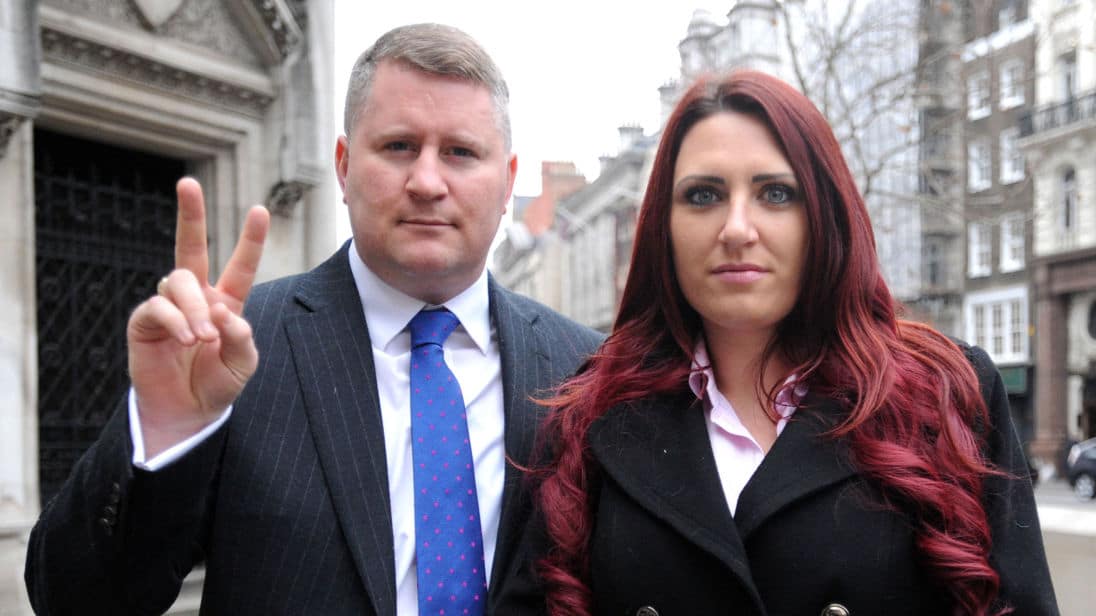 Dr Chris Allen of the University of Birmingham writes for The Conversation:

Donald Trump’s decision to retweet a number of videos originally posted by Jayda Fransen – the deputy leader of the far-right street movement Britain First – was as unfounded as it was unexpected. Retweeted without additional comment, the three videos purported to show a group of Muslims pushing a boy off a roof, another of a Muslim destroying a statue of the Virgin Mary, and finally, an immigrant Muslim violently beating a Dutch boy on crutches.

The authenticity of the videos was quickly thrown into question by the Dutch Embassy in Washington, which claimed the perpetrator in the final video had been born and raised in the Netherlands.

Nevertheless, Fransen celebrated having had her tweets shared with Trump’s 44 million followers on Twitter. Having been arrested and charged earlier in the day for using “threatening, abusive or insulting words or behavior” at a rally in Northern Ireland in August, Fransen tweeted: “God bless you Trump! God bless America!”, before signing off with “OCS” – an abbreviation for Onward Christian Soldiers.

Despite the retweets having been met with near unequivocal condemnation, including an unusually strong statement from Prime Minister Theresa May – who publicly acknowledged Britain First for the first time – what is of most concern is the potential impact that Trump’s endorsement will have in conferring credibility on Britain First and its abhorrent Islamophobic ideology. His tweets have the potential to garner greater and more significant support for the group, which would no doubt strengthen its ranks thereby increasing its reach. That much is evident in the fact that since the retweets, Fransen’s personal Twitter account has been bolstered by an additional 22,000 followers.

To date, in spite of having 1.9 million followers on Facebook Britain First has struggled to mobilize significant numbers of people “in real life”. At many of its rallies and demonstrations, numbers rarely exceed low hundreds at best. From videos on its YouTube page, on most occasions the group comprises no more than a relatively small number of individuals, Fransen being one. It’s possible that with the exposure afforded by Trump’s retweets, more people will make the transition from clickbait to street activist.

Formed in 2011, the group largely failed to make any inroads in the political mainstream. Fransen received just 56 votes when she stood for a parliamentary by-election in 2014.

It has therefore adopted increasingly direct action techniques to make its mark. Britain First, with its roots in the far-right British National Party, has benefited from the demise of the English Defence League, another extreme-right street movement.

The murder of British soldier Lee Rigby in 2013 catalysed the group to become increasingly anti-Muslim while engaging in confrontational publicity seeking activities. These have included undertaking Christian patrols in armored vehicles in densely populated Muslim areas of London and walking through similarly populated areas carrying large white crosses. The group is most notorious for organising mosque invasions, where they confront imams and worshippers, insisting they accept copies of army-issue bibles.

While its direct actions have drawn headlines, it is online where Britain First is most active and has greatest impact. Maximizing the potential of Facebook in particular, the group regularly post memes and images that range from puppies sitting next to the Union flag, to remembering the soldiers who fought to save Britain in the first and second World Wars. Few of these images explicitly refer to the group itself, instead asking people to like and share if they are patriotic or proud of “our boys”. In doing so, many people unwittingly like and share Britain First content without ever knowing what the group stands for.

Defining itself as a political party and street defence organisation, Britain First’s ideology is one of popular nationalism. Drawing upon notions of white supremacy and an end to immigration, most prominent is its message that it offers the “frontline resistance” to the Islamification of Britain.

Britain First differs from other far-right groups in that as well as routinely deploying Christianity and Christian iconography in quite phoney and patronising ways, its founder – James Dowson – is actually a former evangelical Protestant minister. He not only had close ties to loyalist paramilitaries in Northern Ireland, but also vociferously campaigned against abortion. Because of this, the group believes that Christianity is the bedrock of British society and culture. More worrying though is the hierarchy’s belief that the apocalyptic end game is near and that salvation can only be achieved through a war between Christianity and Islam.

While such bizarre beliefs may be easily dismissed, retweets from Trump matter. In sharing Britain First’s messages with millions, the president is potentially bestowing permission to hate on those who hold similar views to Fransen and her group.

It’s possible that Trump will not only confer legitimacy and credibility on Fransen’s tweets but will contribute to creating and enabling environment that seeks to afford legitimacy to public expressions and acts of hostility towards Muslims and their communities.

Trump seems to already bestowing that permission in the US with his rhetoric about a Muslim ban. Now he is doing similar in Britain via Britain First.