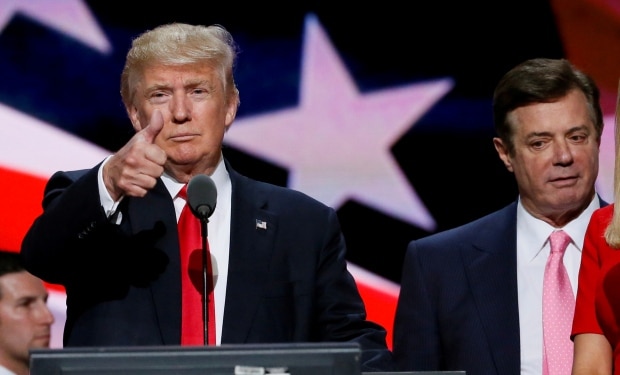 Manafort indictment was expected; guilty plea of campaign staffer Papadopoulos was not

Developments on Day 284 of the Trump Administration:

Donald Trump faces the rising pressure of the Trump-Russia inquiry after the first indictments and guilty plea were announced on Monday.

Former Trump campaign manager Paul Manafort and his top aide Rick Gates surrendered to the FBI in the morning on money-laundering, tax, and foreign lobbying charges linked to Manafort’s alleged diversion of $18 million since 2005 — some of it from connections with Russian and pro-Russian Ukrainian interests.

However, the even more damaging news for Trump was the FBI’s surprise announcement that campaign staffer George Papadopoulos — described by Trump as a “foreign policy advisor” in March 2016 — had pled guilty to lying to investigators. 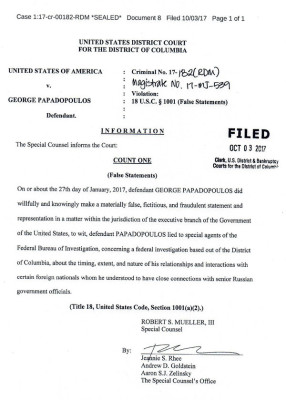 The threat to Trump and his inner circle is that Papadopoulos, arrested in late July but only formally charged for his plea in early October, has spent three months giving information to the FBI and the team of Special Counsel Robert Mueller.

THREAD: What does news that George Papadopoulos pleaded guilty to lying to the FBI mean? (Hint: He's flipping.)

Trump’s staff had anticipated Mueller’s indictment so was ready to claim that his alleged financial crimes occurred long before he was Trump’s campaign manager for five months. His lawyer Jay Sekulow put out the line:

But, apparently surprised by the Papadopoulos development, the White House scrambled to limit the damage. Press Secretary Sarah Huckabee Sanders said that, despite Trump’s description in March 2016 of Papadopoulos’ advisor status — he was an unimportant volunteer and never acted in an “official capacity” when he communicated with the Russians: “[He was a] member of a volunteer advisory council that met one time over the course of a year.”

But that explanations was under immediate strain. Papadopoulos — despite having little experience and listing participation in the Model UN among his qualifications — was a member of Trump’s “national security team” in spring 2016, and documents and the FBI record of his testimony indicate that he carried messages between Russian actors and the campaign.

Aaron S.J. Zelinsky, a prosecutor on the Mueller team said at Papadopoulos’s plea hearing, “There’s a large-scale, ongoing investigation of which this case is a small part.” A line in the court record echoes, “These facts do not constitute all of the facts known to the parties.”

The FBI connected Papadopoulos to alleged Russian-Trump collusion to tarnish Democratic nominee Hillary Clinton. It said the advisor “falsely described his interactions with a certain foreign contact” — a Russian “professor” — “who discussed ‘dirt’ related to [Clinton’s e-mails” in April 2016.

Trump reacted on Monday morning to Manafort’s indictment “Sorry, but this is years ago, before Paul Manafort was part of the Trump campaign. But why aren’t Crooked Hillary & the Dems the focus?????”

….Also, there is NO COLLUSION!

However, since the Papadopoulos news, he has been absent from Twitter. A “Republican close to the White House” said that, as he watched the developments on large TV screens installed in his private residence, Trump was “seething”.

“The President is going, ‘Really, this is the guy?’ ” l said in describing Trump’s reaction to Papadopoulos’ guilty plea.

In a sign of what may come, another former Trump advisor, Carter Page, ventured onto a US outlet and confirmed that he had been in e-mail chains with Papadopoulos. Asked if they concerned Russia, Page said, “It may have come up from time to time.”

Page has been under FBI scrutiny over his contacts with Russians since 2014. In July 2016, amid the possible discussions over Clinton’s e-mails and other operations, he went to Moscow, purportedly in a private capacity.

Why does Carter Page keep giving interviews? This is just brutal. pic.twitter.com/wjo4KfzXQt

The FBI also connected Manafort with Russian interests, albeit long before 2016. It said his lobbying for the pro-Russia Ukrainian People’s Party and its leader Viktor Yanukovych, contributed to funds hidden in bank accounts in Cyprus, the Grenadines, and elsewhere.

The alleged laundering of more than $18 million, was linked to spending such as $5.5 million for a home improvement, more than $1.3 million to clothing stores, and $1 million in carpets. Manafort bought a $3 million brownstone in Brooklyn and a $2.8 million condominium in Manhattan.

The indictment summarized, “Manafort used his hidden overseas wealth to enjoy a lavish lifestyle in the United States without paying taxes on that income….As part of the scheme, Manafort and Gates repeatedly provided false information to financial bookkeepers, tax accountants and legal counsel, among others.”

The charges carry the potential for up to 20 years in prison.

Rick Gates also served on the Trump campaign and inaugural teams, but he was pushed aside in April as the Trump-Russia inquiry escalated.

Both men pled not guilty on Monday.