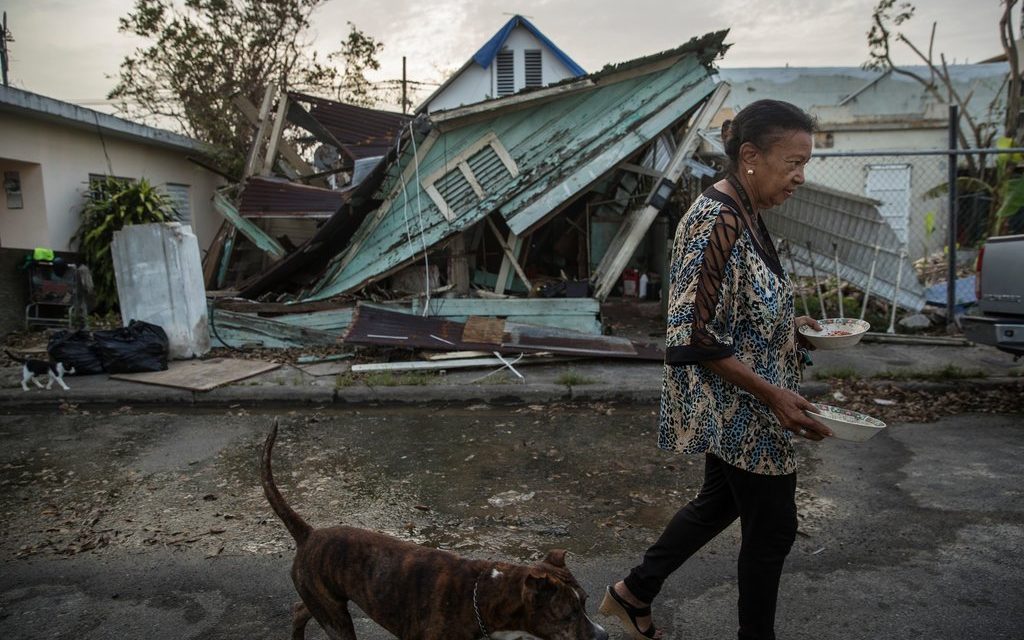 Developments on Day 254 of the Trump Administration:

Unsettled over criticism of the recovery effort in Puerto Rico after Hurricane Maria, Donald Trump vents his fury on the mayor of San Juan, Carmen Yulín Cruz.

Almost two weeks after the hurricane struck, 3.4 million Puerto Ricans are trying to cope with power outages and shortages of food, fuel, and basic supplies. Aid was initially held up, including by a 1920 law barring foreign ships from moving supplies between US ports. Assistance has now reached the capital San Juan, but shortages of truck drivers and washed-out roads are preventing deliveries to scores of other cities, towns, and villages.

Trump was silent for days after the hurricance, preferring to wage a war against the National Football League over the “Take the Knee” demonstrations during the National Anthem. When he did speak, it was to try and claim credit for success, despite little sign of relief on the island.

Damn it, this is not a good news story. This is a ‘people are dying’ story. It’s a life-or-death story.

Supposedly managing the crisis as he played golf this weekend at his New Jersey club, Trump opened his assault on Saturday morning:

The Mayor of San Juan, who was very complimentary only a few days ago, has now been told by the Democrats that you must be nasty to Trump.

He continued, “Such poor leadership ability by the Mayor of San Juan, and others in Puerto Rico, who are not able to get their workers to help. They want everything to be done for them when it should be a community effort. 10,000 Federal workers now on Island doing a fantastic job.”

Trump then spent much of the day trying to portray a contest pitting valiant first responders and the military against Cruz and the media:

Despite the Fake News Media in conjunction with the Dems, an amazing job is being done in Puerto Rico. Great people!

Doing so, Trump tipped off his personal motive. He had hoped to visit the island on Tuesday to celebrate success, but is facing turmoil and political embarrassment.

So the President told Puerto Ricans that they should believe him rather than what they may be witnessing and enduring: “#FakeNews critics are working overtime, but we’re getting great marks from the people that truly matter!”

I will be in PR on Tues. to further ensure we continue doing everything possible to assist & support the people in their time of great need.

Mayor is a “Hater”

Trump was aided and abetted through the day by White House staff, as well as alt-right supporters.

The White House director of social media Dan Scavino, who may be crafting some of Trump’s tweets, came out in his own name with a denunciation of Cruz for endorsing Hillary Clinton in last year’s Presidential election:

.@realDonaldTrump hater, the Mayor of San Juan – is the perfect example of an opportunistic politician. Go ask PR Gov about responsiveness. pic.twitter.com/us3p78P9zK

And Trump was primed for his Twitter barrage by alt-right agitators like Mike Cernovich, a self-style “national security reporter” known for false conspiracy stories such as “Pizzagate”:

She is garbage, she is a murderer, she failed her people and her duties and belongs in prison! https://t.co/pUpa5zzfcI

Residents wait in a line of about 300 cars and trucks for gasoline — one of a series of photographs in The New York Times series, “One Day in the Life of Battered Puerto Rico“: 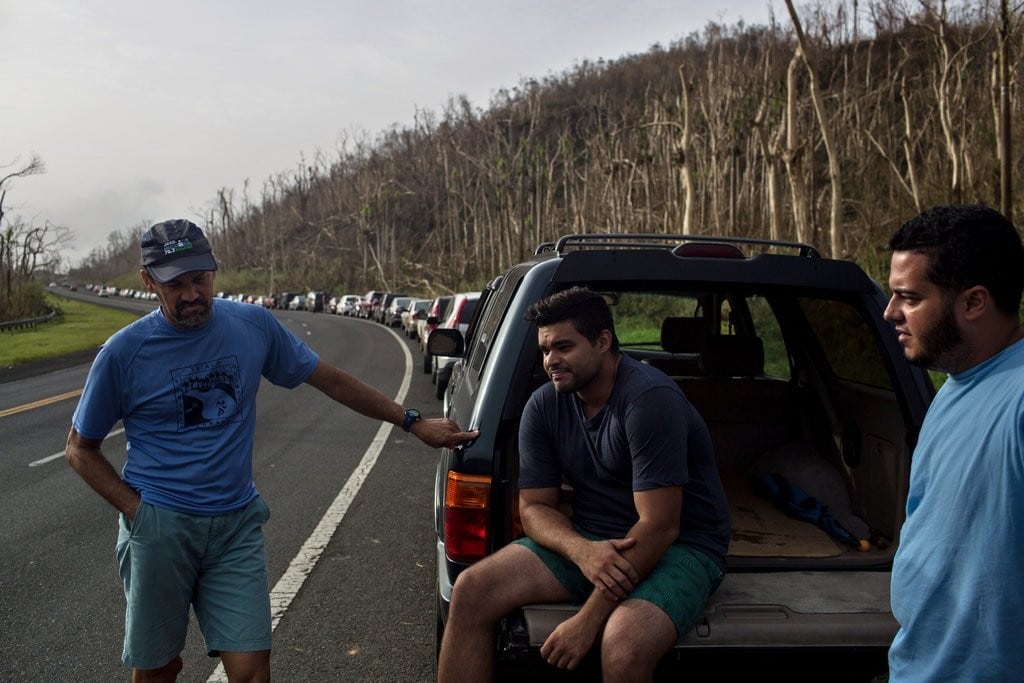 Cruz: We Will Not Be Distracted

Mayor Cruz said she would not be distracted by “small comments” as she said she was “asking for help” amd “wasn’t saying anything nasty about the President”. She pointed to remarks on Friday by Lt. Gen. Jeffrey Buchanan, leading the response effort, that he did not have enough troops and equipment:

I’m just a little mayor from the capital city of San Juan. This is a three-star general telling the world that right now he does not have the appropriate means and tools to take care of the situation.

Cruz was backed by a high-profile show of support, including from Russel L. Honoré, the retired lieutenant general who took over the response to Hurricane Katrina in 2005: “The mayor’s living on a cot, and I hope the president has a good day at golf.”

Acting Homeland Security Secretary Duke backed away from her “good news” remarks that stirred the confrontation. Arriving in Puerto Rico on Friday, she said the situation on the ground was “not satisfactory”

CBS News’s David Begnaud reports “I have to tell you the notion of people helping people is all we have seen on the island ever since we got here, in communities where they have waited seven or eight days for help to arrive.”

Amid Trump’s whipped-up drama of a confrontation with Cruz and the media, suffering continues on Puerto Rico.

The official death toll is 16, but the number could be far higher. One resident, with contacts in the government, said, “There’s a medical center down here, and everyone that was in the Intensive Care Unit, died. Everyone. That’s just one detail.”

The US Army said on Saturday that 55% of Puerto Rican have no drinking water, up from 44% last Tuesday.

Administration Threatens Rise in Healthcare Premiums for 130,000+ in Oklahoma

Amid allegations that it is trying to sabotage ObamaCare, the Trump Administration is putting more than 130,000 Oklahomas at risk of higher healthcare premiums.

The Health and Human Services Department would not sign a waiver to allow Oklahoma to enact a state-administered reinsurance program. With the expiry of the deadline, Oklahma’s HHS Department has been forced to withdraw the initiative.

Donald Trump has said that, if no GOP bill passes to replace ObamaCare, he would help ensure that the system collapses.

CHIP has reduced the uninsured rate among children to 5% from 14% since 1997, covering nine million children and pregnant women; however, legislators scheduled no vote to renew its funding before a September 30 deadline.

Agreement on renewal was reached in mid-September between Republican Senator Orrin Hatch and Democrat Ron Wyden, but then the GOP’s last-ditch attempt to pass the Graham-Cassidy bill, replacing the Affordable Care Act, intervened.