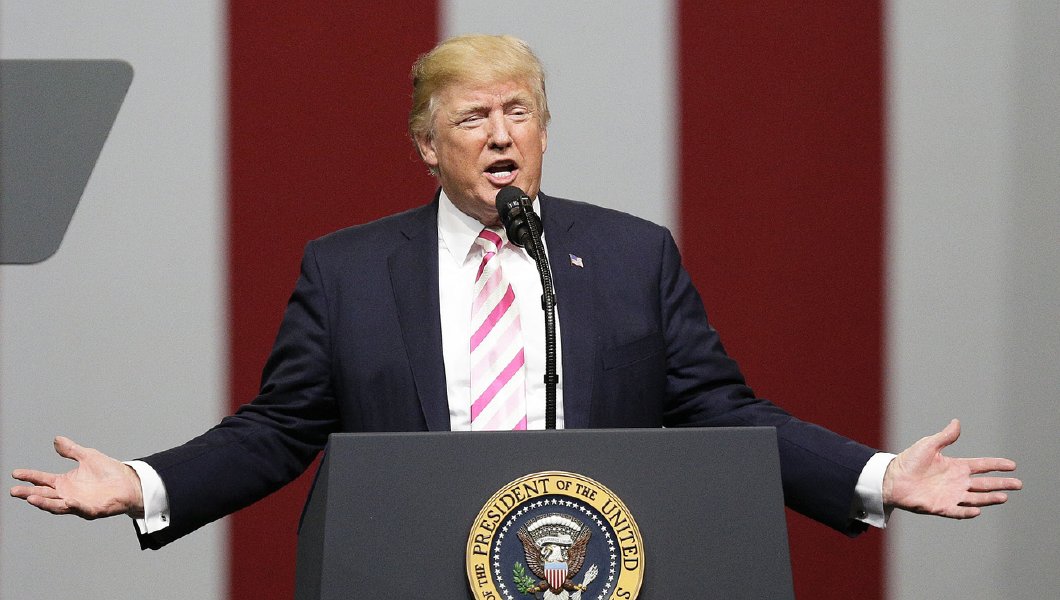 Developments on Day 247 of the Trump Administration:

Trump finished his Twitter day with another rhetorical challenge trying to demean North Korea’s regime and its leader Kim Jong-un:

Just heard Foreign Minister of North Korea speak at U.N. If he echoes thoughts of Little Rocket Man, they won't be around much longer!

Addressing the UN General Assembly, North Korean Foreign Minister Ri Yong Ho responded to Trump’s Tuesday speech in which he promised to “totally destroy” Pyongyang if it attacked the US and belittled Kim Jong-un as “Rocket Man”.

“None other than Trump himself is on a suicide mission,” Ri said. “In case innocent lives of the US are harmed because of this suicide attack, Trump will be held totally responsible.”

The dangerous reality [is] that the gambler who grew old using threats, frauds and all other schemes to acquire a patch of land holds the nuclear button. These are what constitute the gravest threat to the international peace and security today.

In another US response, American warplanes made their further journey north of Korea’s Demilitarized Zone this century.
B-1B Lancer bombers from Guam and F-15C Eagle fighter escorts from Okinawa, Japan flew in international airspace over waters east of North Korea.

Earlier in the day, Trump showed his anger with Republican senator McCain, who announced on Friday that he will not support the fourth and possibly final GOP attempt to repeal and replace ObamaCare:

John McCain never had any intention of voting for this Bill, which his Governor loves. He campaigned on Repeal & Replace. Let Arizona down!

With Rand Paul of Kentucky already saying that he will not back the Graham-Cassidy bill, the Republicans cannot afford any more defections from their 52-48 Senate majority. However, Susan Collins of Maine has indicated the she is leaning to No, and several other senators are also possible objectors.

After more attacks — “[Senate Minority Leader] Chuck Schumer sold John McCain a bill of goods” — Trump held out his hope: “I know Rand Paul and I think he may find a way to get there for the good of the Party!” He returned to McCain in the evening:

Democrats are laughingly saying that McCain had a "moment of courage." Tell that to the people of Arizona who were deceived. 116% increase!

But Trump’s highest-profile Twitter battle on Saturday was with LeBron James, one of the biggest stars in the National Basketball Association, after Trump snapped at fellow NBA standout Stephen Curry:

Going to the White House is considered a great honor for a championship team.Stephen Curry is hesitating,therefore invitation is withdrawn!

Curry said on Friday that he did not want to meet Trump, in the traditional reception of the NBA champions, because it would sent a message that “we won’t stand for” some of Trump’s past remarks: “This is my opportunity to voice that.”

James responded to Trump, in a message retweeted more than 573,000 times:

U bum @StephenCurry30 already said he ain't going! So therefore ain't no invite. Going to White House was a great honor until you showed up!

"It’s not about dividing. We as American people need to come together even stronger.” — @KingJames responds to @realDonaldTrump’s comments. pic.twitter.com/UHpzXpb42K

Trump stoked more responses from the sporting world over his Friday night speech in which he swung at National Football League Colin Kaepernick, who has refused to stand for the National Anthem because of political concerns, and questioned recent concerns about long-term brain injuries suffered by NFL players.

Trump encouraged NFL owners — seven of whom donated $1 million each to his 2016 campaign — to dismiss anyone who shared Kaepernick’s approach: “Get that son of a bitch off the field right now. Out! He’s fired.”

The NFL and our players are at our best when we help create a sense of unity in our country and our culture. There is no better example than the amazing response from our clubs and players to the terrible natural disasters we’ve experienced over the last month. Divisive comments like these demonstrate an unfortunate lack of respect for the NFL, our great game and all of our players, and a failure to understand the overwhelming force for good our clubs and players represent in our communities.

Roger Goodell of NFL just put out a statement trying to justify the total disrespect certain players show to our country.Tell them to stand!

A Republican National Committee account is funding Donald Trump’s attorneys in the Trump-Russia investigation, with donors including billionaire investor Charles Schwab, a property developer seeking US Government visas, and a Ukrainian-born American who has made billions of dollars doing business with Russian oligarchs.

The RNC, through an account typically used for its legal bills, paid more than $300,000 last month to help cover Mr. Trump’s private legal fees, according to filings with the Federal Election Commission.

The fund has also paid another nearly $200,000 to lawyers for the President’s eldest son, Donald Trump Jr., according to “a person familiar with the payments”.

In June, New York-based donor Lianbo Wang donated $329,500 to a joint fund between Mr. Trump’s campaign and the RNC. About $86,000 was diverted to the RNC’s legal fund in August.

Wang is a board member of a project to build the Thompson Education Center in upstate New York. The initial version of the project sought to draw Chinese investors through the federal EB-5 visa program, which offers permanent residency to aspiring immigrants who invest at least $500,000 in certain U.S. businesses that have been determined to create at least 10 jobs per investor.

Blavatnik amassed his fortune in Russia in the years following the collapse of the Soviet Union. He is a longtime business partner of Viktor Vekselberg, one of the richest men in Russia and closely tied to the Kremlin.

In 2013 Mr. Blavatnik earned billions when he, Vekselberg, and two other partners sold their stake in the oil company TNK-BP to Rosneft, a Kremlin-controlled oil company.

Vice President Mike Pence has opted not to have the campaign or the RNC pay for his private legal representation in the Russia inquiry.

GOP Healthcare Bill *Does” Strip Away Coverage of Pre-Existing Conditions

The Washington Post evaluates the assertion of both Donald Trump and the sponsors of the GOP’s latest effort to repeal and replace ObamaCare that the measure continues to provide coverage of pre-existing conditions.

The Post says of the Graham-Cassidy bill, introduced by Senators Lindsay Graham and Bill Cassidy, “Contrary to Cassidy’s claim that ‘the protection is absolutely the same’, it actually weakens it more than any previous proposal.”

I would not sign Graham-Cassidy if it did not include coverage of pre-existing conditions. It does! A great Bill. Repeal & Replace.

Depending on the state, the protection for preexisting conditions could be the same — or people with cancer or other serious illnesses could find themselves in a high-risk pool being charged extraordinarily high premiums….

The Cassidy-Graham plan offers a route that would all but ensure that premiums are much higher for people with preexisting conditions, if they can receive coverage for their condition in the first place.