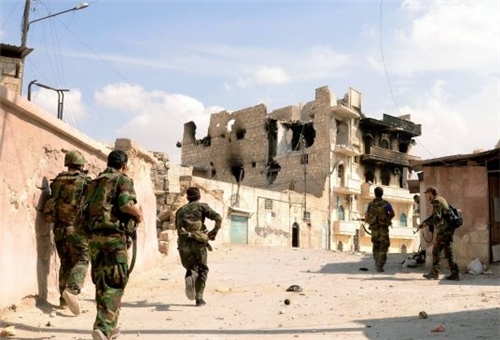 The Assad regime’s military and its allies have entered Deir ez-Zor Province, the last significant area of ISIS presence within Syria, with the provincial governor declaring that the forces will reach Deir ez-Zor city within 48 hours.

The pro-Assad offensive, supported by Russian airstrikes, has been capturing the last ISIS positions in eastern Hama Province, with the promise of continuing to the east. The ultimate goal has been breaking the Islamic State’s siege of more than three years on Deir ez-Zor city, which is divided between ISIS and regime forces.

On Sunday, the regime’s military declared that it had moved as close as 12 km (7.5 miles) from the city, occupying the al-Kharata oil field along the way.

Citing a “military source”, State news agency SANA said the pro-Assad forces were also clearing the last ISIS pocket in eastern Hama, with the capture of the town of Uqayribat and the surrounding area. The source claimed more than 120 Islamic State fighters were killed in the operation.

Iran Condemns US Blocking of ISIS Convoy Moving to East

In a twist of narrative, Iran — which has long proclaimed its fight alongside the Assad regime against the Islamic State — has criticized the US for blocking the movement of more than 600 ISIS fighters and family members to eastern Syria near the Iraq border.

A convoy of buses and ambulances began moving the ISIS group last Monday from southwestern Syria, after Hezbollah and Lebanese military operations cleared the Islamic State from both sides of the Syrian-Lebanese border. However, as the convoy reached eastern Hama Province, US warplanes cratered roads to prevent it from travelling farther to the town of al-Bukamal in Deir ez-Zor Province.

See Syria Daily, September 1: Has US Blocked Hezbollah-Regime Transfer of ISIS to East?

Iranian Foreign Ministry spokesman Bahram Qassemi claimed on Sunday that the US was trying to tarnish “the victory of the Lebanese government and the resistance movement”. He insisted that “the US move to lay a siege to women and children” was “illogical” because of America’s “history of cooperation with Daesh”.

Qassemi emphasized that the US was blockading women and children but did not refer to the ISIS fighters: “The aerial siege against women and children in non-military buses and the deaths of several pregnant women over the past two days may turn into a humanitarian disaster if continued.”