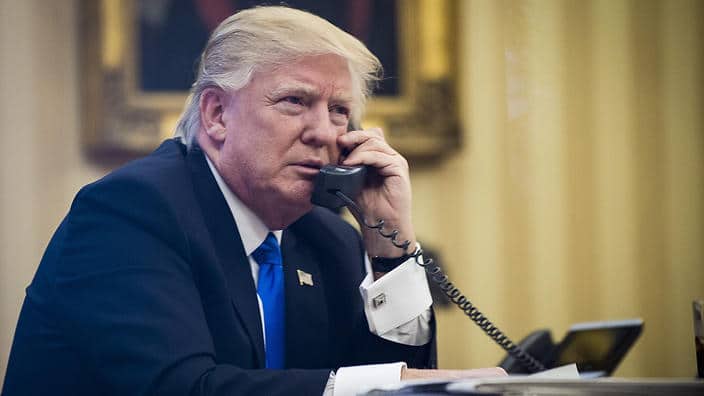 The fast-moving news cycle, including the revelation of the grand jury empanelled to take and consider evidence in the Trump-Russia inquiry, soon overtook the transcripts. The content has also been overshadowed by a debate over whether the documents should have been leaked to the media.

Still, there is a significance in the transcripts which is likely to resonate as the White House struggles for any domestic or foreign policy traction and the Trump-Russia investigation closes in on the President.

Here are the key lessons:

Peña Nieto: We find this completely unacceptable for Mexicans to pay for The Wall that you are thinking of building….

Believe it or not, this is the least important thing that we are talking about, but politically this might be the most important talk about….

Peña Nieto: Mr. President – let us stop talking about the wall. I have recognized the right of any government to protect its borders as it deems necessary and convenient. But my position has been and will continue to be very firm saying that Mexico cannot pay for that wall.

Trump: But you cannot say that to the press. The press is going to go with that and I cannot live with that….

Peña Nieto: Let us for now stop talking about the wall. Let us look for a creative way to solve this issue, for this to serve both are your government, my government, and both of our societies….

Trump: Okay, Enrique, that is fine and I think it is fair. I do not bring up the wall but when the press brings up the wall, I will say, “let us see how it is going – let us see how it is working out with Mexico.” Because from an economic issue, it is the least important thing we were talking about, but psychologically, it means something so let us just say “we will work it out.”

To summarize, when pressed by the Mexican President on one of his key campaign promises, Trump backed down. While the US President might maintain — “when the press brings [it] up” — that The Wall would proceed but he would no longer make the pledge that Mexico would pay. And The Wall is not that important anyway, Trump concedes, except for appearances.

In the wider conversation, Trump threatened to “tax the border”. But that proposal has never materialized, amid significant opposition within the Republican Party to any such initiative, as well as the effect on NAFTA.

If, within the space of one conversation, Peña Nieto could knock Trump off one of the central planks of his new Presidency, what did this indicate for The Donald when he encountered a Vladimir Putin or Xi Jinping?

Trump Is Weak and a Liar

Trump: I am going to say that I have no choice but to honor my predecessor’s deal [an Obama-Australia agreement on acceptance of refugees]. I think it is a horrible deal, a disgusting deal that I would have never made. It is an embarrassment to the United States of America and you can say it just the way I said it. I will say it just that way. As far as I am concerned that is enough Malcom [sic]. I have had it. I have been making these calls all day and this is the most unpleasant call all day. Putin was a pleasant call. This is ridiculous.

Turnbull: Do you want to talk about Syria and DPRK [North Korea]?

Trump: [inaudible] this is crazy.

Turnbull: Thank you for your commitment. It is very important to us.

Trump: It is important to you and it is embarrassing to me. It is an embarrassment to me, but at least I got you off the hook. So you put me back on the hook.

Soon after his call with Australia’s Turnbull, the media — fed by US officials — reported Trump’s anger during the exchange, culminating with him hanging up abruptly.

Trump insisted that the stories were part of the “Fake News” campaign against him. However, the transcripts are definitive in the presentation of his alpha-male contest with Turnbull. At one point, he declares, “I am the world’s greatest person that does not want to let people into the country.” Turnbull is undeterred, questioning Trump’s grasp of the numbers and of the agreement made with Obama.

Today the agreement still stands, and Trump has never made a public move against it.

Trump is Weak, A Liar, and A Fantasist

It is not clear why Trump seized upon New Hampshire as the example to give Peña Nieto of the Mexican drug menace. Like many other US states, New Hampshire is trying to cope with an increase in opioid addiction, but there is no evidence that it is an exceptional case — nor is there a direct chain of evidence leading back to the “southern border”.

The Granite State’s GOP governor, Democratic US Senators, and residents all fought back on Twitter after the transcript was revealed.

Oh, and Donald Trump did not win New Hampshire in the November election. Hillary Clinton did.

Trump is Weak, A Liar, and A Fantasist…But There’s Always Vlad

A quick flashback to the Trump encounter with Turnbull, “the most unpleasant call” of the day:

Putin was a pleasant call.