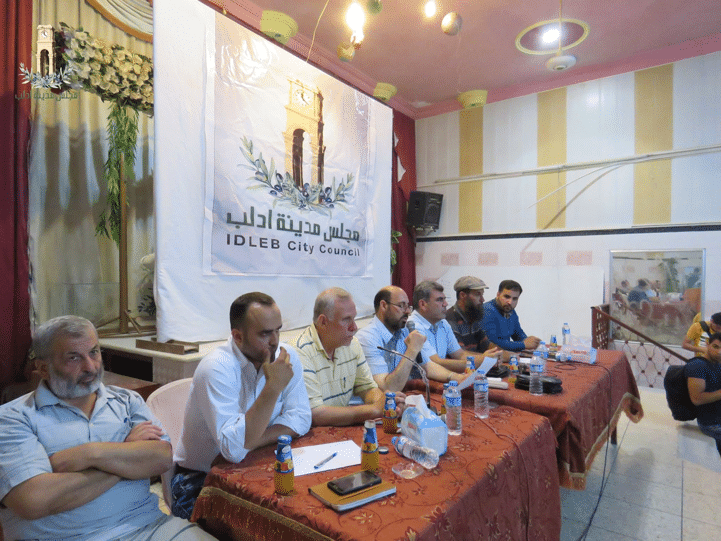 The jihadist bloc Hay’at Tahrir al-Sham has taken over the city council in Idlib in northwest Syria, the most populous opposition-held area.

HTS fighters moved into the council building on Monday and expelled employees, a week after civil authorities refused to hand over control.

“[They] came in and demanded that we surrender the office to them,” an employee in council executive offices told Syria Direct on Tuesday. “They told us that any employee wishing to work with them can remain. I left and no one stopped me.”

The bloc — led by the former Al Qa’eda affiliate Jabhat Fatah al-Sham — has claimed territory in parts of Idlib Province this summer, pushing back the Ahrar al-Sham faction. However, HTS has continued to face resistance from residents and many of the more than 150 local councils in Idlib Province, with demonstrations against any military presence.

Public services in Idlib Province, almost all of which was captured by rebels in 2015, have been run by the local councils, funded by the opposition Syrian National Coalition. HTS established a rival Civil Administration of Services earlier this summer for areas under its control.

City Council: “We Will Remain With the People”

The city council, whose members were elected in January, said on Facebook last week:

Rapid and successive decisions related to departments affiliated with the Idlib City Council are an attempt to subject them to its subordination.

To the people of Idlib, to the revolutionaries and to Syrians everywhere: The Idlib City Council will remain with you. It will not be dismissed and it will not resign.

Council Vice President Ayman Aswad said then, “Our work has not been impacted” by the HTS pressure, but “as for the future, I can’t say how things will look”.

Saleem al-Khadr, a member of Idlib’s Provincial Council, said yesterday, “We are currently trying to recover the city council.”

But he effectively admitted little hope of success, in the face of HTS’s arms, without support: “The only weapon we possess — and work on behalf of — is our legitimacy. We are elected and are recognized by nations abroad.”

The Free Syrian Army has denied claims by the US-led coalition of clashes between the FSA and US forces, working with Kurdish-led Syrian Democratic Forces, near Manbij in Aleppo Province.

The deputy commander-in-chief of the Liwa al-Shamal faction, Abu al-Faruq, said the Kurdish militia YPG — the leading group in the SDF — targeted civilians in a nearby village and then fired mortars and cannon on FSA positions.

The commander said the FSA did not respond.

A coalition spokesman, Col. Ryan Dillon, had told media, “Coalition forces have engaged in clashes against the Free Syrian Army on the outskirts of the city of Manbij after being targeted while patrolling near areas controlled by the latter.”

The SDF captured Manbij from the Islamic State in March. The US and Russia deployed forces on the outskirts of the city to prevent the Turkish-supported FSA — which had taken much of northern Aleppo Province since August 2016 — from advancing.