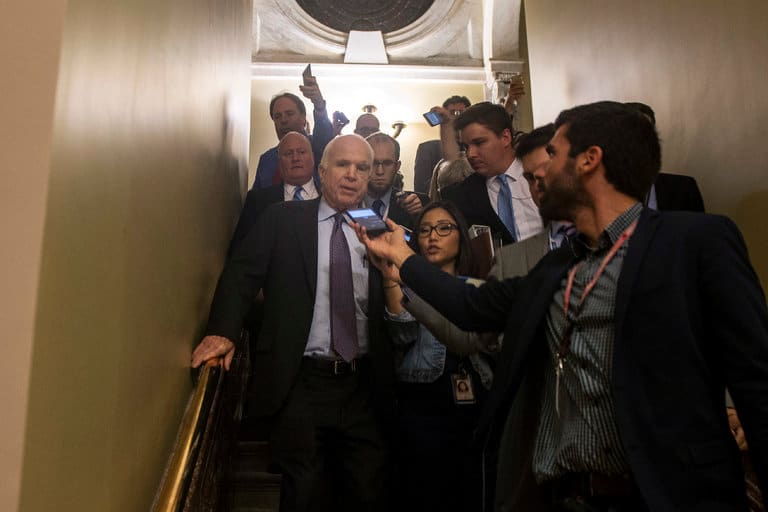 Developments on Day 189 of the Trump Administration:

The Senate delivers the third, possibly lethal blow to the plan of the White House and the GOP leadership to repeal and replace ObamaCare.

John McCain of Arizona, who returned from a diagnosis of brain cancer to participate in this week’s debates and votes, joined moderates Susan Collins of Maine and Lisa Murkowski of Alaska in opposition. That left the Republicans one vote short, at 49-51, from putting the decision in the hands of Vice President Mike Pence.

The vote early Friday was on a “skinny repeal” of ObamaCare, following rejections by significant margins of “repeal and replace” and “clean repeal” efforts.

Unveiled only hours before the vote, “skinny repeal” was a skeletal plan to at least get into negotiations with the House of Representatives, which passed a wider-ranging replacement of ObamaCare at the third attempt in early May. It still would have raised the number of uninsured Americans by 15 million next year and increased premiums by about 20%, according to the Congressional Budget Office.

The eight-page Health Care Freedom Act would have ended the requirement that most people have health coverage, under the individual mandate,, but it would not have put in place other incentives to obtain insurance. It would also have ended the requirement that large employers offer coverage to workers. A tax would have been delayed on medical devices and federal funds cut off for Planned Parenthood for one year while increasing federal grants to community health centers. Limits on contributions to tax-favored health savings accounts would have been raised.

The HCFA would have eased the way for states to waive federal requirements that health insurance plans provide consumers with a minimum set of benefits, like maternity care and prescription drugs. It would have eliminated ObamaCare funds for many prevention and public health programs.

How the Vote Was Lost

McCain’s vote allowed him to be cast as the killer of what may be a final GOP effort, sparing other moderates who have been threatened by the White House with challenges to their political future and to support for their states.

Murkowski, who voted No on the previous two measures this week, has reportedly been warned by Interior Secretary Ryan Zinke of consequences for Alaska because of her position. Donald Trump has also singled her out in his Twitter attacks.

Trump — who earlier in the week had hailed McCain for returning to the Senate to ensure that the healthcare bills proceeded to floor votes — was in a far different mood on Twitter early Friday:

3 Republicans and 48 Democrats let the American people down. As I said from the beginning, let ObamaCare implode, then deal. Watch!

Even if McCain had not ensured the demise of “skinny repeal”, the bill would have faced further trouble from some GOP conservatives, who demanded assurances from House leaders that the measures would not be enacted. While voting Yes, conservatives like Lindsey Graham of South Carolina and Ron Johnson of Wisconsin demanded a full demolition of ObamaCare.

Graham called the HCFA a “disaster” and a “fraud”, while Mark Meadows of North Carolina, the chairman of the hard-line Freedom Caucus, said it is a “nonstarter” to send Donald Trump a bill that has “gotten so skinny that it doesn’t resemble a repeal”.

In a statement after the vote, McCain indicated he was closer to the conservatives than to the moderates Collins and Murkowski who paved the way for the rejection:

While the amendment would have repealed some of Obamacare’s most burdensome regulations, it offered no replacement to actually reform our health care system and deliver affordable, quality health care to our citizens.

However, he also challenged the Trump Administration and GOP leadership, such as Senate Majority Mitch McConnell, for pushing the bill without any effort at bipartisan support, including public hearings and bill-drafting sessions:

I’ve stated time and time again that one of the major failures of Obamacare was that it was rammed through Congress by Democrats on a strict-party line basis without a single Republican vote.