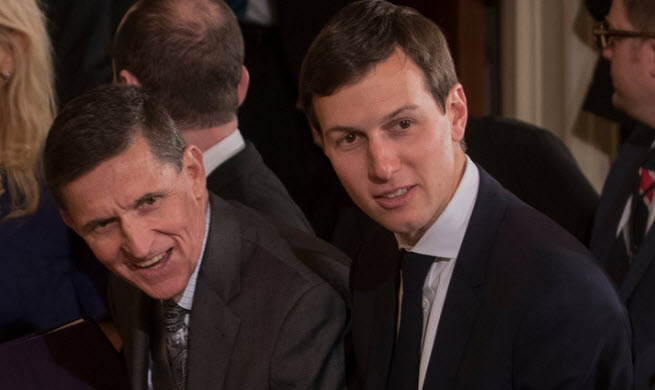 Trump’s son-in-law will meet committees on Monday and Tuesday, but without being under oath

Developments on Day 185 of the Trump Administration:

Kushner Faces Committees — But Not Under Oath

Donald Trump’s son-in-law and White House advisor Jared Kushner will be questioned by the Senate Intelligence Committee on Monday in a closed-door session.

Kushner will then face the House Intelligence Committee on Tuesday. Easing the formality of the process, he will be under oath as he deals with questions about his financial affairs, failure to disclose information, and contacts with Russian officials during Moscow’s interference in the 2016 US election.

Trump campaign chairman Paul Manafort and Donald Trump Jr. — who arranged a meeting including Kushner and Trump campaign chairman Paul Manafort with three Kremlin-linked envoys in June 2016 to discuss Moscow’s offer of material damaging Democratic nominee Hillary Clinton — were scheduled for a closed session with the Senate Intelligence Committee this week, but this has been delayed indefinitely amid negotiations with attorneys for documents.

The permission for Kushner to speak without an oath allows him to avoid invocation of the 5th Amendment against self-incrimination, although lawyers said he will have to still consider “the potential criminal fallout of talking”.

The committees are likely to share the conversations with Special Counsel Robert Mueller, appointed in May to examine the possible connections between Trump associates and Russia during the 2016 election.

In addition to the June 2016 meeting, Kushner spoke with Russian officials later in the year, including December encounters with Russian Ambassador Sergei Kislyak — who also met Trump advisors such as Jeff Sessions, now Attorney General, and Michael Flynn, later dismissed as National Security Advisor — and with the Kremlin-connected director of Russia’s Vnesheconbank. Speculation has arisen over whether the latter meeting was connecting with Kushner’s troubled skyscraper project on 5th Avenue in New York, requiring hundreds of millions of dollars in loans.

Kushner has fed that speculation with failure to disclose records of more than 100 meetings with representatives of 20 foreign countries and of more than 70 assets. He has filed several revisions of required Government filings, each one adding some previously-undisclosed encounters and holdings.

On Sunday it was revealed that Kushner had $1 billion of outstanding loans on his projects.

Trump Lashes Out at Republicans: “Do Very Little to Protect Their President”

Frustrated over both the Trump-Russia investigation and his failure to pass any major legislation, Donald Trump lashes out at Republicans on Twitter:

It's very sad that Republicans, even some that were carried over the line on my back, do very little to protect their President.

Trump launched a Twitter offensive on Saturday trying to push back the inquiry by diverting attention to Hillary Clinton, only to draw attention to reports that he has asked for consideration of pre-emptive pardons for himself, his family, and his aides.

See TrumpWatch, Day 184: Trump — I Have “Complete Power to Pardon” Myself, My Family, & My Aides

Having turned against Attorney General Jeff Sessions on Wednesday for being “extremely unfair” in recusing himself from the Trump-Russia investigation, Trump blasted Republican legislators yesterday over the near-death GOP healthcare bill:

If Republicans don't Repeal and Replace the disastrous ObamaCare, the repercussions will be far greater than any of them understand!

After months of effort, Senate Majority Leader Mitch McConnell acknowledged defeat last week because of continued opposition from several conservative and moderate GOP senators; however, Trump has demanded that consideration of a replacement for ObamaCare be pursued throughout August.

The White House indicates that Donald Trump will back down on his resistance to sanctions against Russia, accepting bipartisan legislation restricting his authority to lift them.

Congressional leaders said Saturday that they had reached agreement on punishment Russia over its interference in the 2016 US election. The measure, which passed the Senate on a 98-2 vote last month, prohibits Trump from acting without the approval of legislators.

The White House had appealed for Trump’s ongoing flexibility over his approach to Russia, but faced scepticism given the expanding Trump-Russia investigation and the President’s unusual conduct of meetings with Russian counterpart Vladimir Putin on June 7 at the G20 summit.

The administration is supportive of being tough on Russia, particularly in putting these sanctions in place. The original piece of legislation was poorly written, but we were able to work with the House and Senate, and the administration is happy with the ability to do that and make those changes that were necessary and we support where the legislation is now.

However, new White House Communications Director Anthony Scaramucci kept the door open for a Trump veto: “He hasn’t made the decision yet to sign that bill one way or the other.”

Meanwhile, Scaramucci reaffirmed that Trump — defying the unanimous conclusion of the US intelligence community –does not accept that Russia interfered in the election.

Colin Kahl, a Georgetown University professor and former Assistant Secretary of Defense, points out that the Trump-Scaramucci line — that if the Russians interfered, they would be so capable that no one would have discovered the intervention — is the same that Vladimir Putin gave Trump at the G20 summit:

When Trump & Mooch say it wasn't Russia because they wouldn't have been caught, they're literally using Putin's TPs. https://t.co/TSHH8TMpL8 pic.twitter.com/iwgKI8KpsK