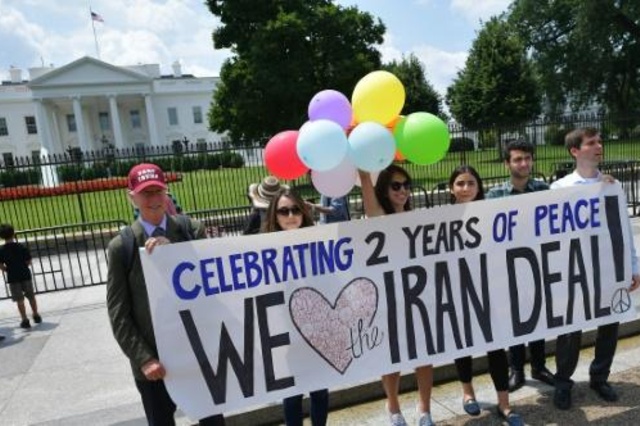 Setting aside any idea of withdrawing from the July 2015 nuclear deal, the Trump Administration has recertified Iran’s compliance with the agreement.

For the second time since taking office in January, Donald Trump signed the certification on what he labelled “the worst deal ever” during his Presidential campaign.

But Administration officials told reporters that they are preparing new sanctions, accompanying many US restrictions that have remained in place despite implementation of the deal from January 2016.

A “senior administration official” said Iran was judged to be adhering to the deal, under which Tehran gave up all of its 20% enriched uranium and almost all of its 3.5% stock and suspended research and development of new centrifuges. But he accused the Islamic Republic of pursuing ballistic missile development and proliferation, supporting “terrorism”, conspiring in atrocities committed in Syria, and threatening movement in the Persian Gulf:

The President and the Secretary of State judge that these Iranian activities severely undermine the intent of the JCPOA [Joint Comprehensive Plan of Action], which was to contribute to regional and international peace and security. As a result the President, the Secretary of State, and the entire administration judge that Iran is unquestionably in default of the spirit of the JCPOA.

Soon after taking office, Trump and his advisors made noises about withdrawal from the deal. But the International Atomic Energy Agency has verified Iran’s compliance with the terms, and any US action would risk a break from the other powers [UK, France, Germany, China, and Russia] who negotiated the JCPOA.

“We’re in a period where we’re going to be working with our allies to explore options for addressing the JCPOA’s flaws, which there are many,” the senior administration official said on Monday.

Ongoing US restrictions have limited essential trade and investment for Iran’s economic recovery, particularly by European firms. The sanctions have added to tensions between the Rouhani Government, which is staking its success on economic progress, and foes like the Revolutionary Guards.

Earlier this month the Government announced a breakthrough with a $4.8 billion contract with France’s Total for oilfield development, but Oil Minister Bijan Zanganeh says $200 billion is required for projects.

White House officials put out the story of a heated discussion before the renewed certification, required by Congress every 90 days, was issued to meet a Monday night deadline.

At an hour-long meeting last Wednesday, all of Trump’s major security advisers — Secretary of State Rex Tillerson;
Defense Secretary Jim Mattis; National Security Advisor H. R. McMaster; and the Chairman of the Joint Chief of Staff, General Joseph Dunford — recommended recertifcation despite Trump spending “55 minutes of the meeting telling them he did not want to”, according to an official.

Trump opposed recertification in April but agreed with the condition of a new strategy to confront Iran, the official said. Last week, advisors said they needed more time.

When Trump returned on Monday from a trip to Europe and a weekend at his New Jersey golf resort, he was told of the new approach. Trump was resistant, including in a meeting with Tillerson, and a background briefing to announce the decision was postponed. Agreement finally came after a meeting in the Oval Office.

“The president has made very clear that he thought this was a bad deal — a bad deal for the United States,” White House Press Secretary Sean Spicer said.

Iran’s Zarif: We Can Always Withdraw

Iran’s Foreign Minister Mohammad Javad Zarif, the lead negotiator for the 2015 agreement, has talked tough about any US detachment or imposition of new sanctions. He told the National Interest, in an interview published Monday, “If it comes to a major violation, or what in the terms of the nuclear deal is called significant nonperformance, then Iran has other options available, including withdrawing from the deal.”

He continued, “We wanted that agreement to be the foundation and not the ceiling. But in order for that to serve as a solid foundation, we want to make sure that the obligations by all sides have been fully and faithfully implemented.”

Zarif reinforced the call on Monday with an appearance at New York’s Council on Foreign Relations.

The Iranian military tried a stronger threat, warning the US against any further blacklisting of the Revolutionary Guards as a “foreign terrorist organization”.

“Lumping the Guards with terrorist groups and imposing similar sanctions is a big risk for the Americans, their bases and their forces in the region,” the Iranian Chief of Staff, Major General Mohammad Baqeri, said Monday.

Last month, the US Senate passed a bill in which it called on the State Department to designate the Guards. The measure is now in the House of Representatives.