Iran Daily: Tehran — We Stand with Russia Inside Syria Against the US 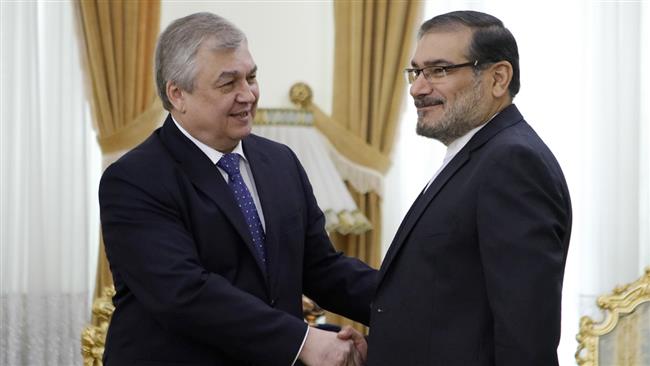 Iran’s regime has proclaims that, through its intervention in Syria’s conflict, it is standing with Russia against the US.

Ali Shamkhani, the Secretary of the Supreme National Security Council, hailed Russian-Iranian on Tuesday, “We believe that such relations are underway in a strategic form, particularly since Russia’s serious and effective involvement in the fight against terrorism started in Syria.”

Russia and Iran have been the essential political, economic, and military backers of the Assad regime since the Syrian uprising began in March 2011. The intervention has escalated with Iranian-led foreign militias taking over the main ground operations, while Russia carried out thousands of airstrikes since September 2015.

Meanwhile, Russia — having joined the US in a supposed political process after the Assad regime’s sarin attacks near Damascus in August 2013 — put aside Washington in summer 2016, working instead with Turkey and Iran on their preferred vision of Syrian arrangements, including the continued stay of Bashar al-Assad in power.

On Tuesday, after the latest talks between the three powers in Astana, Russia said it might deploy forces within two to three weeks in “buffer zones”.

Shamkhani spoke by phone with the Secretary of Russia’s Security Council, Nikolai Patrushev, on Tuesday morning. He then used the developments to position Iran against its regional rival, Saudi Arabia. He said that arms sales were only a small part of cooperation between the Islamic Republic and Russia, contrasting this with the recent announcement of $110 billion in US weapons and aircraft to Riyadh: “Contrary to certain countries in the region which merely purchase and stockpile US arms, Iran, itself, chooses the type of weapons it requires.”

Shamkhani emphasized that a “coalition” of Iran, Russia, Syria, Lebanon’s Hezbollah, and Iraq was not “short-lived”: “The most important issue is that there is a common analysis of the future of regional developments, the pervasiveness of the danger of terrorist groups and the negative role of the US, and its fake alliance in the region.”