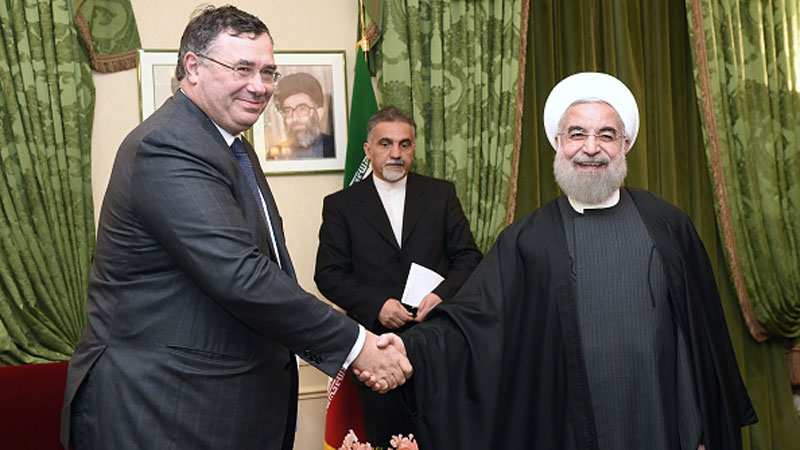 Iran is hailing the breakthrough of a multi-billion-dollar gas deal with French energy giant Total.

On Monday the National Iranian Oil Company and Total signed the contract, the first by a European firm in more than a decade, to develop the South Pars gas field, the world’s largest.

Total said the project will have a production capacity of 2 billion cubic feet per day, equivalent to 400,000 barrels of oil including condensate. The French company said the gas will supply the Iranian domestic market from 2021.

It estimated that the first phase of the South Pars development will cost about $2 billion.

Iranian President Hassan Rouhani said as he received Total’s chairman Patrick Pouyanne that the deal will provide for the “transfer of technological, scientific, and managerial experience” between Iran and France: “Signing and implementing this contract will be a positive step toward further expansion of economic and technological cooperation between the two countries.”

The Rouhani Government has been seeking the benefits of the July 2015 nuclear deal with trade and investment deals to spur Iranian recovery. However, links with European firms have been limited because of concerns over ongoing US sanctions, with the prospect of expansion under the Trump Administration.

Total and other European energy firms signed memoranda of understanding with Iran months ago to pursue deals, but Monday’s is the first move to a confirmed project. Cooperation over oilfields is still hindered by Iran’s internal disputes, as well as the US restrictions, over a proposed Iran Petroleum Contract.

Pouyanne supported Rouhani’s optimism on MOnday, saying that Total has decided to boost long-term cooperation with Iran in gas, oil, and petrochemicals.