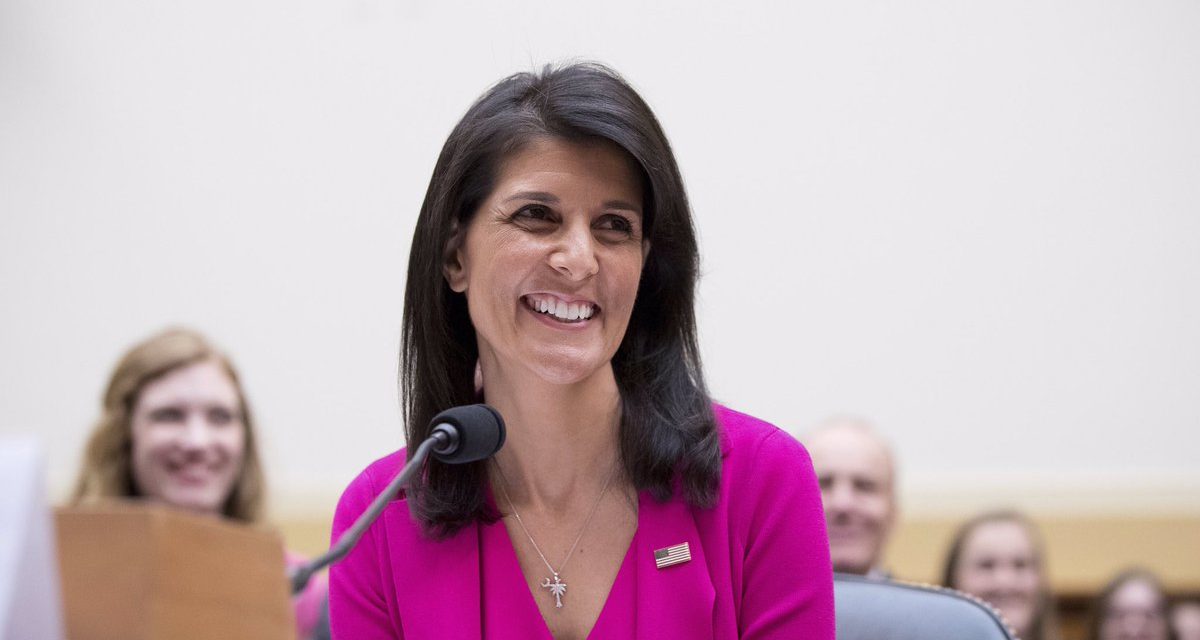 Developments on Day 160 of the Trump Administration:

Trump Administration: “We’re Only Getting Started” with UN Cuts

The Trump Administration gives a loud cheer for its cuts in support for UN peacekeeping operations, with Ambassador Nikki Haley hailing the move in a press statement and on Twitter.

"Just 5 months into our time here, we've cut over half a billion $$$ from the UN peacekeeping budget & we’re only getting started.” pic.twitter.com/LA7IKqupff

The press statement amplified, “Following a US-led effort, the UN budget committee significantly reduced the peacekeeping budget by over half a billion dollars, forcing the UN to work smarter and more efficiently.”

It then pointed to the overriding priority for the Trump Administration in Haley’s remark, “We have an obligation to show value to the American people in the use of their taxpayer dollars.”

Btw, I thought this might be a joke / hack at first. But there's a press release to go with it. pic.twitter.com/0CkFIotvPi

The reduction in the budget $7.9 billion to $7.3 billion came as UN Secretary-General Antonio Guterres spent a second day lobbying the Administration and legislators in Washington.

Guterres met Secretary of State Rex Tillerson on Wednesday after seeing Congressional representatives such as Speaker of the House.

The Secretary-General favors reform of UN administration and processes, but said the proposed $1 billion cut in UN funding by the Trump Administration would make work “simply impossible”.

Haley has aimed at the UN’s peacekeeping operations ever since she was appointed as Ambassador. In March, she gave the Security Council counterparts an ultimatum to slash 1,500 troops from the UN’s largest mission, in the Democratic Republic of the Congo, or the US would not support the extension of the mandate of the 17,000-member force.

With other countries warning that the move imperiled an intervention that had reduced the death toll in a civil war in which millions may have died since 1998, Haley backed down and only 370 troops were cut.

Administration Clamps Down on Visa Requirements Under “Muslim Ban”

Seizing the opening given to it by a temporary Supreme Court ruling, the Trump Administration implements its “Muslim Ban” through new criteria for all refugees and for visa applicants from six mainly-Muslim nations.

The criteria seize the Supreme Court’s standard of a “bona fide relationship” to require that any refugee or applicant from Iran, Sudan, Somalia, Yemen, Libya, or syria have a “close” family or business tie to the US.

Visas that have already been approved will not be revoked, but instructions by the State Department say that, for a family-related visa, there must be a relationship with a parent, spouse, child, adult son or daughter, son-in-law, daughter-in-law, or sibling already in the US. Grandparents, grandchildren, aunts, uncles, nieces, nephews, cousins, brothers-in-law and sisters-in-law, fiancees, or other family members are not considered to be close relationships.

The State Department said a business or professional relationship must be “formal, documented and formed in the ordinary course rather than for the purpose of evading” the ban. Journalists, students, workers or lecturers who have valid invitations or employment contracts in the US will be exempt.

The guidance will be in place until the Supreme Court holds hearings and issues a final decision in October.

Omar Jadwat of the American Civil Liberties Union cautioned, “Initial reports suggest that the government may try to unilaterally expand the scope of the ban – for example, by arbitrarily refusing to treat certain categories of familial relationships as ‘bona fide’. These reports are deeply concerning. We are watching for official word.”

Within an hour of Comey’s testimony before the Senate Intelligence Committee on June 8 — in which he described Trump’s demands for personal loyalty and his request for the halt to the investigation of former National Security Advisor Michael Flynn over contacts with Russian officials — Kasowitz said he would act over the fired FBI director “unilaterally and surreptitiously [making] unauthorized disclosures to the press of privileged communications with the President”.

Trump has a history of making legal threats and not following through, including against The New York Times over an article about his sexual harassment of women, against the women who said he accosted them, and against Republican primary opponent Ted Cruz “for not being a natural born citizen”.

Asked on Wednesday, “Are undocumented people more likely or less likely to commit crimes?”, Homan replied, “Did I say aliens commit more crimes than US citizens? I didn’t say that.”

Trump has repeatedly tried to justify a crackdown on undocumented immigrants by portraying them as criminals, drug dealers, and rapists.

The Trump Administration retracts a policy protecting more than half the nation’s streams from pollution.

The 2015 regulation tried to establish waterways are covered under the Clean Water Act. In February, Donald Trump issued an executive order instructing the Environmental Protection Agency and the US Army Corps of Engineers to rescind or revise the rule.

In a statement, the agencies announced withdrawal followed by a broader review of which waters should fall under federal jurisdiction.

“We are taking significant action to return power to the states and provide regulatory certainty to our nation’s farmers and businesses,” EPA Administrator Scott Pruitt said.

Environmental groups say the step will remove drinking water safeguards for one in three Americans and jeopardize thousands of streams that flow into larger rivers and lakes, as well as wetlands that filter pollutants and soak up floodwaters.

The EPA and the Army Corps said dismantling the Obama rule would not change existing practices because the measure has been stayed by the 6th Circuit U.S. Court of Appeals in response to opponents’ lawsuits.

Trump spent about two hours at a $35,000-per-plate donor event at the Trump International Hotel in Washington. About 300 people were expected to attend.

Trump blocked any press attendance, despite a White House announcement earlier in the day that a pool would be allowed.