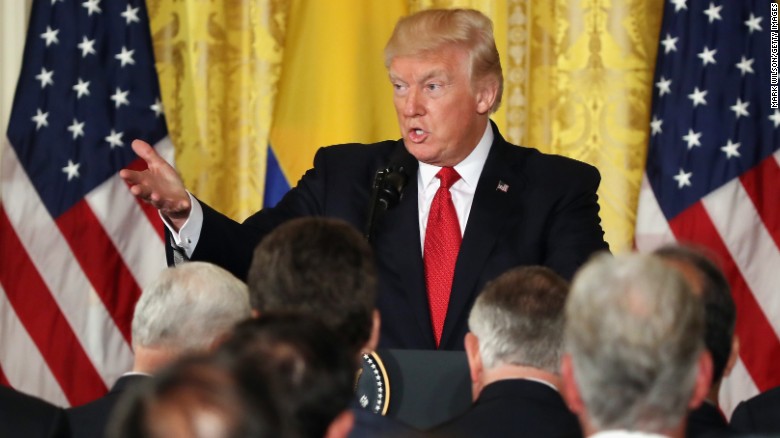 Trump: “No politician in history — and I say this with great surety — has been treated worse or more unfairly.”

Developments on Day 119 of the Trump Presidency:

Donald Trump has left on his first overseas trip as US President, leaving behind mounting problems over possible links with Russian officials.

Trump is flying to Saudi Arabia, Israel, and European stops including Rome in a trip billed as one to the centers of the world’s three largest religions. But headlines are still dominated by the latest in the Trump-Russia affair, which is now threatening the President with claims of obstruction of justice.

A US official summarized the situation, “It’s kind of do-or-die,” as Trump set off on Friday.

The White House had said it was taking a new, muted approach to the latest developments. The week started with the revelation that Trump had disclosed classified intelligence on May 9 to the visiting Russian Foreign Minister and Russian Ambassador. Then former FBI Director James Comey, fired a week earlier by Trump, revealed through associates that the President had asked him to drop the investigation of former National Security Advisor Michael Flynn over his contacts with the same Russian Ambassador, Sergei Kislyak, and other possible links with Moscow. On Wednesday, the Justice Department bypassed the White House to appoint a special counsel, Comey’s predecessor Robert Mueller, for the Trump-Russia investigation.

Trump undid his staff’s strategy and put fuel on the fire with a pair of tweets — the first of which was later deleted because of a spelling error, “With all of the illegal acts that took place in the Clinton campaign & Obama Administration, there was never a special councel [sic] appointed!”

This is the single greatest witch hunt of a politician in American history!

Despite the reaction on Twitter and the unease of his staff, Trump reinforced the message throughout the day in public appearances. He turned a commencement speech at the Coast Guard Academy into a diatribe against his persecution:

Then, at the White House alongside Colombian President Juan Manuel Santos, he said of the Justice Department’s appointment of special counsel Mueller:

I respect the move. But the entire thing has been a witch hunt.

And there is no collusion between, certainly, myself and my campaign — but I can always speak for myself — and the Russians. Zero.

Even before Trump’s appearance with Santos, his statements were running into further difficulty. Deputy Attorney General Rod Rosenstein, outlining to senators the decision to appoint Mueller, undermined the White House explanation for FBI Director Comey’s dismissal.

The Administration initially said Comey’s firing had nothing to do with the Trump-Russia investigation. They used a lengthy Rosenstein memorandum to say it was based on the FBI director’s approach to the inquiry into Hillary Clinton’s e-mails.

But Rosenstein told the senators that he was certain that Trump was going to dismiss Comey, even before he wrote the memo. That reinforces multiple reports, from former and current US officials, that Trump had returned from a weekend at his New Jersey golf complex determined to fire the FBI director — a version later endorsed by the President’s blunt declaration that he was unhappy with Comey over the Russia issue.

“Director Comey was very unpopular with most people,” Mr. Trump said on Thursday. “When I made that decision, I actually thought that it would be a bipartisan decision. Because you look at all of the people on the Democratic side, not only the Republican side, that were saying such terrible things about Director Comey.”

Garrett Graff of Politico explains why the White House should be worried about the expansion of the Trump-Russia investigation under special counsel Robert Mueller:

Donald Trump, as it turns out, has stumbled into taking on two experienced Washington players on their home turf—in skirmishes that will play out in public Capitol Hill hearings with Comey even as Mueller slogs along with what is likely to be a quiet, tenacious and by-the-book investigation into the heart of the Trump campaign’s relationship with Russia.

Massimo Calabresi of Time documents how the Russian influence operation in the 2016 US Presidential election expanded into a concerted assault on the campaign of Hillary Clinton, including the promotion of Donald Trump:

As they scrambled to contain the damage from the hack and regain control of any compromised devices, the spy hunters realized they faced a new kind of threat. In 2016, Russia had used thousands of covert human agents and robot computer programs to spread disinformation referencing the stolen campaign emails of Hillary Clinton, amplifying their effect. Now counterintelligence officials wondered: What chaos could Moscow unleash with thousands of Twitter handles that spoke in real time with the authority of the armed forces of the United States? At any given moment, perhaps during a natural disaster or a terrorist attack, Pentagon Twitter accounts might send out false information. As each tweet corroborated another, and covert Russian agents amplified the messages even further afield, the result could be panic and confusion.

“Not many people give much weight to anything he says,” said a US diplomat in the Middle East, speaking on condition of anonymity for fear of losing his job. “The haphazard way in which he’s operating suggests that there’s no real follow-through to his policy statements. All these scandals suggest the state is not operating the way he wants it to operate.”

In addition, the diplomat said, any damage he could inflict might be somewhat limited “if people assume he’s a buffoon and he’s not to be taken seriously.”

Mr. Kushner’s personal intervention in the arms sale is further evidence of the Trump White House’s readiness to dispense with custom in favor of informal, hands-on deal making. It also offers a window into how the administration hopes to change America’s position in the Middle East, emphasizing hard power and haggling over traditional diplomacy.