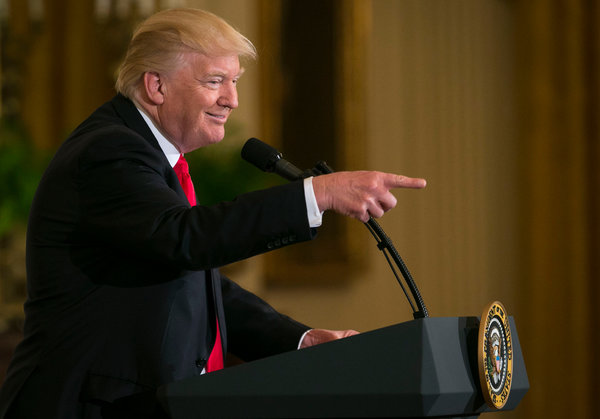 Trump: “James Comey better hope that there are no ‘tapes’ of our conversations before he starts leaking to the press!”

Developments on Day 113 of the Trump Administration:

Donald Trump continues to stoke controversy and possible crisis over his dismissal of James Comey amid the Trump-Russia inquiry, threatening the FBI Director with the revelation of “tapes” of their conversations.

Trump set off a day of heated discussion with a Friday morning tweet:

James Comey better hope that there are no "tapes" of our conversations before he starts leaking to the press!

Trump’s threat followed the claim on Thursday, two days after the President’s sudden firing of Comey, that he had asked the FBI Director for a pledge of loyalty at a White House dinner. The encounter, recounted by associates ofComey, came on January 27 — three days after an FBI interview of National Security Advisor Michael Flynn and a day after Acting Attorney General Sally Yates said Flynn’s false statements might expose the Trump Administration to Russian blackmail.

Trump’s reported summoning of Comey, as well as two phone calls, raises questions of possible obstruction of justice by the President during the investigation of links between Trump’s associates and Russian officials. The legal issue was elevated on Friday by Trump’s reference to possible secret taping of his visitors, a practice which contributed to the downfall of President Richard Nixon in 1974 during the Watergate scandal.

Pressed by reporters whether Trump had a secret recording system, White House press spokesman Sean Spicer repeatedly said, “The President has nothing further to add on that.”

Trump also refused clarification in an interview with Fox News: “That I can’t talk about. I won’t talk about it. All I want is for Comey to be honest.”

Trump’s associates and former employees have long said that he taped some of his own phone calls and meetings in Trump Tower. During the campaign, Trump’s aides told reporters that they feared their offices were bugged and that they were careful about what they said.

Later in the day, Comey said he would not accept an invitation from the Senate Intelligence Committee to testify in closed session next Tuesday. “A close associate” of Comey said the former FBI director is willing to testify, but wants it to be in public.

Another source “familiar with the matter” said Comey is “not worried about any tapes”. NBC’s Ken Dilanian added from another source:

A source close to Comey told me this morning: “He hopes there are tapes. That would be perfect.”

Without admitting any attempt at disinformation, Trump effectively admitted in his tweets that the White House — unprepared for the President’s sudden decision on Tuesday — had put out a false story over Comey’s firing when it said that Deputy Attorney General Rod Rosenstein had presented the idea to Trump.

The President said in a Thursday interview that the decision was solely his and he would have acted “without any recommendation”. He followed up yesterday:

As a very active President with lots of things happening, it is not possible for my surrogates to stand at podium with perfect accuracy!….

…Maybe the best thing to do would be to cancel all future "press briefings" and hand out written responses for the sake of accuracy???

Trump again raised the prospect of abandoning the White House press briefing in his interview with Fox News: “Unless I have them every two weeks and I do them myself, we don’t have them. I think it’s a good idea.”

Office of Government Ethics’ Twitter Message to Trump Over Loyalty

The Office of Government Ethics used Twitter to respond to reports of Trump’s demand in late January for loyalty from FBI Director Comey:

Leading Senators of both parties reject the White House’s continued repetition of the misleading line that legislators and senior officials have said there was “no collusion” between the Trump campaign and Russian officials.

But Grassley’s spokesman Taylor Foy firmly rejected the claim, “Senator Grassley has not spoken to President Trump about what he has learned in briefings related to investigations into Russian interference in our elections, and he has never referred to the notion of collusion as a ‘hoax’.”

The spokesman for the leading Democrat on the Judiciary Committee, Dianne Feinstein, made a similar denial, as did the offices of Richard Burr and Mark Warner, the GOP chairman and Democratic ranking member of the Senate Intelligence Committee.

Spicer also continued to misrepresent that former Director of National Intelligence James Clapper had conclusively said there was no collusion.

In fact, Clapper said in January that he had not seen evidence of collusion, but added that this was solely on the information he had given. He clarified earlier this week that, as DNI, he would not have been given any material or analysis from the ongoing FBI investigation.

Scientists Resign from EPA Panel After Dismissal of Colleagues

Two members of an Environmental Protection Agency science panel resign in protest after the agency dismissed other scientists earlier this month.

Carlos Martin and Peter Meyer said in a Friday letter that they would leave the Board of Scientific Counselors’ Sustainable and Healthy Communities subcommittee, after the EPA decision not to renew two other scientists’ positions:

The effective removal of our subcommittee’s co-chairs suggests that our collective knowledge is not valued by the current EPA administrators.

Like so many of our colleagues and the broader research community, we have deep concerns about the leadership at EPA and its continued obfuscation of scientific evidence and the research enterprise.

The office of EPA head Scott Pruitt said last week that it will renew the positions of at least five academic members of its scientific review board, as it considers replacing them with representatives from industries who are subject to the agency’s regulations.

An EPA spokesperson said Friday that the agency receives “hundreds” of nominations for positions on its science advisory boards, and that the dismissed members are able to reapply.

Lawyers for Donald Trump say that he received more than $100 million in income from Russian sources in one-time transactions since 2008, but does not have any outstanding debts or holdings in the country.

In addition, the lawyers said “immaterial” amounts were earned through sales of goods to Russians such as hotel rooms, golf fees, and merchandise.

The lawyers’ letter did not address possible Russian financial input into the 2016 Trump campaign, reportedly being investigated by the FBI.

The Treasury’s Financial Crimes Enforcement Network has agreed to a Senate Intelligence Committee request for financial records about possible ties between Russia, the Trump campaign, and Trump’s associates, according to unnamed sources.

The US Attorney’s office for the Southern District in New York sent a message to the Administration via Twitter on Friday:

Acting USAtty Kim: We will not allow the US financial system to be used to launder proceeds of crimes committed anywhere-here or in Russia

In early March, the chief attorney for the Southern District, Preet Bharara, was fired when he refused to resign along with 45 other Obama-era appointments.

Twitter users had their own fun with the statement by the Trump lawyers’, jibing at the phrase “with a few exceptions”, which soon became the #3 trending hashtag:

Michelle Obama Hits Back at Trump Over Cuts in Nutrition Efforts

Former First Lady Michelle Obama criticizes Donald Trump over his elimination of a nutrition program that she pursued while in the White House.

“We’ve got to make sure we don’t let anybody take us back,” Obama said at the annual Partnership for a Healthier America Summit, her first public appearance in Washington since leaving office.

She continued, “Every elected official on this planet should understand. Don’t play with our children. Don’t do it.”

The Trump Administration has retracted nutrition policies that Obama championed, including healthier school meals, calorie labels, and other steps to fight childhood obesity.

“If we really want to make this country great, then our kids need to be healthy and they need to have access to the best,” she said. “Not just some of them, but all of them.”

You have to stop and think: Why don’t we want kids to have good food at schools? What is wrong with you? Why would that be political?”

“It is a core principle that prosecutors should charge and pursue the most serious, readily provable offense,” Sessions wrote in a memorandum on Friday. “This policy fully utilizes the tools Congress has given us. By definition, the most serious offenses are those that carry the most substantial guidelines sentence, including mandatory-minimum sentences.”

The memo rescinds Obama-era guidelines, issued in 2013, to curtail the harshest sentences for defendants charged with low-level drug offenses. The previous memo from Attorney General Eric Holder reserved the most severe sentencing options for “serious, high-level, or violent drug traffickers”

“In some cases, mandatory-minimum and recidivist-enhancement statutes have resulted in unduly harsh sentences and perceived or actual disparities that do not reflect our Principles of Federal Prosecution,” Holder wrote. “Long sentences for low-level, non-violent drug offenses do not promote public safety, deterrence, and rehabilitation.”