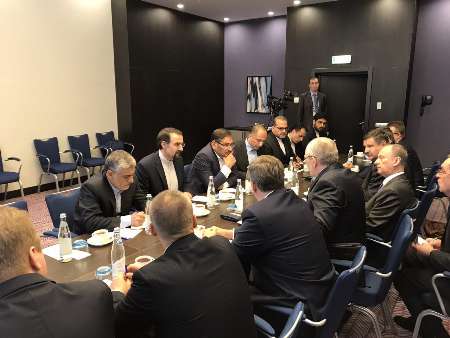 The Secretary of Iran’s Supreme National Security Council, Ali Shamkhani, conferred with senior Russian officials in Moscow on Tuesday over the Syrian crisis.

Shamkhani met his Russian counterpart, Nikolai Patrushev, with both men pledging continued support for the Assad regime as they discussed intelligence-sharing and coordination of military and diplomatic efforts.

Beyond that standard description, Iranian State media offer a clue about detail with a reference to Shamkhani expressing concern about “increased military involvement” of the US and its regional allies.

The Iranian official asserted that military and diplomatic gains by the Assad regime — backed by Russia, Iran, and Hezbollah — have spurred the US reaction. However, he showed some unease with his call for action to “foil plots” by states that “sponsor terrorism”.

Iran has been unsettled by signs of increased US military intervention in the 74-month conflict. On April 7, US warplanes directly attacked an Assad regime position for the first time, striking the airbase from which the regime launched a deadly chemical attack three days later. Last week, the US carried out its first aerial support of rebels, bombing a pro-Assad convoy — reportedly including Iranian troops as well as Hezbollah fighters and Iraqi militiamen — advancing on a Free Syrian Army base in eastern Syria.

The pro-Assad forces tried to move again this week in the desert region of the east, raising the prospect of another clash with the US-supported FSA units.

Iran has also shown reticence in supporting the Russian initiative of “de-escalation zones” in both the northwest and south of Syria. Although Tehran formally signed the proposal alongside Russia and Turkey in early May, there are signs of Iranian unease that opposition areas such as Idlib Province are no longer under sustained attack.

TOP PHOTO: Iranian and Russian officials meet in Moscow, May 23, 2017