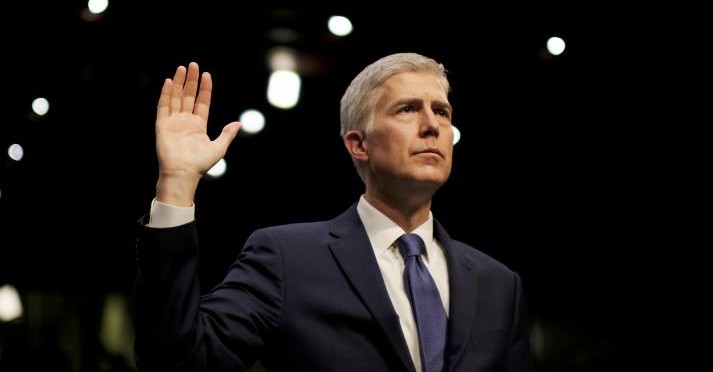 Developments on Day 78 of the Trump Administration:

The Senate approves Neil Gorsuch as a Supreme Court Justice.

The 54-45 vote was a badly-needed victory for the Trump Administration after its failure to replace ObamaCare and impose the “Muslim Ban” on entry into the US, as well as the ongoing investigation of links between Donald Trump’s associates and Russian officials.

Republicans blocked President Obama’s efforts last year to replace Antonin Scalia, who died in February 2016. They refused to hold hearings on his nominee Merrick Garland. The vacancy was the longest on the Court since 1862.

The GOP also had to use the “nuclear option” of removing the 60-vote threshold to end filibusters, lowering the bar to a simple majority.

But Donald Trump maintained after the vote, “Judge Gorsuch’s confirmation process was one of the most transparent and accessible in history, and his judicial temperament, exceptional intellect, unparalleled integrity and record of independence makes him the perfect choice to serve on the nation’s highest court.”

Democratic Senator Jeff Merkley, who delivered a 15-1/2-hour speech earlier this week, disagreed, “Today, for the first time in history, the theft of a Supreme Court seat has been completed, profoundly damaging the integrity of the court.”

The appointment of Gorsuch, 49, is viewed as a possible tilt of a divided Court towards legal conservatism. Three Democrats — Indiana’s Joe Donnelly, West Virginia’s Joe Manchin, and North Dakota’s Heidi Heitkamp — broke ranks to support confirmation. Republicans were united, although Senator Johnny Isakson missed the vote while recovering from back surgery.

Kushner Did Not Disclose Dozens of Encounters With Foreign Contacts

Kushner was required to report all contacts he had with foreign government officials over the past seven years. He omitted discussions such as those with Sergey Kislyak, the Russian Ambassador to the US, and Sergey Gorkov, the head of Russia’s state-owned Vnesheconombank.

The Senate Intelligence Committee informed the White House two weeks ago that it wishes to question Kushner about these meetings. Kushner said he is willing to testify.

Kushner’s lawyer Jamie Gorelick said the omission was an error.

Unemployment drops again to reach its lowest point in almost a decide, but US employers cut back sharply on hiring in March.

Even though employers added just 98,000 jobs, barely half the previous month’s gain, the unemployment rate dropped from 4.7% to 4.5%.

An alternative unemployment measure, which includes involuntary part-time workers, fell to 8.9%, its lowest level since December 2007. The peak for the rate was 17.1% in 2010.

Twitter had filed a lawsuit on Thursday over Homeland Security’s attempt to unmask those behind @ALT_uscis, an account allegedly run by current and former CitizTenship and Immigration Services employees.

The DHS summons had threatened legal action if Twitter did not comply — and asked the social media site not to disclose the existence of the demand. However, the American Civil Liberties Union soon said that it would file a lawsuit on behalf of @ALT_uscis.

NSC Gives North Korea Options to Trump, Including Assassination and Nukes in South

The US withdrew all nuclear weapons from South Korea 25 years ago. Returning them to Osan Air Base, less than 50 miles south of the capital Seoul — would be the first overseas nuclear deployment since the end of the Cold War.

Two military sources said an alternative is deployment of long-range strategic bombers, with exercises in the region and positioning on Guam and the Korean peninsula.