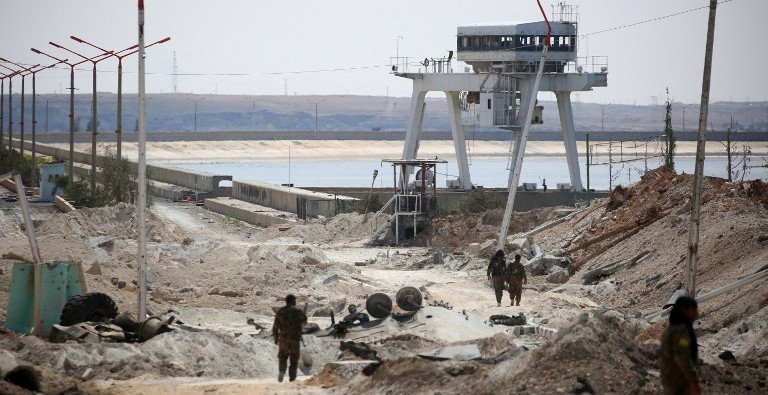 The Islamic State has tried to fight back near its center of Raqqa in Syria, attacking the US-supported, Kurdish-led forces who are trying to take a major dam 40 km (25 miles) west of the city.

The Syrian Democratic Forces said they repelled the counter-attack at the Tabqa Dam on the Euphrates River.

The SDF — backed by US airstrikes, weapons, special forces, and an airdrop of troops — seized the northern part of the 4.5-km (2.8-mile) dam last weekend, but ISIS fighters continue to hold the southern portion.

US airstrikes damaged control rooms at the dam last weekend. ISIS and local activists said the structure was in danger of collapse, but the US military and the SDF denied there was any “imminent danger”.

See Syria Daily, March 29: Is Taqba Dam in Danger of Collapse After US Airstrikes?

The Islamic State also attacked the Tabqa Airbase, captured just over a week ago by the SDF, and northeast of the ISIS-held town of Tabqa.

After months of political disputes, the SDF is planning to move on Raqqa, controlled by ISIS since late 2013. The US appears to have resolved or put aside Turkish objections to the offensive — Ankara considers the Kurdish militia YPG, which leads the SDF, as part of the Turkish Kurdish insurgency PKK.

Families continue to flee the area, both because of the fighting and of US airstrikes which have killed scores of civilians as they tried to hit ISIS targets.

The SDF said at least 7,000 people have been displaced and taken shelter.

About 6,000 Free Syrian Army fighters from the Turkey-rebel Euphrates Shield Operation will join the SDF’s offensive on Raqqa, according to the opposition outlet Zaman al-Wasl.

Haytham al-Afisi, an Euphrates Shield commander and former Syrian army colonel said the US has requested the commanders of the FSA groups ensure unity to receive weapons and funding. He claimed pressure from Washington had made Turkey lift its objections to the Kurdish-led operations.

The Lebanese pro-Assad newspaper al-Akhbar claims that Democratic Representative Tulsi Gabbard of Hawaii brought an offer of cooperation from the Trump Administration to President Assad.

The article from editor Ibrahim al-Amin is based on a range of sources who appear to be close to the regime.

Al-Amin claimed that Assad presented documents confirming the involvement of US security officials in “terrorism”.

Gabbard, supposedly told by Trump that Assad’s removal is no longer in US interests, said to Assad, “My boss is asking if you will answer your phone if he calls.”

Assad’s claimed reply: “Yes, this is my phone number.”

Supported by scores of airstrikes, pro-Assad forces have regained another village in northern Hama Province.

Pro-opposition activists say Maardas was lost on Monday. That leaves the town of Souran as the remaining significant gain from the rebel offensive that was launched two weeks ago.

Some activists report more than 200 airstrikes today, including sustained bombing of the town of Halfaya.

Regime forces have also bombed intensively to try and retake parts of Jobar in northeastern Damascus after a rebel offensive last month, with 66 strikes reported on the area and nearby suburbs.

E. #Damascus: #Jobar and surrounding areas are also targeted by huge number of airstrikes after failed attempts by Regime to advance. pic.twitter.com/AcyCWq6Scv

The Free Syrian Army has condemned an agreement for removal of people from two regime enclaves and two besieged opposition-held towns, arranged between the factions Ahrar al-Sham and Hay’at Tahrir al-Sham and the Assad regime’s allies Iran and Hezbollah.

The agreement, reached last week through Qatari mediation, provides for movement from the enclaves of al-Fu’ah and Kafraya, north of Idlib city, and the towns of Madaya and Zabadani in Damascus Province, besieged by the Assad regime and Hezbollah since July 2015. The regime will also release 1,500 detainees, including as many women as possible, and nine-month truces will be established for other towns in Idlib Province and suburbs south of Damascus.

The FSA says the agreements “establishes a dangerous phase of ethnic and sectarian cleansing in preparation for redrawing the borders of the Syrian state”, calling the removals a “crime against humanity”. It called on the UN Secretary General and Security Council to condemn the deal.

In their ongoing attacks in northwest Syria, pro-Assad warplanes have struck the national hospital in Maarat al-Num’an in Idlib Province.

Ten people were injured, including a member of hospital staff. The hospital, supported by the Syrian American Medical Society, is now out of service.

The White Helmets civil defense organization indicated the strikes were by the Russians, with three attacks using thermobaric bombs.

A SAMS-supported hospital in Idlib was hit by 2 airstrikes today. The same hospital that was treating victims of chemical attacks last week. pic.twitter.com/OoPzqCajhZ