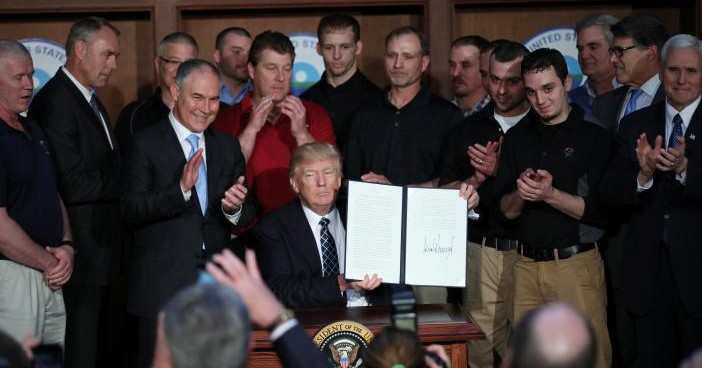 Trump: “I am taking historic steps to lift restrictions on American energy, to reverse government intrusion and to cancel job-killing regulations”

Developments on Day 68 of the Trump Administration:

Flanked by coal miners and coal company executives, Trump proclaimed his “Energy Independence” order at the headquarters of the Environmental Protection Agency.

The main target is the Clean Power Plan, which required states to slash carbon emissions from power plants — essential to fulfil the US commitments under the Paris climate change accord agreed by nearly 200 countries in 2015.

The order also reverses a ban on coal leasing on federal lands, undoes rules to curb methane emissions from oil and gas production, and reduces the weight of climate change and carbon emissions in policy and infrastructure decisions.

The Trump Administration has issued a series of orders challenging environmental protection, including lifting of the restriction on coal dumping near streams. It plans to slash the EPA’s budget, forcing the termination of a series of programs, and placed Scott Pruett — an Oklahoma Attorney General who joined numerous lawsuits against the EPA — to head the agency. It is proposing to end almost all climate change research programs in the Federal Government.

A coalition of mostly Democrat-led states and local governments said they will pursue a legal challenge to the order.

“We won’t hesitate to protect those we serve — including by aggressively opposing in court President Trump’s actions that ignore both the law and the critical importance of confronting the very real threat of climate change,” the coalition, led by New York Attorney General Eric Schneiderman, said in a statement.

The groups includes states such as California, Massachusetts, and Virginia and cities including Chicago, Philadelphia, and Boulder, Colorado.

Trump used Twitter for a series of general allegations about Clinton, his Democratic opponent in the Presidential election; her husband, former President Bill Clinton; and her Chief of Staff, John Podesta:

…money to Bill, the Hillary Russian "reset," praise of Russia by Hillary, or Podesta Russian Company. Trump Russia story is a hoax. #MAGA!

The claims promoted by Fox are largely a series of right-wing speculations and exaggerations — the uranium transaction was by the US Government, not Hillary Clinton, and Podesta’s primary financial involvement was with a Dutch company — but Trump has repeated invoked them, initially in the 2016 election and then to push away the revelations about his own campaign’s contacts with Russian officials and firms.

FBI Director James Comey confirmed on March 20 that US agencies are investigating the Trump-Russia case, as the House Intelligence Committee opened hearings. Subsequent sessions have been held up by committee chairman Devin Nunes’ collaboration with the White House, but the Senate Intelligence Committee is now setting up its proceedings, summoning witnesses such as Trump’s son-in-law and senior advisor Jared Kushner.

Nunes said he will not proceed because “until [FBI Director James] Comey comes forward, it’s hard for us to move forward with interviews and depositions”.

The GOP legislator met an official on the White House grounds last Wednesday, supposedly receiving intelligence reports, and then briefed Donald Trump. Nunes subsequently offered a limited apology, including for his failure to consult other committee members before going to the White House.

According to several Democrats on the committee, Nunes also canceled two regular panel meetings this week without giving them a reason.

The White House asked for a veto over any testimony by former acting Attorney General Sally Yates before the House Intelligence Committee on Trump-Russia links.

Yates was dismissed in late January, after she said that Trump’s “Muslim Ban” on entry into the US was legally indefensible. Just before the firing, she warned White House counsel Don McGahn that National Security Adviser Michael Flynn had misled his superiors about his conversations on December 29 with the Russian Ambassador to the US.

When Yates accepted an invitation to testify before the House Intelligence Committee, she was told by the Justice Department that she would need to clear her testimony with Trump.

The Justice Department said any information that Yates received or actions she took were “client confidences”. Yates’s attorney David O’Neil said the assessment is “overbroad, incorrect, and inconsistent with the department’s historical approach to the congressional testimony of current and former officials”.

Donald Trump proposes immediate budget cuts of $18 billion from programs such as medical research, transportation projects, and community grants to fund his initial payment towards “The Wall” on the US-Mexican border.

The cuts are necessary because Mexico will not cover the down payment on the border wall, as Trump pledged in his campaign and after his inauguration.

The proposal was submitted to Congress amid negotiations over a catch-all spending bill to a partial government shutdown on April 28, when current appropriations end.

The cuts will eliminate $1.2 billion in National Institutes of Health research grants. They will halve the community development block grant program, releasing $1.5 billion, and will strip $500 million from a grant program for transportation projects.

The House of Representatives followed the Senate’s approval in a 215-205 vote.

ISPs have argued that the regulation would put them at a disadvantage versus “edge providers”, like Google and Facebook, who are regulated by the Federal Trade Commission and face less stringent requirements.