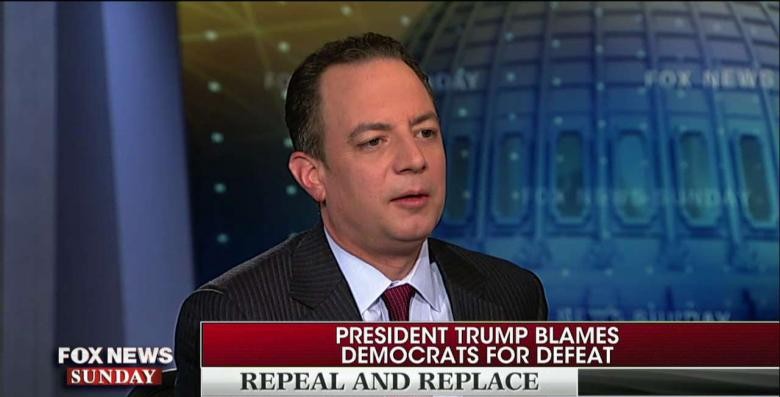 Will Trump Administration reach out to Democrats after healthcare debacle?

Developments on Day 66 of the Trump Administration:

With the collapse of plans to replace ObamaCare, the Trump Administration tries to regain the political initiative with talk of tax reform.

Donald Trump had said that any pursuit of tax reform had to come after approval of the GOP healthcare bill, but with Friday’s defeat a quick change of focus was needed.

Trump pointed to the move on Friday, in his response to the withdrawal of the American Health Care Act, and White House Chief of Staff Reince Priebus sounded the call on a Sunday morning talk show.

Priebus, blamed by other White House insiders for the healthcare debacle, told Fox News that the Administration could reach out to Democrats as well as moderate Republicans.

If we can come up with a bill that accomplishes the goals of the president with Republicans alone, we’ll take it and we’ll move forward with it….

[But] I think [this is] more or less a warning shot that we’re willing to talk to anyone. We always have been and I think more so now than ever.

That is a marked shift from a Trump approach which had tried to bulldoze over the Democrats and any GOP opposition, first with a series of executive orders and then with the healthcare bill. But with Republican conservatives of the Freedom Caucus triggering the demise of the AHCA, Priebus and allies are pushing for a revised strategy.

The Chief of Staff said, “I think the President is disappointed in the number of people he thought were loyal to him that weren’t.”

Democrats are smiling in D.C. that the Freedom Caucus, with the help of Club For Growth and Heritage, have saved Planned Parenthood & Ocare!

However, Brady raised the possibility of a new clash with the Administration, saying the House blueprint should be the basis for Trump’s tax reform plan rather than competing versions from the Treasury and White House.

Representative Mark Meadows, he chairman of the Freedom Caucus, said on Sunday that he was optimistic on tax reform and that his group could support a plan that is not revenue-neutral:

Tax reform and lowering taxes, you know, will create and generate more income. And so we’re looking at those, where the fine balance is. But does it have to be fully offset? My personal response is “no”.

Another Freedom Caucus legislator, Jim Jordan, said, “Instead of doing the blame game, let’s get to work.”

Priebus: Trump’s TV Tweet Was Not Attack on Ryan

In his interview with Fox News Sunday, Priebus denies that Donald Trump’s tweet pushing readers towards a Fox TV show was an attack on Speaker of the House Paul Ryan over the failure of the healthcare bill.

On Saturday, Trump urged followers to watch Jeanine Pirro, who began her program with a call on Ryan to quit as Speaker.

Priebus insisted, to the disbelief of interviewer Chris Wallace, that Trump’s tweet was “coincidental”.

Immediately after Friday’s withdrawal of the bill, White House insiders began blaming Ryan for the defeat. Some also targeted Priebus.

The White House Counsel’s Office was told this month that the Senate Intelligence Committee wants to question Kushner about meetings he arranged with Russian Ambassador Sergei Kislyak, including a sit-down with the head of Russia’s state-owned development bank.

Until now, the White House acknowledged only an early December meeting at Trump Tower between Mr. Kislyak and Mr. Kushner, also attended by Michael Flynn, who resigned as National Security Advisor after his later phone conversations with Kislyak.

Later in December after a request by Kislyak, Kushner met Sergei Gorkov, the chief of Vnesheconombank, which the US sanctioned after the Russian annexation of Crimea and support of Ukrainian separatists.

White House spokeswoman Hope Hicks said Kushner was willing to talk to Senate investigators about the meetings with Kislyak and Gorkov: “He isn’t trying to hide anything and wants to be transparent.”

Kushner said of the White House Office of American Innovation:

We should have excellence in government. The government should be run like a great American company. Our hope is that we can achieve successes and efficiencies for our customers, who are the citizens.