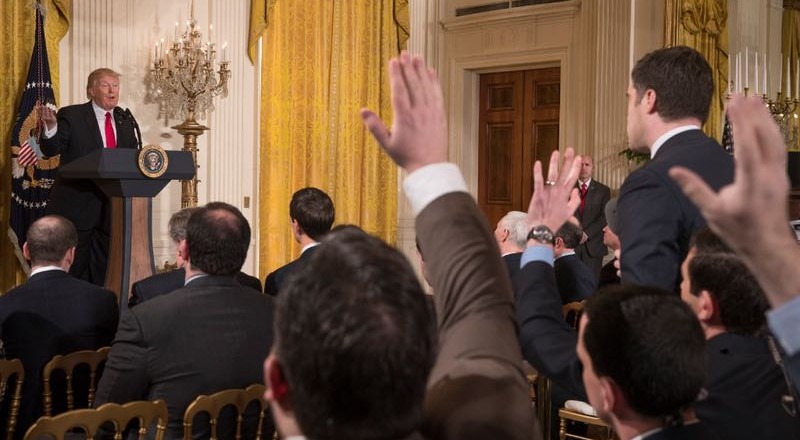 Meet some of Donald Trump’s “enemies of the American people”

The FAKE NEWS media (failing @nytimes, @NBCNews, @ABC, @CBS, @CNN) is not my enemy, it is the enemy of the American People!

An enemy of the American people came into my office Friday night to talk about a story he was working on.

The story was about a 17-year-old kid involved in a controversy at his school. The enemy of the people was concerned because the kid is going through a difficult time. Telling the story could make things worse. In the end, the enemy of the people decided to keep gathering information but not rush to publication.

Just before that conversation, I had spent a couple of hours talking to aspiring enemies of the people from the University of Texas Enemies of the People School. A half-dozen of them had come from Austin to interview for the one-year fellowships we award to young enemies who are interested in working in our Washington, D.C., and Austin bureaus.

One enemy of the people mentioned she takes a full class schedule, has a leadership role at the student newspaper and logs 20 hours a week at a news organization in Austin. I asked her whether she came from a family of enemies of the people, and she said yes, as a matter of fact, her mother was an enemy of the people, but she died a couple of months ago. I said I was sorry and she said, “It’s OK,” but I knew it was not OK and will never be OK.

In my job I oversee about 250 enemies of the people. We have enemies of the people who make maps, cover high school baseball, send tweets about the Cowboys, assign book reviews, critique restaurants, track North Texas home prices and write profiles of tech entrepreneurs. One enemy of the people spends his days talking to grieving families and carefully crafting the stories of the dead.

FAKE NEWS media, which makes up stories and "sources," is far more effective than the discredited Democrats – but they are fading fast!

Some enemies are adopted. Some adopt dogs. Many wear glasses. Enemies of the people are now engaged in an office weight-loss challenge.

The fake news media is going crazy with their conspiracy theories and blind hatred. @MSNBC & @CNN are unwatchable. @foxandfriends is great!

Enemies of the people, being people, have biases. They try not to let the biases show in their work, but sometimes it happens.

One young enemy of the people buried his mother and his father in a six-month span. Four have cancer, that I know of. One had been an enemy of the people for more than three decades when doctors found an egg-sized tumor in his brain, and now he has a surgical scar over his left ear that looks like a question mark.

Times are hard in our business. Recently I had to tell 50 enemies of the people that I will soon have jobs for only 30 of them. We interviewed all of them for the available positions, and one after another, they said, “I do a good job, but so does the enemy of the people who sits next to me, so you need to be sure to keep him.”

When an enemy of the people leaves us, we give sad, awkward speeches and eat cake.

I am so proud of my daughter Ivanka. To be abused and treated so badly by the media, and to still hold her head so high, is truly wonderful!

On Friday, an enemy of the people made a mistake in a headline. (For a lot of enemies, making a mistake is the only thing worse than hearing they’ll be among 50 people eligible for 30 jobs. I’ve seen enemies of the people cry, literally cry, about spelling a name wrong.) On Saturday we corrected the error.

We have enemies of the American people who cover the nation’s most powerful and important leader, bearing witness to everything he says. Enemies of the people understand the importance of choosing the right words because they know the damage the wrong words can do.