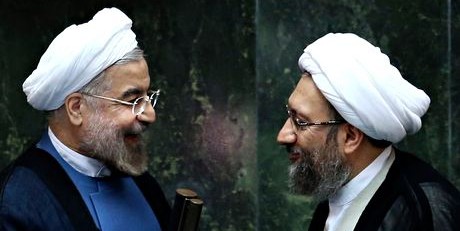 Iran’s judiciary has stepped up its fight with Hassan Rouhani over alleged corruption, trying to link the President to an imprisoned billionaire who is facing the death penalty.

The judiciary’s spokesman, Gholam Hossein Mohseni Ejei, implicitly repeated the allegation that Babak Zanjani — condemned in March for allegedly embezzling billions of dollars in Government revenues — had helped finance Rouhani’s 2013 campaign for the Presidency. the spokesman responded to Rouhani’s call for more transparency in the judiciary: “[He] should also tell the public how much he has spent during the presidential elections and from which sources and people he has received money.”

Tension between Rouhani and the hardline head of judiciary, Sadegh Larijani, has escalated since Larijani was accused this autumn by reformist MP Mahmoud Sadeghi of using public funds for his personal affairs. The judiciary responded by trying to arrest Sadeghi at his home, but protesters convened and helped block the detention. In early December, Sadeghi told an audience at Tehran University that he had filed a complaint against Larijani in Iran’s Clerical Court.

On Monday, Larijani tried to turn the attention onto the President: “Babak Zanjani has said that he aided the President’s campaign [in the 2013 election] with millions of dollars. We don’t consider his words as completely true….[But] now that you [Rouhani] are saying we should pursue the behind-the-curtains [issue], I have no problem: We will summon all those who were named by [Zanjani], and if necessary, we will detain them to find out what the issue was.”

A senior Presidential advisor denied any evidence of Zanjani’s contributions to the campaign, and Rouhani hit back by challenging the judiciary for more information and alluding to the allegations against Larijani: “The judiciary has a very heavy weight on its shoulders in this regard and must be responsive.”

On Wednesday, Rouhani advisor Akbar Torkan dismissed Larijani’s claims over Zanjani: “We are ready to disclose our sources of money on the condition that all the candidates of that election come forward and say where they received money and where they spent it.”

Tehran Attorney General Mohammad Jafar Montazeri stepped up the challenge to the judiciary and “some judges”: “Iran has a judiciary that has entered the valley of corruption after several years….The judicial branch today has a dire need for revolutionary, pure, and religious judges.”

On another front, 46 MPs have effectively backed the judiciary against the President, asking for an investigation of Rouhani’s brother and advisor Hossein Fereydoun.

Fereydoun has been caught up in the “payslips scandal”, which broke this spring over excessive salaries and bonuses for Government officials. In July 2016, a group of MPs accused Fereydoun of corruption: they alleged he recommmended the appointment of several bank directors who were later dismissed as the scandal escalated.

(h/t to Iran Tracker for translations)

The Interior Ministry has denied that pipelines in southwest Iran were blown up by an Ahwazi Arab group.

The Arab Struggle Movement for the Liberation of al-Ahwaz had claimed responsibility for fires at the Maroun pipeline and pipelines from the Baharkan oilfield to Kharg Island.

“The report is untrue and we faced no security threats,” said Salman Samani, an Interior Ministry spokesman.

An official with the Iranian oil company assertedg, “The news has been reported by a group of separatists called Ahwazi, and is categorically untrue.”

Anticipating a post-sanctions recovery in Iranian oil production and exports, the world’s largest oil exporter has advanced $1 billion to the Islamic Republic.

Vitol signed the deal with the National Iranian Oil Company to provide the money in Euros, with the loan and 8% interest guaranteed by future exports of refined products, said four sources familiar with the agreement.

The pre-finance deal is the first major contract between Iran and a trading house since Nanuary’s implementation of the July 2015 nuclear deal.

Iran has also announced a series of memoranda of understanding with foreign oil companies in recent weeks, including Royal Dutch Shell and France’s Total and Schellenberger.

However, the completion of deals for essential foreign investment in Iran’s oil and gas fields are still being held up by disagreements over the details of a new Iran Petroleum Contract and by internal opposition from the Revolutionary Guards, who fear a reduction in their holdings in the energy sector.

Foreign companies also are cautious over the prospect of US punishment if Washington finds them guilty of violating American financial restrictions.