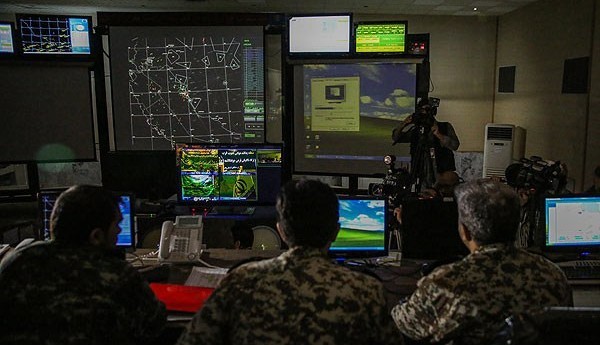 UPDATE 1530 GMT: The Supreme Leader has warned of the threat from the US, comparing it to a burglar:

They would attempt to disarm the householder through guile and various means such as talking, joking, smiling, and rebuking and enter the house.

Today, the geometry defining the arrogant powers’ confrontation with the Islamic Republic is directed toward robbing the Iranian nation of its material and spiritual power and conviction. In turn, we should preserve and strengthen that power day by day.

Speaking to seminary students, he proclaimed, ““In the face of such enmities, the Islamic Republic should increase its strength; and that is the very reason for the insistence on the enhancement of domestic power and the reinforcement of domestic structures.”

The “Defenders of Velayat Skies 7” exercises are being held over an area of 496,000 square km (308,000 square miles) throughout southern Iran. About 17,000 military personnel members are taking part in the drills with the Army Air Force’s warplanes, including F-4 Phantoms, and low-, medium-, and high-range missile systems.

On Tuesday, Iranian State media proclaimed that the “Iranian Army successfully testfired mid-range missiles against hypothetical enemies that invaded some sensitive sites in southern parts of the country”.

The Iranian military regularly declares that it can repel a US challenge, embarrassing the Americcan military. Two days after the November election of Donald Trump, the head of Iran’s Joint Chiefs of Staff announced:

Due to the foresight of Leader of the Islamic Revolution, Ayatollah Seyyed Ali Khamenei, our missile might has reached a point where it does not allow the enemies to even think about attacking Iran….Threatening the Islamic Republic of Iran in the Strait of Hormuz and the Persian Gulf is a mere joke.

See Iran Daily, Nov 11: Military’s Tough-Talk Challenge to Trump — “He Talks Off the Top of His Head”

The Supreme Leader told Revolutionary Guards commanders and officials in September, “Upgrade your preparedness and options constantly for countering all types of threats.”

Despite the rhetoric, Iran’s air force struggles to match those of other countries in the region, let alone the world’s top powers. The US-made F-4 Phantoms date from the early 1960s and were phased out of most militaries by the early 1990s. Cut off by Western countries after the 1979 Islamic Revolution, Tehran has not been able to upgrade its squadrons.

Supreme Leader’s Top Aide: “Muslims Are Safe Only In Iran”

The Supreme Leader’s top aide has declared that Muslims are safe only if they are in Iran.

At a conference on Monday night, Ali Akbar Velayati said the Islamic Republic is the only safe haven from “deviants and extremists” such as the Islamic State, the Syria-based Jabhat Fatah al-Sham, and Al Qa’eda.

Velayati added, “Only Muslims have fought against disbelief and hypocrisy….Western religious organizations such as the Vatican has not played any role in confronting disbelief.”

Calling Western media the ‘devil’s horn’, Velayati said they show images of the beheading of innocent people by ISIL, introducing them as an Islamic state. “Islam is the religion of mercy and ISIL is portraying global savages in the name of Islam,” he noted.