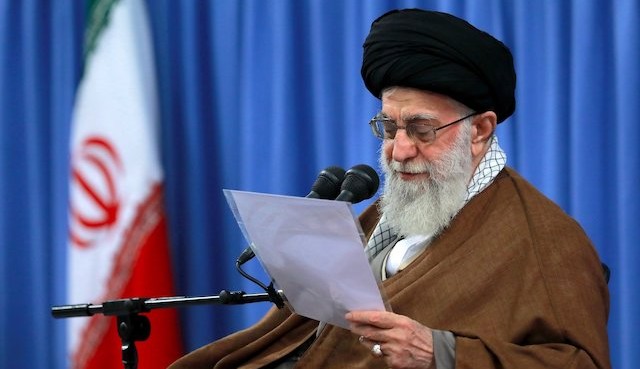 Iran’s Supreme Leader has used the US Presidential elections for another attack on Washington — and a warning to the Rouhani Government.

Ayatollah Khamenei spoke in Tehran on Wednesday, two days before the 37th anniversary of the takeover of the US Embassy. He denounced a “dangerous way of thinking…that if we compromise with the US all our country’s problems will be solved”.

The Government’s quest for economic recovery, following the implementation of the nuclear deal, has been unsettled both by continuing US sanctions and by regime in-fighting.

In the past two weeks, the Revolutionary Guards have stepped up their criticism of the Government’s pursuit of foreign investment — vital for areas such as the energy sector — which could challenge the Guards’ extensive holdings in the Iranian economy. The Supreme Leader’s office has supported the campaign through guidelines to Friday Prayer leaders chiding Rouhani’s “constructive engagement”.

Resistance of Islamic Establishment and Iranian nation against US is based on totally logical reasoning. pic.twitter.com/Owpl6mO0Ld

Khamenei said the US Presidential debates had shown “the destruction of human values in America”. He then asserted:

Negotiating with the U.S. will not only fail in resolving our problems, but will also intensify them. We should resolve our problems on our own, and by having faith in our youth’s capabilities and their promising potentials….

Now it is not just me saying that they are disloyal. Now the country’s respected officials and even the negotiators themselves, who bore a great burden, are talking about America’s disloyalty.

Currently some are saying that we must negotiate and compromise with this same America on Syria, Lebanese Hezbollah, Iraq, Afghanistan, Yemen, and even domestic issues. The issue of the JCPOA [nuclear agreement] and the Americans’ strategy towards us afterwards are a clear example of why this belief is incorrect.

The Supreme Leader’s litany continued with the question of an “afflicted” US, “How can a crisis-stricken country fix another country’s problems?”

Racism & poverty in US & access of 1% of people to 90% of wealth & abuse of human values & human rights are realities of today US society.

Revolutionary Guards “in US and Europe Very Soon”

An officer of the Islamic Revolutionary Guards Corps has ensured headlines in American outlets with the declaration that the Guards “will be in the US and Europe very soon“.

Salar Abnoush, the deputy coordinator of the IRGC’s engineering branch Khatam al-Anbia, proclaimed that “the whole world should know” of the advance of the Iranian elite force:

Today our enemies in every way use gimmicks to destroy the Islamic Revolution, but they failed. All this is thanks to the supreme leader.

The enemies of the Islamic Revolution after the war wanted to impose their will upon us, but fortunately the Resistance Front has completely paralyzed them.

An Iranian court has cleared 20 men accused of “deliberately destroying” the Saudi Embassy during a crowd attack on January 2.

A lawyer for the several of the defendants said some had been given sentences from three to six months for “disturbing the public order” .
The attorney added that all 20 defendants “had served in Syria” as part of Iran’s political and military intervention.

More than seven years after he was first accused of involvement in the deaths of protesters of Iran’s disputed Presidential election, former judge and prosecutor Saeed Mortazavi has been sentenced to 135 lashes.

However, Mortazavi was not given the punishment for the abuse and killing of detainees in the Kahrizak facility when he was Tehran Prosecutor General. Instead, he was condemned for the seizure and waste of public funds in 2012 and 2013, when he was the head of the Social Security Organization.

As a judge, Mortazavi was known for his role in closing many reformist newspapers. He was also accused by Canada of involvement in the torture and fatal beating in 2003 of Iranian-Canadian photojournalist Zahra Kazemi at Evin Prison in Tehran.

After the appeal of some prominent conservatives — including the father of one of the men killed in Kahrizak — Mortazavi was suspended as the Tehran prosecutor in August 2010. However, President Mahmoud Ahmadinejad soon appointed him to head the Social Security Organization, defying a court order for Mortazavi’s removal.

Mortazavi finally went on trial in February 2013. However, the proceedings were held behind closed doors and no verdict has even been announced.