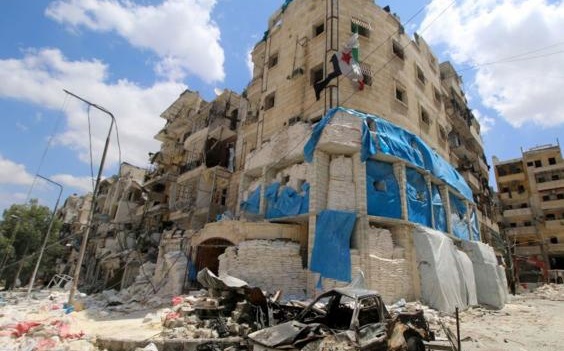 The Russian-regime airstrikes which have damaged hospitals in Aleppo in the past week are only the latest attacks in a campaign to devastate health care in Syria’s opposition areas. Since Russia’s aerial intervention began last September, scores of medical facilities have been destroyed or damaged, killing hundreds of doctors, nurses, rescuers, patients, and visitors.

The international medical organization Médecins Sans Frontières‎ has issued a report on one of the most destructive attacks, the bombing of Aleppo’s al-Quds Hospital in late April that killed more than 50 people.

On 27 April 2016, amidst the Syrian government-led coalition’s offensive on East Aleppo, Basel Aslan (al Quds) hospital was attacked and severely damaged by two airstrikes. According to interviews with staff present at al-Quds hospital during the attack, at exactly 9:37 p.m., a building across from the hospital, identified as Ain Jalout school, was struck by an airstrike. Following the first strike, al-Quds medical staff retrieved the wounded to transfer them to the hospital for medical care. Soon after, the al-Quds staff residence, located a few buildings down from the hospital, was hit by a second strike.

Quantifying the attack’s exact number of victims was hindered by the difficulty of recovering bodies from deep under the rubble caused by the attack. According to al-Quds management, as of 4 May the total death toll of the 27 April attack on Al Quds hospital was 55. The dead included 6 Al Quds staff, namely 1 pediatrician, 1 dentist, 2 nurses, 1 technician and 1 guard. Eight of the hospital staff were also seriously injured. The pediatrician and dentist killed were said to be among the last medical specialists left in East Aleppo
after five years of war. Approximately 80 people were injured. Al-Quds re-opened 20 days after the attack, but not all services were activated and capacities were greatly limited given that (a) two operational floors were destroyed, (b) two specialist doctors and two nurses died and (c) significant medical equipment had been lost. Pediatric, cardiology and neurology services were suspended, as the hospital’s pediatrician was killed and essential medical equipment was destroyed. Also, the emergency room and lab, along with their vital supplies, were lost. The internal medicine, gynecology/obstetrics and general surgery departments were progressively restarted, but operating with great limitations.

The 34 beds were reduced to 12, diminishing the hospital’s capacity to one-third. The sanitation system, water tank and the hospital’s structure were also badly damaged. Following the attack, half of Al Quds’s 5,000 estimated monthly patient load were forced to seek healthcare elsewhere.

Al Quds is the only cardiology, neurology, and pediatric ICU hospital in East Aleppo, as well as a main referral center for gynecology/obstetrics and chronic disease patients. The majority of the hospital’s patients have struggled to access medical care following the 27 April attack. Due to access and security-related restrictions, the only alternative options for all cardiology, neurology and ICU pediatric cases are health facilities bordering or inside Turkey. Because of the depletion of Al Quds’s remaining specialty medical services, patients have sought treatment from the few other health facilities in East Aleppo for pediatrics, gynecology, chronic diseases and general surgery. Three of these alternative referral hospitals were attacked within a month after the 27 April attack, further stretching medical facilities’ capacities amid the patient overload. The other main gynecology/obstetric referral hospital was forced to stop services because of an attack and re-directed all cases back to al-Quds. As a result, patients have continued seeking medical services from Al Quds, despite its post-attack limitations during its rehabilitation, because of a lack of greater access to healthcare in East Aleppo.

A clear trend of attacks on medical missions has been recognized and recorded since the beginning of the conflict by MSF, as well as many local and international actors. To MSF’s knowledge, the bombardment of al-Quds on 27 April was the seventh attack on a health structure in April 2016 in opposition-held areas of Aleppo governorate. Following the bombardment of Al Quds, medical facilities were bombarded every day for four days in these areas. A total of 14 medical facilities were attacked in opposition-held Aleppo in April
2016. Beginning in July 2016, periods of siege were imposed on Aleppo City, restricting people’s right to flee and further strangling humanitarian access. July also reportedly saw the greatest number of attacks on health facilities in Aleppo since the start of the conflict, with bombardments and periods of siege continuing into August and September.

The eight hospitals and few medical facilities remaining in East Aleppo are struggling to respond to the medical needs of the estimated 250,000 people. More attacks have resulted in more patients needing more services. Faced with every constraint, health facilities continue to respond. Whilst attacks on medical facilities have been taking place throughout the conflict, 2016 has seen a surge of
bombardments affecting the population’s access to medical care. The rise of these bombardments in Aleppo coincides with the Syrian government-led coalition’s offensive on the city. It is very difficult to determine or prove the intention behind these attacks. As a humanitarian organization, MSF is not in a position to establish military intention and it is neither prepared nor equipped to conduct formal investigations or participate in proceedings. However, MSF believes that: 1) medical action in Syria is not protected;
2) the parties to the conflict do not meet the necessary obligations of precaution in the attacks as enforced by International Humanitarian Law; and 3) the review of the information available suggests that in certain cases the attacks could be targeted against medical action.