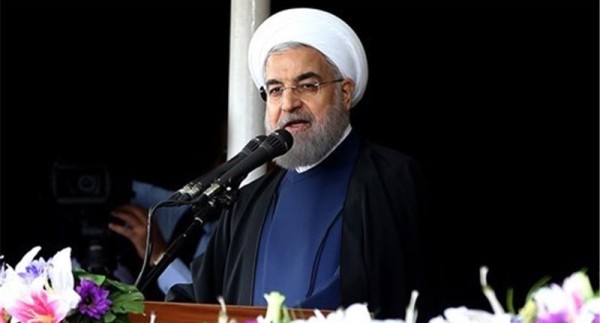 PHOTO: President Rouhani “We should come back to the present, some are living in centuries ago”

Facing challenges at home and abroad to his pursuit of economic recovery, Iran’s President Rouhani has confronted the Revolutionary Guards in his call for greater foreign investment.

The President had hoped for a surge in exports, production, and investment following January’s implementation of the July 2015 nuclear agreement with the 5+1 Powers.

Iran’s oil production and sales have recovered by about 40%, closing on the levels of 2012 before the most stringent US and European sanctions were imposed. However, investment — including multi-billion-dollar deals with European firms — has been held up by a combination of external and internal barriers.

Washington has ruled out any access to the American market, and European banks and companies have been reluctant to confirm arrangements because of fear of continuing US sanctions.

US Secretary of State John Kerry said last week that removal of financial and banking restrictions have been complicated by Iran’s intervention in the Middle East and testing of ballistic missiles. The Supreme Leader responded on Wednesday, questioning US sincerity in negotiations and denouncing a “lack of spirituality” in American politics.

But Rouhani also faces challenges from within the regime. Critics inside and outside Parliament have hindered completion of a new Iran Petroleum Contract to ensure foreign investment to develop oil and gas fields. The bureaucracy has been slow to deal with regulations hindering input from outside companies.

Perhaps most significantly, the Revolutionary Guards have been wary of any foreign contracts which could cut into their extensive economic holdings, including in the energy sector.

That concern has turned to hostility on several occasions this year, to the point of warning of “sedition” within the Government.

On Monday the Guards commander, Major General Mohammad Ali Jafari, claimed “some officials” have “conflicting views” with the Supreme Leader because they are “looking outwards” for “solutions to the country’s problems”.

Jafari did not name the officials, but Rouhani responded on Thursday:

Some think that when we say “constructive interaction”, we mean sitting down with Westerners and Europeans and smiling at them, or talking with them, or dining with them. It isn’t so.

Can any country say today that it has progressed without relations with the world?

The President responded to suspicion of the US, “You cannot shut down the entire garden and not eat the fruit if a rotten apple is found.”

And he chided his critics, “We should come back to the present time, some are living in centuries ago”.

Labor rights activists Jafar Azimzadeh and Shapour Ehsani Rad have been given 11-year sentences for their activism.

A Revolutionary Court gave each man 10 years in prison for “organizing and operating an illegal group” — the Free Workers Union of Iran and one year in prison for “propaganda against the state”.

Azimzadeh is President of the FWUI and Ehsani-Rad is a member of the board of directors.

Azimzadeh was also sentenced to six years in prison in March 2015 for “assembly and collusion against national security” and “propaganda against the state”. In July 2016 he was temporarily released on furlough after he went on a two-month hunger strike demanding the authorities reconsider his case.

The two men are also due to appear in the Saveh Criminal Court for “disturbing public opinion” and “disrupting public order”, because of their alleged incitement of a strike by workers at the Safa Rolling and Pipe Mills Company in 2015.

The intervention is the first time since the 1979 Islamic Revolution that MPs have challenged the conviction of a person accused of anti-state activities.

“We plead with you to show Islamic mercy and nullify the sentence and order a new trial,” the MPs said in a letter to the head of judiciary, Sadegh Larijani. “Your Excellency is aware that issuing such sentences against critics would only raise the cost of constructive criticism, isolate critics and drive society into stagnation.”

The MPs described Mohammadi as a person who “has for years worked for women’s rights” and who has shown “she cares dearly for our dear country”. They noted that the mother of two young children has suffered from life-threatening illnesses.

A judiciary official indicated that the request would be rejected.

Prosecutor General Mohammad Jafar Montazeri said the MPs had “supported individuals who are part of an evil triangle” and should have investigated the case “before defending outcasts”.

In September 2016 the Appeals Court upheld Mohammdi’s sentence, of which she must serve 10 years, for membership in the Step by Step to Stop the Death Penalty organization, “assembly and collusion against national security”, and “propaganda against the state.”