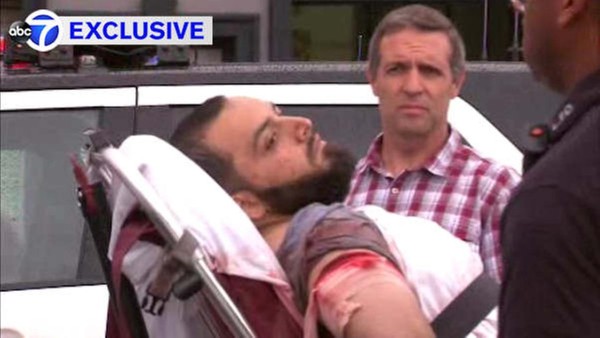 PHOTO: New York bombing suspect Ahmad Khan Rahami is placed in an ambulance after he was wounded in a gunfight with police on Monday

Since Saturday night, US news has been dominated by a series of bombings in New York and New Jersey which have wounded 29 people, three of whom are still in hospital. On Monday afternoon, suspect Ahmad Khan Rahami — a naturalized US citizen of Afghan descent — was wounded and captured in a shoot-out with police.

Just before Rahami’s capture, I spoke with BBC Three Counties Radio about the politics around the bombing in a Presidential election campaign. How will Republican nominee Donald Trump exploit the event with his aggressive approach? And can Democratic candidate Hillary Clinton succeed, in a US climate of fear, with her more measured comments about security and intelligence?

If this was a careful, rational approach to what happened, we would all be withholding judgement on what may or may not have happened. But we are in the middle of a Presidential election campaign where at least one of the candidates is not known for being, shall we say, cautious in his remarks….

The Trump campaign is based on “It doesn’t matter if the statement is true or false, a wise approach or a foolish one”. You just grab the headlines for as long as possible, then you move on to the next topic….

My grandfather used to quote P.T. Barnum, “There’s a sucker born every minute and two to take him.”