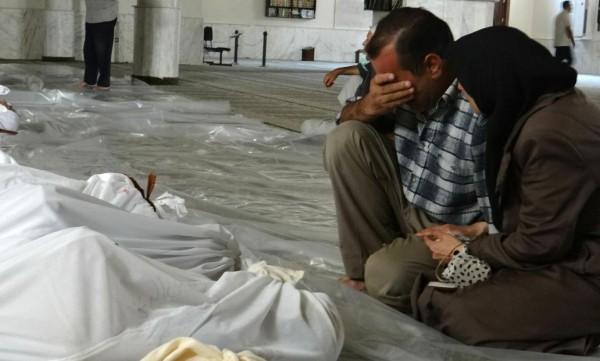 PHOTO: A couple grieve over bodies of those killed in the Assad regime’s chemical attacks near Damascus, August 2013 (Ammar al-Arbini)

The Assad regime and its backers, notably Russia, have tried a variety of explanations to dismiss the Syrian military’s chemical attacks that killed an estimated 1,400 people near Damascus in August 2013.

They initially said there were no attacks with sarin nerve agent. They said that images of the dead were staged and were actually victims of Islamic State attacks in Latakia Province in western Syria.

Then, confronted with the evidence that attacks did take place and residents of towns around the capital were indeed dead, Moscow set up the line that rebels had carried out the assaults, hoping to spur international intervention against the regime.

Despite the obvious flaws in the scenario — the munitions were not “home-made” rebel rockets but stocks from the Syrian Army; the rebels did not have capacity for attacks on the seven locations hit within two hours; rebels have never been in possession of sarin — the Assad regime and Russia maintain the fiction. They have had help not only from their fervent supporters but also journalists such as Seymour Hersh, Gareth Porter, and Patrick Cockburn.

But now the regime, for unknown reasons, has decided that a new angle needs to be promoted.

Syria’s Ambassador to the UN, Bashar al-Jaafari, brought out the shock revelation on Monday in an address to the Security Council. Reading from notes, Jaafari makes the accusation — distorting a report by two French journalists — at the 2:13.10 mark: “Laurent Fabius, the former Prime Minister, was responsible for the use of chemical weapons in Syria in August 2013.”

But why would Fabius authorize the deadly operations? Jaafari doubled down on the accusation, claiming that the sarin assault was to divert UN inspectors of earlier chemical attacks in Aleppo Province — by rebels, of course:

They wanted to prevent Dr Sellström from reaching Aleppo by any means. Therefore they used chemical weapons in Damascus with the involvement of French intelligence and the former French Prime Minister.

Jaafari offered no evidence other than the citation of the book Les Chemins de Damas (The Roads of Damascus) by Georges Malbrunot and Christian Chesnot.

However, while the journalists are critical of the French approach to Syria since the 1980s, they do not accuse Paris of carrying out the Damascus chemical attacks.

Instead, they merely argue that the French Government held back some information from informants, including the possibility that “gas had leaked following classical bombardment by the Syrian army that hit a secret rebel laboratory” — a far cry from a French-rebel “false flag” assault on the East Ghouta and West Ghouta areas.

The French Ambassador to the UN, François Delattre, responded to Jaafari:

I’m not going to revisit all the derisory and grotesque things voiced by the representative of Syria now.

I’m just going to share with you my sense of surprise. I wasn’t expecting any miracle from him, but I would have liked to have heard [him] refer to the current humanitarian situation in Syria.