US Analysis: Beyond The Donald — 4 Things to Watch at the Republican Convention 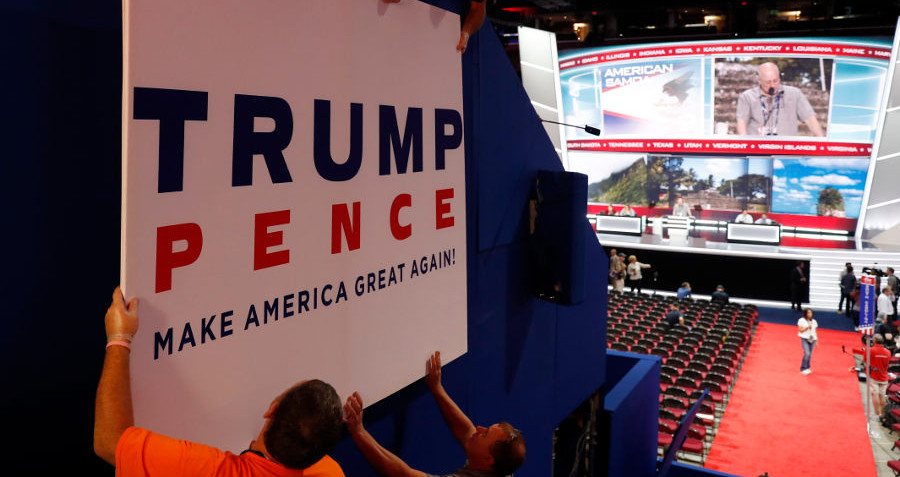 PHOTO: A convention to embrace or run way from Donald Trump?

In just a few days’ time, businessman and reality TV star Donald Trump will address the Republican National Convention in Cleveland, Ohio, as its nominee for the 2016 presidential election.

It will be an extraordinary moment of political theatre. Trump will address a Republican establishment that never wanted him to succeed and many GOP voters who deeply dislike him. And yet, Trump’s speech won’t be the most important scene to watch this week. It may not even be in the top four.

See also US Audio Analysis: Baton Rouge and the Danger of Trump

Given Trump’s extraordinary march to the nomination the Republican elite may not back him in November, even though he is running strong against Hillary Clinton in several national polls.

Even if they really think their nominee is electable, they could fear that his unpredictable, narcissistic, and often destructive behavior is just too risky. Instead, the GOP’s politicians and strategists could decide to let the White House go and focus on keeping their majorities in the House of Representatives and the Senate, both of which the “Trump effect” has put in danger.

So for anyone on Trumpwatch, here’s the inside line on what to look for:

One key document is already out in the open: most of the Republicans’ leading politicians are staying as far away from Trump as they can, including their last two presidential nominees and last two living presidents. There will be as many Trumps speaking (Donald, his wife Melania, and his children Don Jr, Eric, Ivanka, and Tiffany) as there will be senators.

Four of the six senators speaking are from the right wing of the party. Only Kentucky’s Mitch McConnell, the Republicans’ leader in the senate, and West Virginia’s Shelley Moore Capito are anywhere near the political center (and only in a relative sense); Iowa’s hog-castrating Joni Ernst, Texas’s Ted Cruz, Alabama’s Jeff Sessions, and Arkansas’s Tom Cotton are of a decidedly different hardline bent.

Only seven of the Republicans’ 247 representatives in the house will take the podium. Of the GOP’s 31 governors, only four will be seen, and two of them – New Jersey’s Chris Christie and Oklahoma’s Mary Fallin – were in contention to be Trump’s vice-presidential nominee though that job now falls to Indiana Governor Mike Pence.

The list of speakers is dominated not by party movers and shakers, but by businessmen and celebrities. There’s oilman Harold Hamm, casino owner Phil Ruffin, and Paypal founder Peter Thiel. The head of the Ultimate Fighting Championship, Dana White, will offer his wisdom, as will former underwear model and soap opera star Antonio Sabàto Jr., and golfer and Sports Illustrated swimsuit model Natalie Gulbis.

There will also be a renewed attempt to blame Clinton for the deadly attack in Benghazi, Libya in September 2012, with two of the survivors and the mother of one of the victims set to address the delegates.

All of this may feed into Trump’s so far successful narrative of a campaign appealing beyond the establishment to the American people, but it bodes ill for the party as it heads into the fight for the White House. 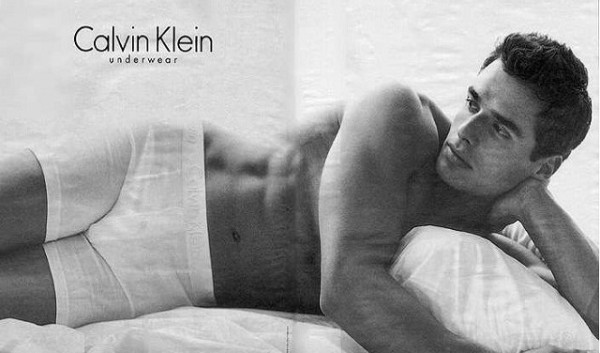 Step aside, Mitt Romney — This man will be addressing the Republican National Convention

Normally few beyond committed activists bother to read party platforms. Who recalls that in 2012 the Republican platform (or manifesto) called the judiciary’s consideration of same-sex marriage “an assault on the foundations of our society”?

However, this year the document will be an important signpost both for the Trump campaign and for the future of the GOP.

On one level, the draft 2016 statement of the party’s platform offers some common ground with Trumpisms. There is the loud but vague declaration of a campaign “to destroy ISIS [Islamic State]”. There is no mention of the Trans-Pacific Partnership, the controversial trade deal supported by many GOP leaders but opposed by Trump. And, yes, there is a reference to Trump’s notorious proposal to divide the US from Mexico with a wall.

But what’s really striking is how much of the platform goes beyond Trump – and indeed, beyond most of America.

The draft document swings even harder to the right than its 2012 predecessor. Proclaiming that “man-made law must be consistent with God-given, natural rights”, the text explicitly objects to gay, lesbian, and transgender rights. Challenging the US constitution and the Supreme Court, it calls for the teaching of the Bible in public schools because it is “indispensable for the development of an educated citizenry”. It declares that “natural marriage” between a man and a woman is most likely to result in offspring who do not become drug-addicted or otherwise damaged.

The platform is so strident that a minority of moderates are openly considering challenges to it on the convention floor.

That threat will probably be neutered, but the platform still puts the party at risk of alienating the mass of voters in the centre of the US political spectrum. 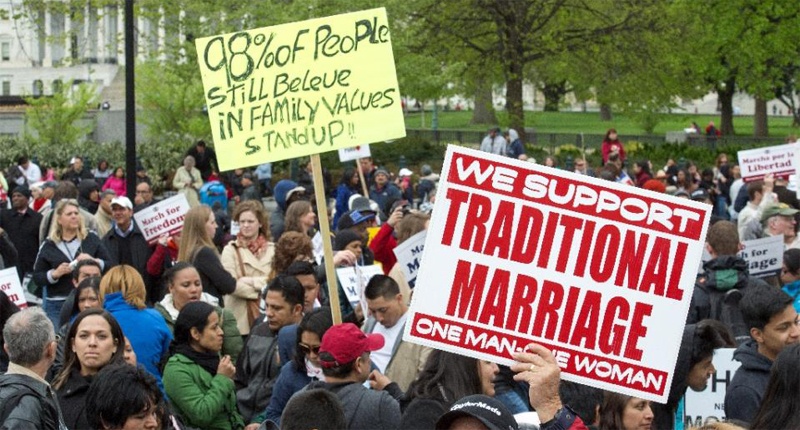 March For Marriage protest outside the US Supreme Court, April 25, 2015 (Paul J. Richards/AFP)

Given the sheer size of Trump’s distended personality, it may be hard to believe that his running mate will get in a word, let alone be significant in the presidential race. However, given the tension between The Donald and The GOP, Governor Mike Pence takes on a significant challenge.

Known as a “Christian conservative”, Pence could appeal to parts of the Republican right who’ve so far been sceptical of Trump’s ill-defined, “moderate” views on social issues (not least abortion). At the same time, Pence is a much quieter and more stable politician than some of the party’s leading firebrands – think of this year’s contender Ted Cruz, or former house speaker and 2012 runner Newt Gingrich, who lost out in the contest to become Trump’s running mate.

But will that matter? In an autumn 2015 survey of GOP voters, Pence was last in name recognition out of 18 possible presidential candidates.

That may have suited Trump, given his aversion to sharing attention with anyone. But it might not suit those in the GOP and beyond who would like a stronger politician and personality to offset some of The Donald’s perceived disadvantages.

So Pence will take the stage with a task far greater than Trump’s: to be confident enough to reassure the party establishment, its delegates, and those who are uncertain at home, and at the same time to avoid chagrining Trump by stealing the limelight.

The 2,472 delegates who formally nominate the candidates are usually just extras in the convention show, providing the color and the noise for the politics.

This year, however, they’re taking on a much more pivotal role. It’s not just a question of whether they cheer Trump’s speech, but how they cheer it – and how they look while doing so.

With Trump’s weakness among African American voters (polls this week had him losing to Clinton by 91% to 0% (yes, zero) among them in Pennsylvania and by 88% to 0% in Ohio) the TV cameras will be scanning the convention floor for any black faces. The same goes for Hispanic Americans; there’ll probably be bonus points for spotting a gay, lesbian or transgender delegate. 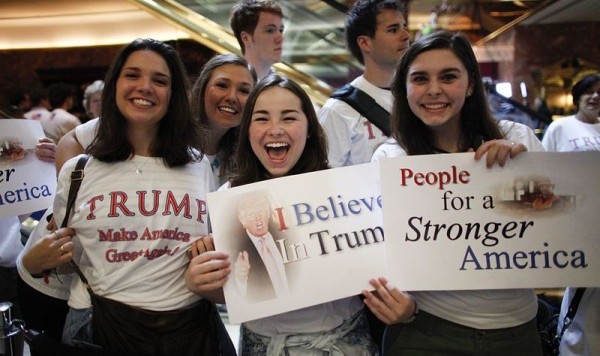 And beyond diversity, there will be an imperative to err on the side of positivity. Trump’s speeches and rallies are colored by poisonous animosity towards perceived enemies, both those in the wider world and any believed to be in the room where he’s speaking. The candidate has encouraged harassment, and there have been physical confrontations.

Any such scenes will not go down well with voters mulling who to back in November. So the convention will have to show that Trump’s declaration that he is a “unifier” – a claim as yet backed up with almost zero evidence – can convince people beyond the hall in Cleveland and across the rest of the US.