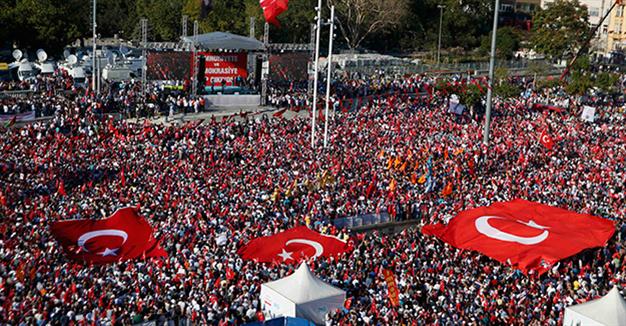 UPDATE 0900 GMT: Detention warrants have been issued for another 42 journalists.

The reporters are allegist part of the “Fethullahist Terror Organization/Parallel State Structure” accused of the July 15 coup attempt.

ORIGINAL ENTRY: Supporters of Turkey’s ruling and opposition parties rallied on Sunday, more than a week after a coup failed to overthrow the Government and President Recep Tayyip Erdoğan.

Tens of thousands of demonstrators gathered for “Republic and Democracy” Istanbul’s Taksim Square to show unity after the uprising in which at least 246 people were killed and more than 2,000 injured.

Pro-Government channels broadcast a live speech from the podium by the leader of the main opposition, the Republican People’s Party (CHP), who organized the rally.

“This is a day to unite, a day to stand up against coups and dictatorial regimes, a day to let the voice of the people be heard,” Kemal Kilicdaroglu said. “We are all together in Taksim today. Today is a day we made history all together.”

The head of Turkey’s air force — many of whose personnel were involved in the coup attempt — issued a rare statement stressing “absolute obedience” to the Chief of General Staff.

The Chief of General Staff, General Hulusi Akar, condemned the plotters on Sunday as “cowards in uniform” who had greatly harmed the nation and the army.

There were no signs of opposition to the post-coup actions of Erdoğan and the Government. Declaring a three-month state of emergency, they have detained, interrogated, or suspended more than 60,000 State personnel.

The President says the coup was orchestrated by followers of the US-based cleric Fethullah Gülen, a former ally who broke with Erdoğan in 2013 amid allegations of corruption within the Government.

Erdoğan has demanded that President Obama extradite the cleric, who lives in Pennsylvania. Obama and other US officials have insisted that evidence be produced before any extradition request is considered.

The Mayor of Ankara, Melih Gökçek, said on Sunday that Gülen uses genies to “enslave” people.

Gökçek was asked by CNN Türk, “How can Fethullah Gülen control such a large number of people? What makes him different?”

The Mayor replied with a Turkish phrase meaning “genie”:

It’s obvious that a lot people have been enslaved in previous times and then were saved. He has the ability to do this too. People have become mesmerized and enslaved.

Erdoğan has invited the leaders of the ruling Justice and Development Party (AKP), the CHP, and the Nationalist Movement Party (MHP) to the Presidential Palace in Ankara on Monday.

The President’s office said Erdoğan will thank the party leaders for their united stance against the coup attempt and discuss post-coup measures.

Erdoğan’s invitation excluded the leftist Peoples’ Democratic Party (HDP), in a criticism of their stance on the Kurdish issue.

The HDP has criticized the Government’s crackdown on Kurdish communities, especially in southeast Turkey, amid the war between Turkish security forces and the Kurdish insurgency PKK.

“Rule of Law is Important”

In a rare sign of dissent on Monday, the newspaper Hürriyet published criticism of the measures by lawyer Hüseyin Ersöz.

Ersöz challenged Erdoğan’s rule by decree, without judicial control or opposition: “The rule of law is important, so that the guilty ones do not become the injured party in the future.”

He said the decrees “cannot be used in order to limit fundamental rights and freedoms”.

Before the coup, Turkish media operated at risk of ban or State takeover if they challenged the Government. Within hours of the collapse of the uprising, more sites and publications were suspended.