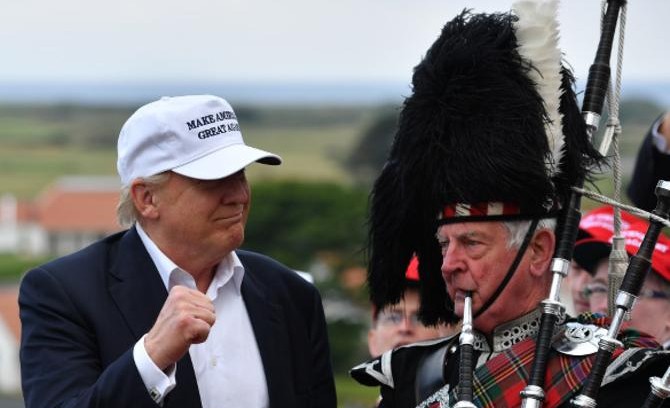 Because of a small matter called Brexit, Donald Trump’s foreign-policy visit to Scotland to open a golf course did not receive much attention, at least in the UK. Not even The Donald’s loudest pose could steal the thunder from the storm of Britain’s European Union referendum.

Surprisingly, that inattention may not be the best outcome. The University of Birmingham’s Adam Quinn, writing for the Political Science Association, explains how Trump’s Scottish journey proves that he should never be US President.

While the UK was preoccupied with the more urgent news that its people had voted to leave the European Union, a bizarre sideshow unfolded in Scotland: the possible next President of the United States visited to open a golf course. In the latest unorthodox move of a campaign by now notorious for its blithe disregard of the tried and tested conventions of politics, Donald Trump – the presumptive Republican nominee in November’s election – took two days out of his schedule to open one Trump course in Ayrshire and promote another near Aberdeen.

Some past Presidential candidates – including Barack Obama – have traveled abroad seeking opportunities to look statesmanlike. Trump may the first to break from the campaign trail to make a sales pitch for his investments in the leisure industry. Although not packaged primarily as a political event, Tump’s Scottish visit nevertheless served to highlight four key features of his candidacy.

First, he is an extremely divisive figure and a magnet for hostility. When Barack Obama visited Germany in 2008, he delivered an outdoor address to 200,000 cheering and applauding listeners. By contrast, a petition signed by 570,000 people obliged the British Parliament to debate banning Trump from entering the country – a response to his call for a ban on Muslims entering the United States. He was allowed to come in the end, though David Cameron did describe his proposal during the debate as “divisive, stupid, and wrong”. But his visit was attended by protests throughout from Scottish anti-racism campaigners, some displaying a Mexican flag – a reference to Trump’s controversial advocacy of a border wall with the United States’ southern neighbor and his characterization of Mexican immigrants as “rapists”. None of the leaders of either Scottish or UK political parties were prepared to meet him. In short, Trump may have his fans, but he has won them at the cost of earning the passionate dislike of everyone else.

Second, his business history – superficially his Number One selling point in seeking the presidency despite never having held elected office – looks more like a liability once any scrutiny is applied. Trump first got involved in Scotland a decade ago, promising to invest vast sums in a world-leading golf resort, and being appointed an “ambassador for Scottish business” by the Scottish government. Since then, relations between Trump and Scots have soured miserably. There have been legal battles going all the way to the UK Supreme Court over his insistence that wind farms should not be permitted near his site. There have been accusations of bullying and intimidation tactics to force locals to sell their homes and land at low prices, and investment and construction he promised at the outset has been achingly slow to materialize. He was stripped of the “ambassador” role in 2015 over his toxic political statements.

Third, his ignorance regarding world affairs is vast, but that never stops him from talking loudly about things he knows nothing about. Upon his arrival in Scotland and discovery that the UK had narrowly voted to leave the EU, he promptly Tweeted:

Just arrived in Scotland. Place is going wild over the vote. They took their country back, just like we will take America back. No games!

Unfortunately for Trump, every voting district in Scotland had voted solidly to Remain, something a lacerating Internet backlash was quick to point out. He followed this up throughout his visit with remarks on the referendum result that ranged from the inaccurate to the vacuous.

The topic of this week happened to be Brexit, but the pattern has been the same across every issue he has picked up during this campaign: he has a woefully thin grasp of the facts in any area of policy, yet is wholly disinclined to do any research – or even check the basics – before sounding off bombastically. This makes him beloved by a few, who think it signals authenticity, and terrifies everyone else, in both political parties.

Fourth and finally, the very fact that the visit occurred at all, given the troubles mounting for the Trump campaign at home, serves to confirm Republicans in their well-founded suspicion that this man simply cannot be trusted with the task of running a rudimentarily competent, let alone successful, campaign.

After a difficult, controversy-dogged few weeks, Trump is fading badly in opinion polls: a Washington Post/ABC News survey released on Sunday had his Democratic opponent Hillary Clinton leading by 12 points, 51% to 39%. Two-thirds of Americans now say they consider Trump not just their less preferred option but unqualified to be president. His campaign is also desperately short of money and its fundraising operation appears to be hopeless: Federal Election Commission filings released on June 21 showed his campaign had only $1.3 million in cash, compared to $42 million for the Clinton campaign.

Considering these facts, it would seem, to put it at its mildest, an odd time to leave the country for several days to pursue private commercial business. That he did so means either that Trump is oblivious to his campaign’s mounting, dire problems, or that he is aware of them but simply cares more about his business investments than his presidential campaign. Neither possibility is likely to inspire new confidence in the many Republicans officially now tied against their will to his fate.

So Trump’s UK visit highlighted several of his worst features: his past bad behavior means clouds of anger and hostility will follow wherever he goes; his business record is a trail of overblown promises followed by disappointment and recrimination; his ignorance of the world combines with his brash manner to make him an endlessly productive generator of crass and provocative verbal missteps; and when it comes to campaign discipline, he simply does what he likes, when he likes, without regard for how it will affect others, or even common sense about how it will affect himself.

With the possible exception of Rupert Murdoch, with whom Trump dined during his visit, there was scant evidence in the UK of locals who regarded his visit as anything other than a grim obligation to be politely endured for the sake of too-late-to-escape commercial ties. If he were ever – God forbid – to return as President, one suspects the protests will be rather larger, and the discomfort of the political leaders forced to engage with him amplified a thousand-fold.