Britain Opinion: Brexit, The “Enemy Within”, & Killing of Jo Cox 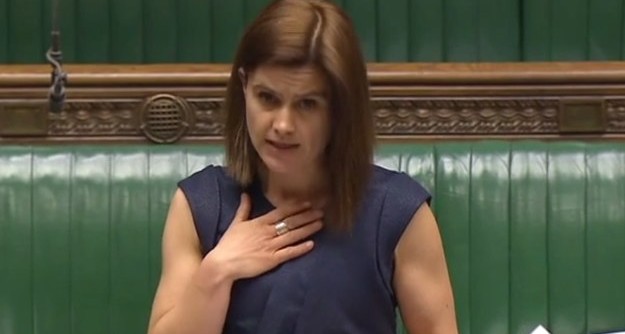 PHOTO: Jo Cox in Parliament in April “We are far more united than things that divide us”

I only met Jo Cox once. Among her numerous interests, the MP chaired Britain’s All-Party Parliamentary Group on Syria, and she had asked me to present an analysis of the need for safe zones to protect Syrian civilians.

She was gracious, charming, and animated by energy and passion. Jaded by years of failure to get any effective action over Syria, I discovered a flicker of hope when she explained what needed to be done. We parted with a promise for a discussion in the near-future.

See also Britain Opinion: A Moment to Reflect — What Did Jo Cox Stand For?

We could never quite arrange that further meeting, but I was fortunate to know much more about Jo. I worked with her staff on the Syria issue, and they never stopped talking about her devotion and unfailing optimism, even in the darkest of moments. I discovered more about her compassion and dedication to better the situation of immigrants and refugees, beginning with her humanitarian work at Oxfam and continuing into her Parliamentary service. Through social media, I followed Jo in her constituency in West Yorkshire, from visits to schools and community centers to her camping trip with a Brownie troop. On Wednesday, I read of her pride in her husband and two children: in the campaign over Britain’s European Union membership, they had joined a Remain boat in a jovial response to the invasion of a Leave “flotilla” up the River Thames in London.

Now Jo Cox is dead, shot and stabbed by a 52-year-old man at her constituency surgery on Thursday.

She was killed, not just because of her attacker’s “mental health problems” but amid the language of a political campaign which fed anger and anxiety. She was killed because of her decency in a time in which the indecent holds the lower but louder ground.

The promotion of Brexit often turns on the declaration of the “enemy”. The European Union is an enemy, foreshadowed by “Hitler’s wartime Reich”. European courts are a threat. Immigrants are going to overrun Britain. Refugees will take over “our” islands.

On Thursday morning, Nigel Farage — head of the UK Independence Party and one of Leave’s leading campaigners — proudly unveiled a poster which depicted the swarm of refugees bringing Britain to “Breaking Point”: 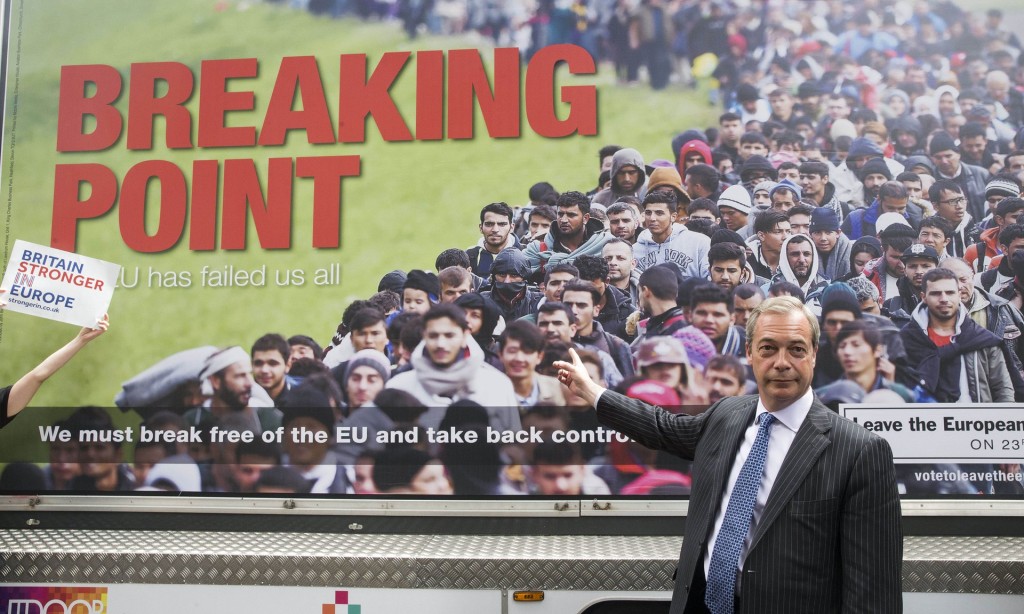 In such a Britain, it only takes a small jump to consider supporters of the rights of immigrants or advocates for compassionate treatment of refugees as an “enemy”, subverting the UK from within. Farage warned last month: ”

The UKIP leader speaks of a British Muslim “fifth column living within our country, who hate us and want to kill us”. Britain First explicitly labels the new Mayor of London, Sadiq Khan, an “enemy of Britain”: “[His election is] a nail in the coffin of our great country and an insult to the millions of our ancestors who died for [it].”

Jo Cox was also one of those possible enemies within. In her maiden speech to Parliament last year, she said:

Our communities have been deeply enhanced by immigration, be it of Irish Catholics across the constituency or of Muslims from Gujarat in India or from Pakistan, principally from Kashmir.

While we celebrate our diversity, what surprises me time and time again as I travel around the constituency is that we are far more united and have far more in common with each other than things that divide us.

As he responded by taking Jo Cox’s life yesterday, her killer shouted “Britain First!”, according to witnesses. Police are investigating his links to right-wing groups.

There is no direct connection between the attacker and the leaders of the Brexit campaign. They will be quick to remind us of this, as they speak of a “total tragedy” and how it is “appalling a MP should lose her life simply doing her best for constituents”.

Politicians did not put the gun and knife in the attacker’s hand. However, in a climate of suspicion and hatred, they provided corrosive words which could eat away at humanity, images that could resonate with a man’s deranged belief of how to save Britain from its enemies.

This was a man who could see a war with the EU, in which Britain’s “heroes of Europe” were held against the new version of “Hitler’s Reich”. He could see the poster of the hordes invading. He could see queues of Syrian refugees — the same refugees for whom Jo Cox sought some measure of security from bombing, sieges, and displacement — into the “Breaking Point” for the UK.

In Orlando, Florida on Sunday, a man took the lives of more than 50 people because he listened to the rhetoric of a group that proclaimed that homosexuality is evil and that Western culture is immoral.

Five days later, one of Britain’s finest MPs — one of the finest people in public life whom I have ever met, if only far too briefly — is dead because a man turned unity into grounds for fear and compassion into a reason to hate.

We are left to carry on. And so I hold onto the far different rhetoric of Jo Cox’s husband Brendan Cox, who wrote on Thursday amid the grieving and pain:

Jo believed in a better world and she fought for it every day of her life with an energy, and a zest for life that would exhaust most people.

She would have wanted two things above all else to happen now, one that our precious children are bathed in love and two, that we all unite to fight against the hatred that killed her. Hate doesn’t have a creed, race or religion, it is poisonous.

Jo would have no regrets about her life, she lived every day of it to the full.